A Monster in the Heart: Edward May’s A Most Certaine and True Relation (1639)

Edward May, A most certaine and true relation of a strange monster or serpent found in the left ventricle of the heart of John Pennant. . . (London: George Miller, 1639).

When John Pennant passed on October 6, 1637, at the age of twenty-one, the young man’s family began investigating. His aunt and uncle, Sir Francis and Lady Herris, called for a surgeon to perform an autopsy, accompanied by physician Edward May, who relates the following tale. Pennant’s organs were in a mixed state: his bladder “full of purulent and ulcerous matter”; one kidney was “consumed”, the other “as big as any two kidnies”; the lungs were reasonably good; and, while part of his liver had an irregular growth, that could be chalked up to “his writing profession”. It was the heart that seemed most impacted — Pennant’s left ventricle was “as hard as a stone” and had gathered “all the blood that was in his body left”. But May and the surgeon discovered more than blood. Cutting further into the organ, they perceived “a carnouse [fleshy] substance. . . wreathed together in foldes like a worme or Serpent”, which the doctors subdued with a circle of garlic, just in case it remained alive.

How did a serpent get into Pennant’s heart? May is not sure, but begins assembling evidence. It may have lived there for three years, when the youth stopped buttoning his “Doublet in the Morning, but [chose to] be open breasted in all weathers”. The doctor then turns to medical literature, referencing a case in John Stow’s 1586 chronicle, which seems to describe equine heartworm. While we now know that humans are rarer hosts for Dirofilaria than horses or dogs, Stowe made a deduction that the parasite might be present in our hearts as well. May has no problem acknowledging that wormy creatures can thrive within the body — for he casually recounts how people have been known to “vomit Yeeles [eels] and Serpents of strange forms” — but believes they usually live in the stomach and rarely pass to the heart. 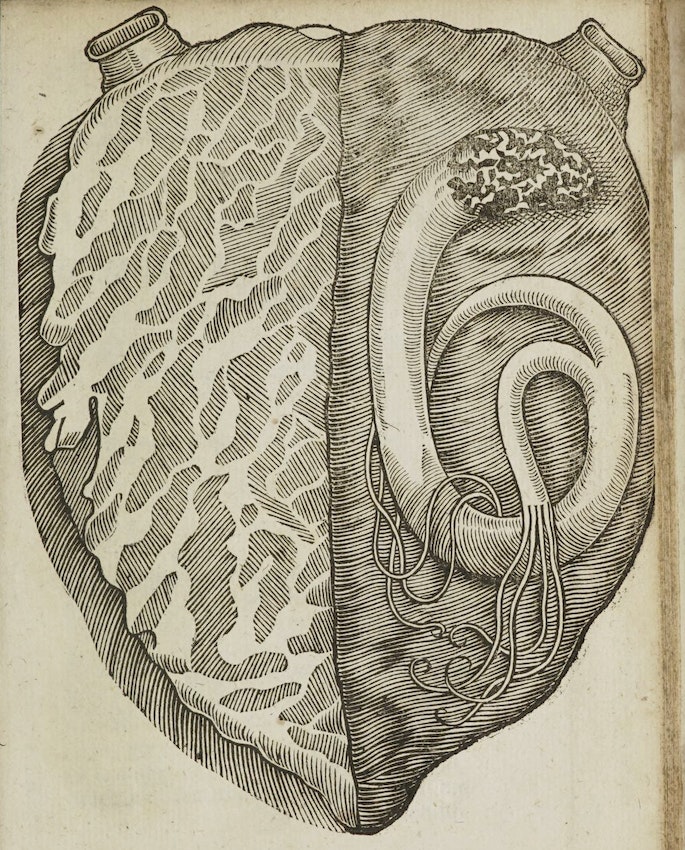 This “most certaine and true relation”, like other early-modern medical treatises, relates empirical observation to classical knowledge, moving, in a matter of pages, from a history of the individual’s illness to “How Hippocrates and the Ancients are to be understood”. More curious, it seems the parasite transmitted some of its higher qualities to the host. Before his death, John Pennant “had an excellent Eye”, “extraordinarily sharpe”, “like the Eye of a Serpent”, which leads May to an affirmation of what is known as the doctrine of signatures, a belief that proximity engenders resemblance: “secret, unusuall and strange inward diseases, doe send forth some radios, or signatures from the center”. He hopes that these signatures might be recognized by other physicians before serpents kill their patients too. As for this particular monster, it was sewn back into Pennant’s corpse, honoring Dorothy Pennant’s wishes for her son: “As it came with him, so it shall goe with him”.

Centuries later, the creature still puzzles medical researchers. Thankfully, it seems that it was not a worm, serpent, or extraterrestrial alien eel. Writing in Tropical Medicine and Hygiene (1977), D.A. Denham recounts wondering if the “monster” was in fact the first reference to Dirofilaria immitis in humans, but says he was “quickly disabused” of the notion. Certain that it is not a parasitic worm, Denham thinks the most likely explanation for the “monster” is merely a misidentified blood plasma clot, formed after death, and in no way related to Pennant’s illness. Writing in a 2001 issue of The Lancet, Ruth Richardson agrees with Denham, and exonerates Dorothy Pennant, whom May had called “babish” for destroying medical evidence, finding an enduring “disjunction between public and professional notions of what appropriately belongs to the dead”. Perhaps this is a mystery best left undisturbed. 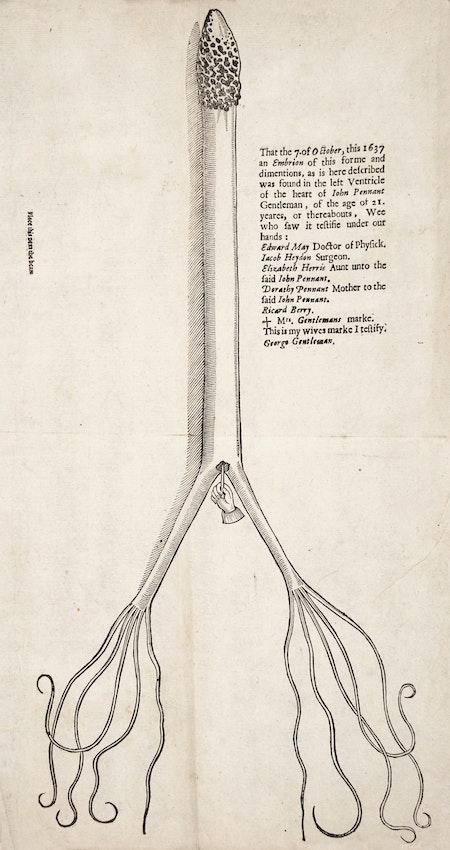