Popular in the seventeenth and eighteenth centuries, a "commonplace book" was a notebook used to gather quotes and excerpts from one's literary wanderings — a kind of personalized encyclopedia of quotations. In "A Letter of Advice to a Young Poet" from 1721, Jonathan Swift remarked that a commonplace book is something that “a provident poet cannot subsist without, for this proverbial reason, that great wits have short memories”. The English physician and philosopher John Locke (1632-1704) was all too aware of the grip of amnesia and the shortness of memory. In his seminal Essay Concerning Human Understanding (1689) he wrote of his rival Blaise Pascal, who he named as the “prodigy of parts”, who “forgot nothing of what he had done, read, or thought.” Locke, in reaction, attempted to simulate Pascal’s "hyperthymesia", not in the mind, but upon the page: through the construction of a system of "commonplacing", as a form of what Swift called “supplemental memory”.

Locke's method built on a long tradition of commonplace note taking, most famously John Milton’s from the middle of the century. Locke was one of the first to formalise a method though. Developed over 25 years of personal note-taking, it was formalised in his publication of Méthode nouvelle de dresser des recueils (1685), later translated into English as New Method of Organizing Common Place Books (1706) and published posthumously. His technique of "commonplacing" always began with a stack of white, empty sheets bound together into a single volume. At the front he placed an index of two pages, which listed every letter of the Latin alphabet in one column next to each vowel (though only for the combinations that were possible, hence just "Q.u"). 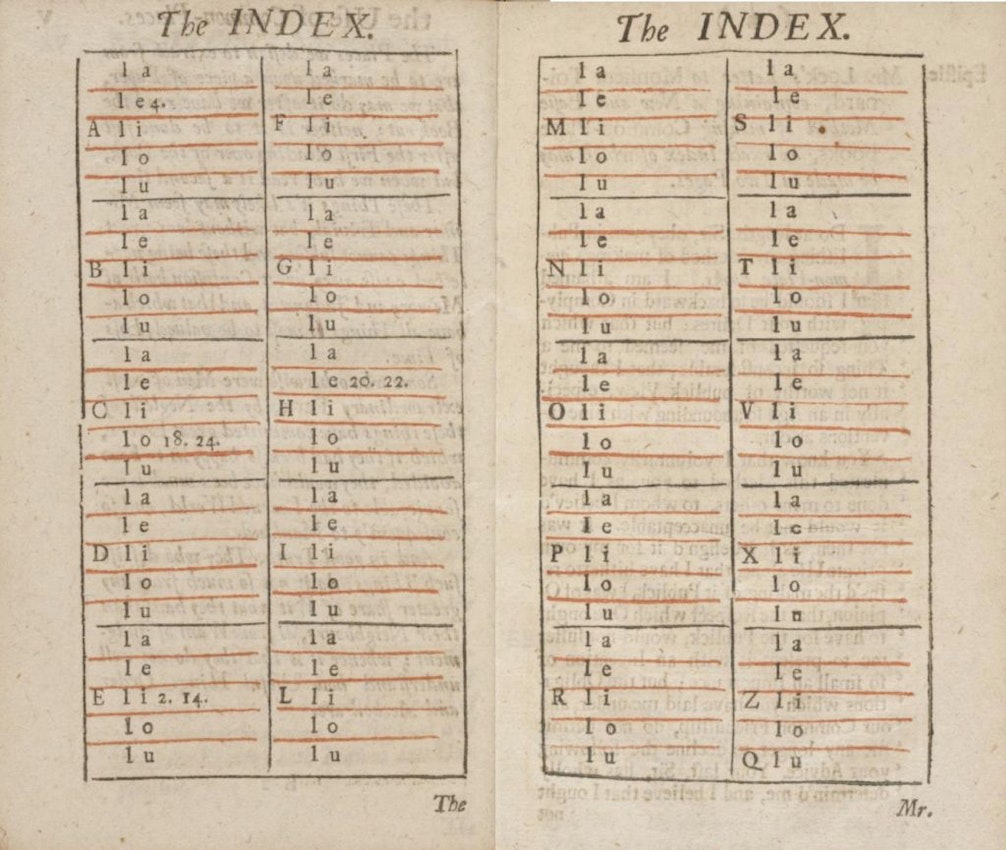 John Locke's double-page index, as printed in the English translation of New Method for Common-Place Books (1706).

From this index, Locke unfolds his method:

When I meet with any thing, that I think fit to put into my common-place-book, I first find a proper head. Suppose for example that the head be EPISTOLA. I look unto the index for the first letter and the following vowel which in this instance are E. i. If in the space marked E. i. there is any number that directs me to the page designed for words that begin with an E and whose first vowel after the initial letter is I, I must then write under the word Epistola in that page what I have to remark.

The ingenious utilisation of the second vowel allowed Locke, and those that followed his method, to systematically organise and be able to locate a great range topics in the limited space of the double page index (as opposed to simply arranging alphabetically). The large array of words encapsulated by an initial letter and vowel combination also meant, in the main notes area, less wastage of paper than a more traditional alphabet-based model might encourage (where each letter was preassigned a number of pages), and more structure than a purely chronological approach would offer. 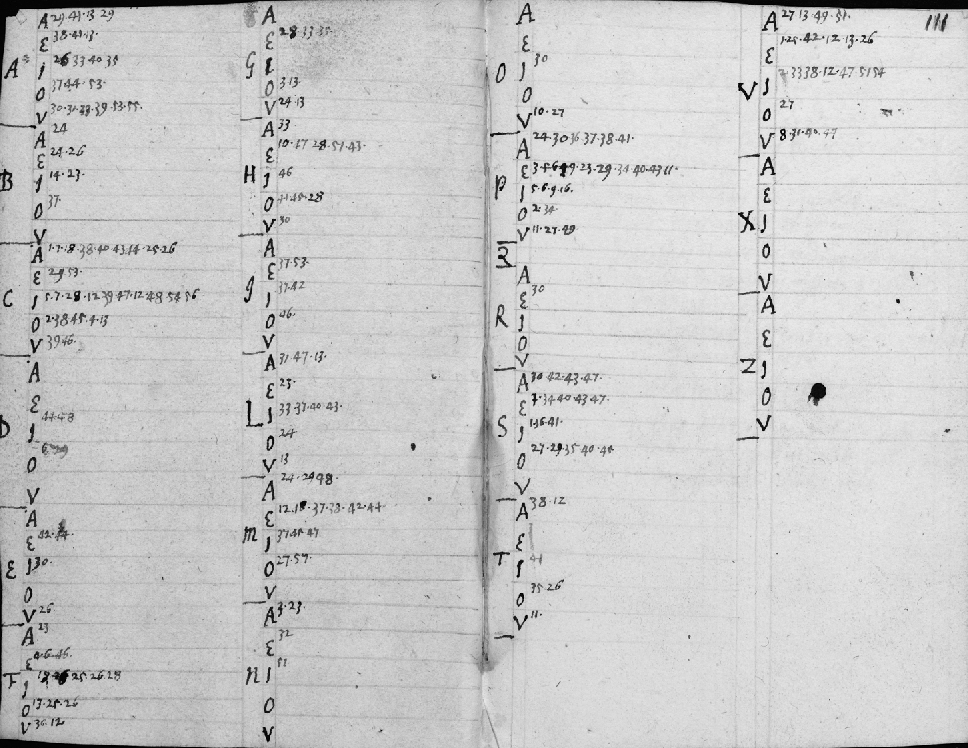 In general, the commonplace book would result in a wonderfully tangled mixture of reading and writing, where disparate ideas could be fruitfully thrown together onto the same pages, fixed together only by a formal method (and of course similar word roots). According to the historian Robert Darnton, this led to a very particular structuring of knowledge: commonplace users "broke texts into fragments and assembled them into new patterns by transcribing them in different sections of their notebook." It was a mixture of fragmented order and disorder that anticipated a particular form of scientific investigation and organisation of information. Locke’s humble two page method, in this sense, prefigures libraries filled with volumes of encyclopedias, from Carl Linnaeus’s Systema Naturae (1735) to Luke Howard's classification of clouds.

With the rise of printing technologies, common-place books reflected an anxiety with a deluge of new information still present today. John Locke was concerned with not just how to access it, but how to organise and recall it. In the age of the internet, as Steven Johnson writes, we are equally led into “common places”, where associations are constructed through happenstance (e.g. from a Google search); our job, he adds, is to sort that information out whilst also enabling connections to germinate.