John Reynolds, Triumphs of Gods Revenge and the Crying and Execrable Sin of (Wilful and Premeditated) Murther (London: A.M. for William Lee, 1670)

We don’t know the year of John Reynolds’ birth or death, but according to the Dictionary of National Biography, he “flourished” between 1620 and 1640, at which time he must have been in his thirties and forties (give or take a few years). Born in Exeter — and known to his contemporaries as “John Reynolds, merchant of Exeter”, to distinguish him from other writers of the same name — he traveled on business to France, Spain, and probably Italy, where he collected the stories that make up his six-volume Triumphs of Gods Revenge and the Crying and Execrable Sin of (Wilful and Premeditated) Murther — one of the earliest examples of “true crime” writing in English.

As in most true crime writing, Reynolds is careful to insist he’s writing about murder only in order to underscore the punishment meted out to murderers:

If our contemplation dive into elder times, and our curiositie turne over the varietie of ancient and moderne Histories (as well Divine as Humane) wee shall find that Ambition, Revenge, and Murther, have ever prooved fatall crimes to their undertakers: for they are vices which so eclipse our judgements, and darken our understandings, as we shall not only see with griefe, but find with repentance, that they will bring us shame for glory, affliction for content, and misery for felicity[.]

This piously moral declaration looks a little suspicious today, especially if we consider the obvious relish Reynolds takes in his stories of marriages gone wrong:

Idiaques causeth his sonne Don Ivan to marrie Marsillia, and then commits Adultery and Incest with her; She makes her Father in Law Idiaques to poyson his old wife Honoria, and likewise makes her owne brother De Perez to kill her Chamber-maid Mathurina; Don Ivan afterwards kils De Perez in a Duell; Marsillia hath her brains dasht out by a horse, and her body is afterwards condemned to be burnt; Idiaques is beheaded; his body consumed to ashes, and throwne into the ayre. 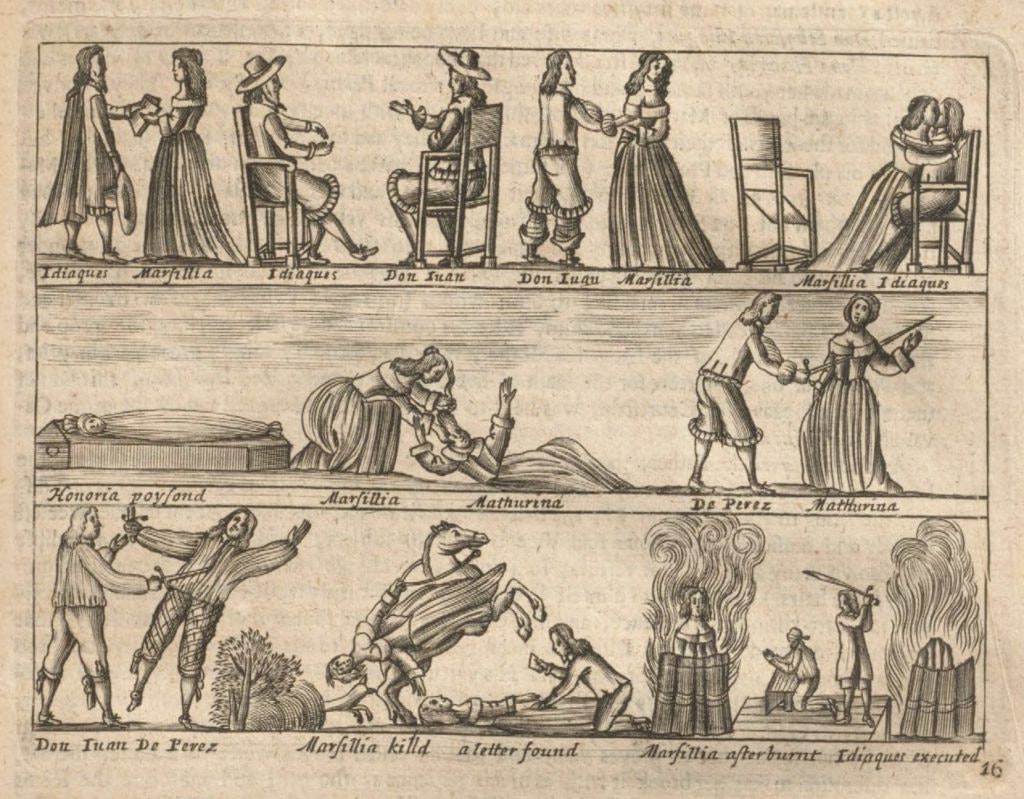 The Triumphs of Gods Revenge was a politically charged work. The first volume was published in 1621, during the era of the Spanish Match — when the Count of Gondomar, the famously “scheming” Spanish ambassador, was trying to push Protestant Prince Charles into a marriage alliance with the Catholic Maria Anna of Spain. “It has been speculated,” the scholar Berta Cano-Echevarría writes, “that Reynolds produced this collection of tales on the violent consequences of unhappy marriages as an acceptable way of promoting support for the Protestant cause in England”. (This political/religious subtext was partly what led the Jacobean playwrights Middleton and Rowley to adapt one of Reynolds’ murder stories for their 1622 play The Changeling.)

There was also a narrative advantage to setting his stories in Catholic countries on the continent, since by doing so Reynolds could describe these places, to quote Cano-Echevarría again, “(in implied contrast to England) as sites of deceit and debauchery”.

The Triumphs of Gods Revenge strikes us today as above all a rich resource for old murder tales. Jealousy and incest, sadism and cannibalism, death by poisoning and by lightning bolt, by pistols and by immurement, abound. Every element of Gothic fiction and melodrama seems already present in Reynold’s pages:

Catalina causeth her Wayting Mayd Ausilva two severall times attempt to poyson her owne Sister Berinthia; wherein fayling, shee afterwards makes an Empericke, termed Sarmiata, poyson her said Mayd Ansilva: Catalina is killed with a Thunder bolt, and Sarmiata hang'd for poysoning Ansilva. Antonio steales Berinthia away by her owne consent; whereupon her Brother Sebastiano fights with Antonio, and kills him in a Duell: Berinthia in revenge hereof, afterwards murthereth her Brother Sebastiano; she is adjudged to be immured betwixt two Walls, and there languisheth and dyes. 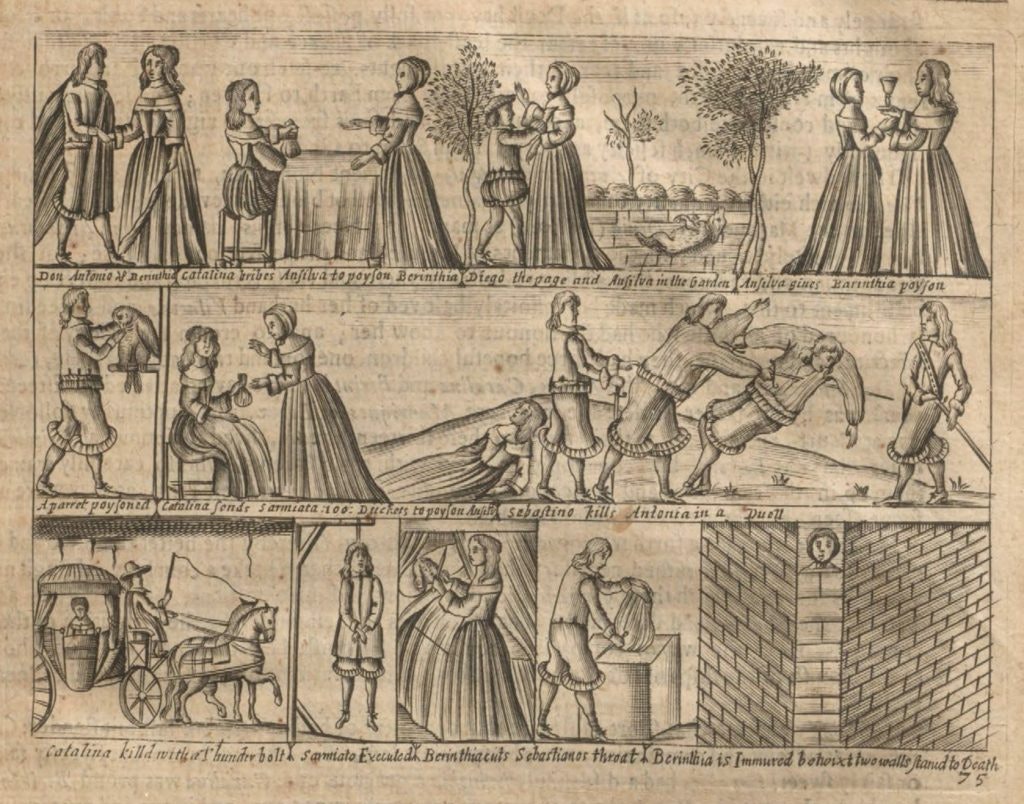 Sanctifiore (upon promise of mariage) gets Ursina with childe, and then afterwards very ingratefully and treacherously rejecteth her, and marries Bertranna: Ursina being sensible of this her disgrace, disguiseth herselfe in a Friers habit and with a case of Pistols kils Sanctifiore as he is walking in the fields, for the which shee is hanged. 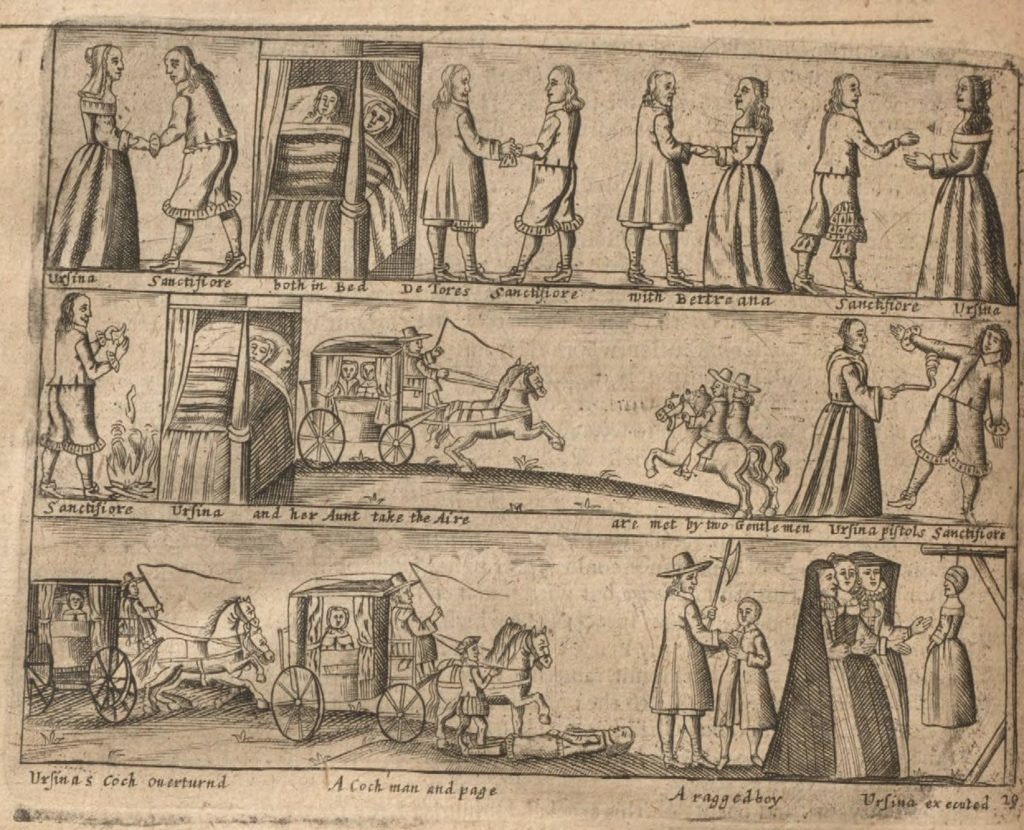 Reynolds’ books were popular enough to be printed in a single volume in 1635 — and reprinted many times after that, with illustrations depicting the wages of sin he described. The woodenness of the human figures being stabbed, tortured, and tossed into holes only adds to the horror.

You can peruse captioned images from this remarkable early-modern true crime below. You can also page through a digital scan of the printed version above, or read a clear copy of the text here.

Autefelia causeth La Fresnay an Apothecary to poyson her Brother Grand Pre and his Wife Mermanda, and is likewise the cause that her sayd Brother kills de Malleray her owne Husband in a Duell. La Fresnay condemned to be hanged for a Rape, on the Ladder confesseth his two former Murthers, and sayes that Hautefelia seduced and hired him to performe them: Hautefelia is likewise apprehended. And so for these cruell Murthers they are both put to severe and cruell Deaths.

Pisani betrayeth Gasparino of his Mistrisse Christeneta. Gasparino challengeth Pisani for this Disgrace, and kills him in the Field; He after continueth his Sute to Christeneta. She dissembles her Malice for Pisani his Death. She appoynts Gasparino to meet her in a Garden; and there causeth Bianco and Brindoli to murther him. They are all three taken, and executed for the same.

Mortaigne, under promise of Marriage, gets Iosselina with child, and after converting his love into hatred, causeth his Lackey▪ La Verdure and La Palma to murther both her and her young sonne. The Iealousie of I [...]ella to her Husband La Palma is the cause of the Discovery hereof. They are all three taken and executed for the same.

Bertolini seekes Paulina in marriage, but shee loves Sturio, and not himselfe: hee prayes her Brother Brellati his deare friend, to sollicit her for him, which he doth, but cannot prevaile: whereupon Bertolini lets fall some disgracefull speeches, both against her honour and his reputation: for which Brellati challengeth the field of him, where Bertolini kills him, and he flies for the same. Sturio seekes to marry her, but his Father will not consent thereunto, and conveyes him away secretly: for which two disasters, Paulina dies for sorrow. Sturio finds out Bertolini, and sends him a challenge, and having him at his mercy, gives him his life at his request: he afterwards very treacherously kils Sturio with a Petronell in the street from a window: he is taken for this second murther, his two hands cut off, then beheaded, and his body throwne into the River.

Maurice like a bloody villaine, and damnable sonne, throwes his Mother Christina into a Well, and drownes her: the same hand and arme of his wherewith he did it, rots away from his body; and being discrazed of his wi [...]s in prison, hee there conf [...]h this foule and inhumane murther, for the which he is hanged.

Romeo (the Laquay of Borlary) kils Radegonda, the Chamber maid of the Lady Fellisanna in the street, and is hanged for the same; Borlary afterwards hireth Castruchio (an Apothecary) to poyson her Husband Seignior Planeze, for the which Castruchio is hanged, and his body throwne into the River, and Borlary is beheaded, and then burnt.

Beaumarays, and his brother Montaigne, kill Champigny, and Marin (his second) in a Duell; Blancheville (the widdow of Champigni) in revenge thereof hireth Le Valley (who was servant to Beaumarays) to murther his said Master with a Pistoll, the which he doth, for the which Le Valley is broken on a wheele, and Blancheville hanged for the same.

Alphonso poysoneth his owne Mother Sophia, and after shoots and kils Cassino (as hee was walking in his Garden) with a short Musket (or Carabyne) from a Window. Hee is beheaded for those two murthers, then burnt, and his ashes throwne into the River.

Pont Chausey kils La Roche in a Duell. Quatbrisson causeth Moncallier (an Apothecary) to poyson his owne Brother Valfontaine, Moncallier after fals, and breaks his necke from a paire of staires. Quatbrisson likewise causeth his Fathers Miller to murther, and strangle Marieta in her Bed, and to throw her body into his Mill-Pond; Pierot the Miller is broken alive on a wheele, and Quatbrisson first beheaded, then burnt for the same.

Imperia for the love shee beares to young Morosini, seduceth and causeth him (with his two Consorts, Astonicus, and Donato) to stifle to death her old Husband Palmerius in his bed; Morosini misfortunately letting fall his gloves in Palmerius his Chamber that night which hee did it, they are found by Richardo the Nephew of Palmerius, who knowes them to be Morosinies, and doth thereupon accuse him and his Aunt Imperia, for the murther of his Vncle; So they together with their accessaries Astonicus and Donato, are all foure of them apprehended and hanged for the same.