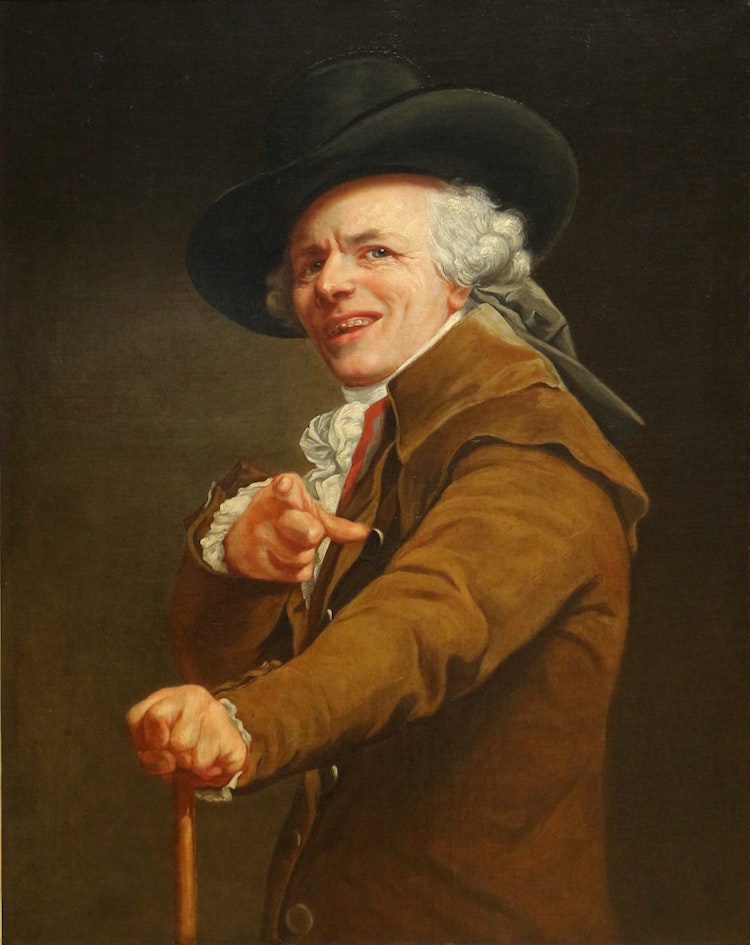 Joseph Ducreux, "Self-portrait of the Artist in the Guise of a Mocker" — Source

The painter Joseph Ducreux, born in Nancy, France, in 1735, was a minor aristocrat who began to paint during the final decades of the Ancien Régime. (In fact, he drew the last portrait of Louis XVI before the king was guillotined.) In 1789 or ’90, he emigrated to London with many other aristocrats, before returning to Paris in 1793. For the last ten years of his life, he continued his career with the assistance of Jacques-Louis David (a friend and younger painter in favor with the revolutionaries) and became the host of an informal salon for artists and musicians.

Ducreux specialized in portraits, including those of Choderlos de Laclos (author of Liaisons dangeureuses) and Maria Theresa of Austria, but he is perhaps best remembered today for his strikingly modern self-portraits, which depict him in exaggerated, mime-like postures not at all common in either portraits or self-portraits at the time.

These postures included “surprise in terror”, in which Ducreux raises his hand up defensively with mouth agape, and “the silence”, in which he puts a finger to his pursed lips (in the suspected later version his shoulder's covered in a white dusting from powdered wig). Other self-portraits show him yawning in decidedly unsexy dishabille, with a white nightcap crowning his head, or pointing directly at the viewer and grinning. The latter, so the title tells us, is meant to depict an expression of mocking, but, at least nowadays, more readily presents itself as depicting a friendlier encounter with the viewer (though retaining the smugness), like a man catching sight of an old friend across a crowded room, or a politician trying to charm a voter.

These unorthodox self-portraits were remarkable artworks for their time — evidence of Ducreux’s disregard for the classical styles of portraiture dominant in his day and enthusiasm for the study of physiognomy and the expressive capacities of the human body and face. With their unusual combination of directness. ambiguity, and exaggerated expression they earned Ducreux a mixed reception in his lifetime but a strong and curious rebirth in the age of social media and the all-powerful "meme". Indeed, they seem to have been virtually waiting, through the centuries, to be adorned with witty captions. Since, 2009, "Self-portrait of the Artist in the Guise of a Mocker", in particular, has appealed to meme-makers — its anachronistic aspect, of such a modern-seeming expression from so many centuries ago, providing the perfect impetus to get playful with rap lyrics, translating them into what Know Your Meme calls "archaic rap". In 2011, Steve Buscemi's face got involved, the now-photoshopped figure spouting similar faux-old translations of lines from Buscemi's films such as The Big Lebowski.

For more on old art and memes check out our essay "Early Modern Memes: The Reuse and Recycling of Woodcuts in 17th-Century English Popular Print" by Katie Sisneros; and for more on the expression of emotions and painted portraits see our essay "The Serious and the Smirk: The Smile in Portraiture" by Nicholas Jeeves.

The original Joseph Ducreux meme from 2009 (creator unknown), which plays on the rap lyrics “Fuck bitches, get money" from Notorious B.I.G’s 1995 song Get Money — Source