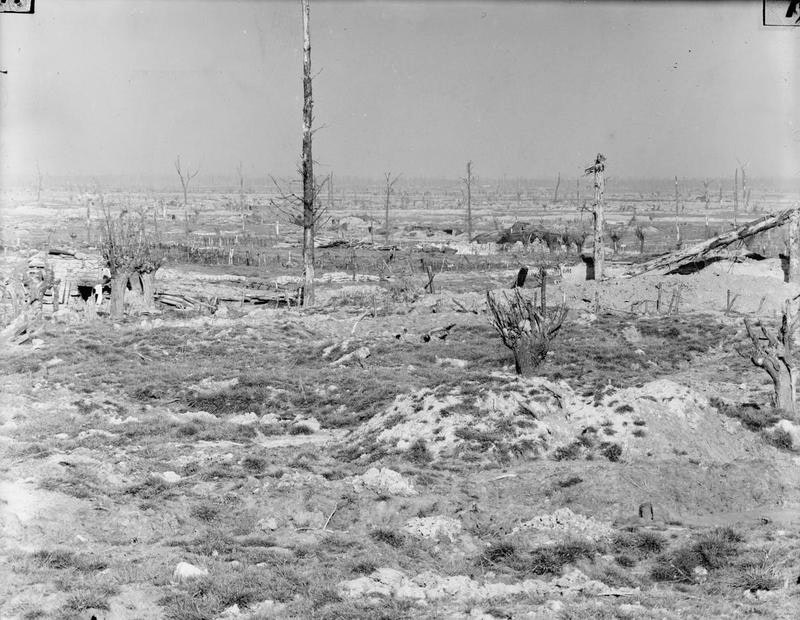 One hundred years ago this year, after four years of unimaginable carnage, the first world war finally came to an end. In its wake the conflict left tens of millions dead, many more injured, and vast swathes of land decimated by an estimated 1.5 billion shells on the Western Front alone. The devastation was unprecedented and, thanks to advances in photography, so was its documentation. In addition to the amateur snaps captured by soldiers (despite most militaries forbidding it), and photographs taken for journalistic purposes, photography played a vital military role, specifically in the areas of reconnaissance both aerial and terrestrial. It is a collection of photographs belonging to the latter camp that we've chosen to focus on in this post. They were found in a collection housed at the Imperial War Museum titled "British Official Panoramas Of The Western Front 1914–1918" which contains thousands of battlefield panoramas, each made by piecing together anything from three to thirty regular sized photographs. To capture these photographs army photographers would have to have spent long periods with their head above the parapet - a view so dangerous it was only normally witnessed via the medium of a trench periscope or mirror. Once developed in mobile darkrooms and pieced together, the resulting panoramas could be studied and annotated with information about enemy positions and key locations relating to future operations.

Today, a century after their strategic function has passed, the photographs offer an unusual and haunting portrait of the front. Indeed, they carry an emotive quality seemingly enhanced by their utilitarian purpose. These are not images chosen to sell newspapers, for propaganda, framed and shot to pull heartstrings or elicit outrage. They rather come to us direct, raw, from the stark and naked reality of a war in deadly flow. Though despite this immediacy they seem oddly quiet, empty, mostly entirely devoid of human forms — the only corpse we can see being the land itself, battered, contaminated, whole forests destroyed. It is an emptiness which seems to speak at once of the void the war left in so many families back home, and of an odd sense of peace the other side of the shells — a peace which reigned once the armistice was signed, even if it would only last another couple of decades.

For more on the topic we recommend checking out The Battlefields of the First World War: The Unseen Panoramas of the Western Front (2005) by Peter Barton and a foreword by Richard Holmes. It includes many of the panoramas in the Imperial War Museum's collection along with "poignant personal photographs and the recollections of the soldiers caught in action in the battles shown". Also related is Simon Armitage's book Still (2016), a sequence of sixteen poems written in response to twenty-six panoramic photographs of Somme battlefields picked from the Imperial War Museum archives.