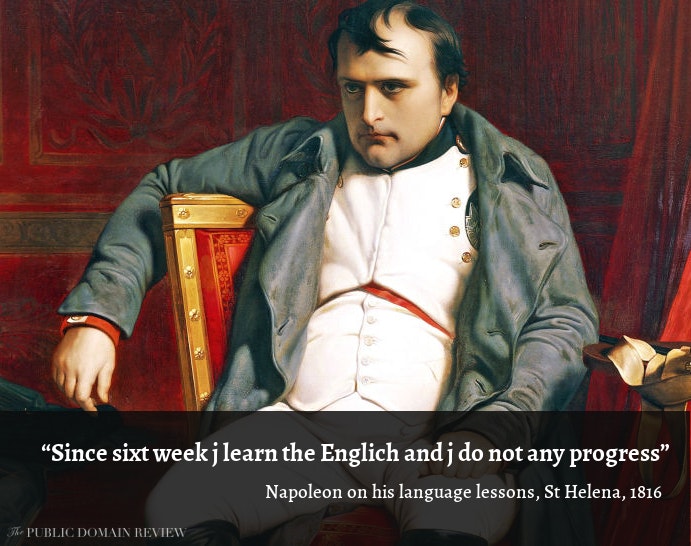 Napoleon had had a rollercoaster eighteen months. First he had been forced to abdicate as Emperor of France and exiled to the island of Elba. Then he had managed to escape, march on Paris, and retake the throne. Finally a crushing loss at Waterloo had led to exile once again, this time to a far more remote island called Saint Helena. The watery walls of his new South Atlantic prison were at least a thousand miles thick in every direction.

The British had agreed to provide Le Petit Caporal with plentiful wine, meat, and musical instruments, but he could not have what he most craved — family, power, Europe. To make matters worse, he had virtually nothing to read. Newspapers were banned, and those he did manage to get his hands on were nearly all in English. That was the main reason why, on January 16, 1816, three months after landing on the island, he decided to learn the language of his captors. For the following three months he studied nearly every afternoon. The daily labour produced a mixed bag of verbal fruit; a sometimes bitter, sometimes sweet taste of his time on the island where he would end his days, six years later, aged 51.

Far more than rote learning conjugations, declensions, and articles, Napoleon enjoyed scribbling his thoughts in French and then translating them into English. The results were often wistful:

My wife shall come near to me, my son shall be great and strong if he will be able to trink a bottle of wine at dinner j shall [toast] with him… / The women believe they [are] ever prety / The time has not wings / When you shall come, you shall see that j have ever loved you.

His English teacher was Count Emmanuel de Las Cases, an historian and loyal supporter who had been allowed to voyage with him to Saint Helena. The Count would later turn their fifteen months of conversations into a publishing sensation, Mémorial de Sainte-Hélène (1822–23). The book recorded Napoleon’s day-to-day life on the island, his sentiments on religion and philosophy, his argument that the ideals of the French Revolution had lived on in the empire. It would be printed and reprinted throughout the century, and do much to turn the perception of Napoleon from a dictator into a liberator — a slayer of tyrannical dynasties more than a founder of his own. It is also the primary window through which we can view the development of Napoleon’s English.

According to Count Las Cases, his pupil “had an extraordinary intelligence but a very bad memory: this latter particularly upset him.” As a result, Napoleon grasped English grammar with an impressive ease but vocabulary with a painful slowness.

When it came to speaking English, the Count relates, “The pupil wished only to recognise [French] pronunciation.” Perhaps the former emperor could not bear to do his vanquishers the honour of speaking their language their way. Perhaps his approach to English mirrored his general approach to foreign territory — he liked to make it his own:

Even in his own language, [he] had a way of garbling proper nouns; as for foreign words, he pronounced them just as he pleased. Once they left his mouth, whatever way he had pronounced them, they remained forever that, because he had, once and for all, lodged them in his head in that way.

Out of this situation arose a completely new language, Las Cases tells us, only comprehensible to pupil and teacher. Betsy Balcomb, a teenaged resident of the island, agreed: “The Emperor’s English, of which he spoke a few words, was the oddest in the world.” But Napoleon stuck at his language-learning. Las Cases suggests that he devoted up to five hours every afternoon to it, “sometimes with an application that was entirely admirable, sometimes with visible dislike.” Through this effort he achieved his goal of reading the newspapers. And he “could, more or less, have made himself understood in writing.”

We can judge that last claim for ourselves. Because Napoleon was an insomniac, he used to write English letters in the middle of the night, for Las Cases to correct the next day. In one that survives, dated 7 March, 1816, Napoleon calculates how far he has come towards proficiency and how much work he has left to get there:

Count lascases — Since sixt week j learn the Englich and j do not any progress. Six week do fourty and two day. If might have learn fivity word four day I could know it two thusands and two hundred. It is in the dictionary more of fourty thousand; even he could must twinty bout much of tems for know it our hundred and twenty week, which do more two yars. After this you shall agrée that to study one tongue is a great labour who it must do into the young aged. 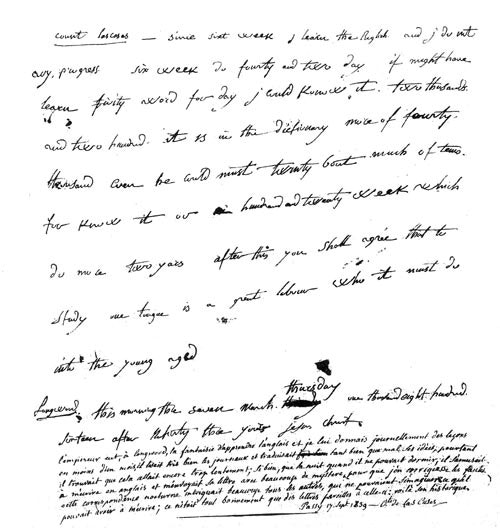 Comprehensible? Maybe. Idiosyncratic? Certainly. Napoleon never stopped insisting on writing “j” (as in the French “je”) instead of “I”. Nonetheless his writerly confidence was growing. That same month he even played a joke on Las Cases in English. He anonymously sent to his teacher a review of one of his books, declaring it to be not without “somme fautes but you schal may corect them in the next edition.” Las Cases tells us (semi-plausibly) that he was completely taken in by his pupil's fraudulent review. And upon seeing the surprise and anger of his teacher, Napoleon began "splitting his sides laughing". But the teacher’s supposed anger soon softened: “I kept this letter safe: the happiness, the style and the circumstances make it more precious than any diploma which the Emperor could have given at the time of his power.”

Las Cases last mentions Napoleon’s English on April 15, 1816, when he had been studying the language for three months. His confidence had now improved to the point where over dinner he felt comfortable giving an impromptu summary, in English, of a story he had read in an illicitly obtained French newspaper, “full of curious, remarkable, romantic details, which greatly aroused our interest.” Napoleon so enjoyed the reaction of his audience that he began to laugh, “for his story had been but that, improvised so as to show us his progress in English, so he said.”

If you’d like to know more about Napoleon’s English lessons, Peter Hicks has written an excellent piece for Napoleon.org, which our account above draws on. For more on the emperor’s final exile, have a read of the last chapter of Andrew Roberts’ Napoleon the Great (2014). Or have a look at our Collections piece on Napoleon at St Helena (1855), a book derived from several firsthand accounts, including the one by Las Cases.