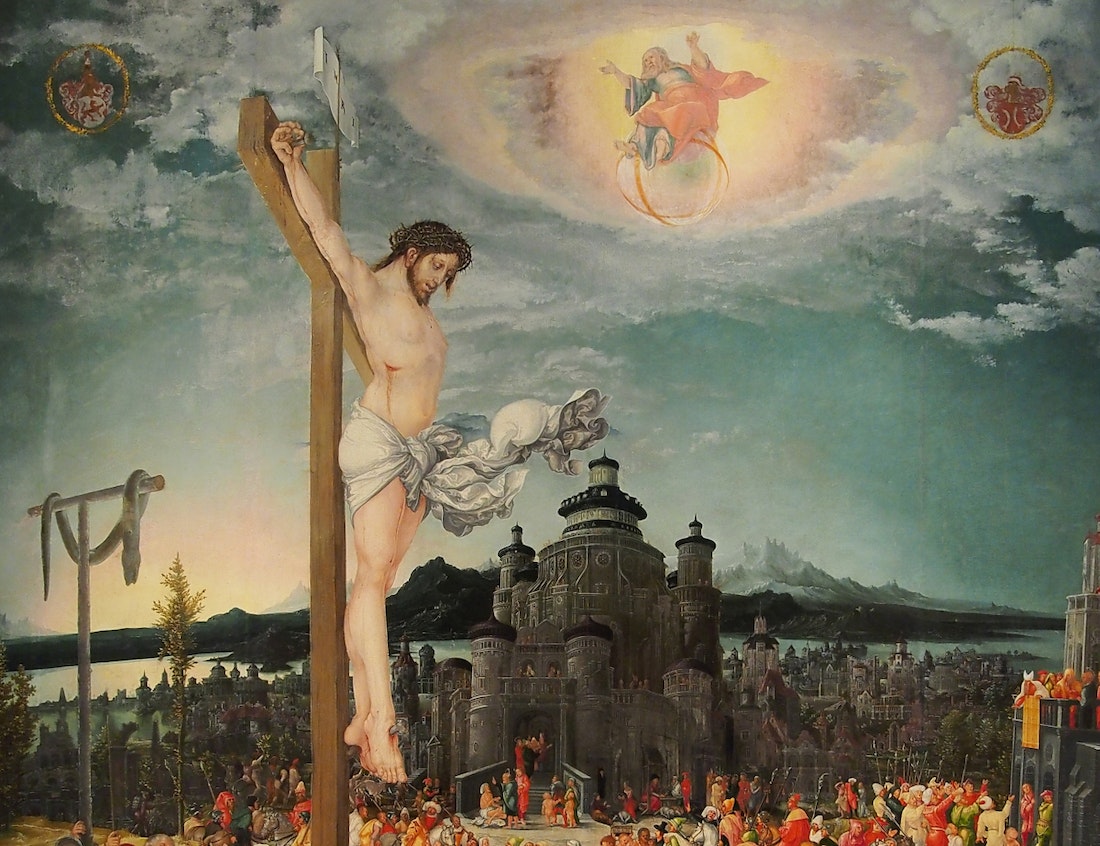 Ostentatio genitalium (the display of the genitals) refers to disparate traditions in Renaissance visual culture of attributing formal, thematic, and theological significance to the penis of Jesus. That these images seem to have been created in good faith, with pious intentions, mystifies art historians, and many refuse to recognize the category as noteworthy or distinct from the nudity of angels and putti. Yet, as examples accrue, the conspicuous attention lent to Christ’s phallus cannot escape even the most disinterested gaze. “It is no exaggeration to say that this has probably been the most taboo topic in Christian thought for two thousand years”, writes Stephen Sapp. In contrast to classical sculptural conventions, which — with exceptions like certain herma and statues of satyrs — often showcase male genitalia in a state of flaccid modesty (akin to Michelangelo’s Risen Christ), these Renaissance images shock us because they are so frequently ithyphallic: Christ has risen, but not in the way we have come to expect.

Beginning around 1260 and enjoying widespread employment before finally tapering off in the seventeenth-century, ostentatio genitalium reversed a Byzantine tendency to depict Christ as sexless, his missing organs covered by flat, diaphanous veils. This was a symbol of purity and perfection, following from Augustinian notions that untimely erections are reminders of Adam’s “sin of disobedience”. Yet in the ostentatio genitalium tradition the opposite seems true: it is the visual virility of Christ that affirms his divinity. The natural question to ask, after blinking our eyes, would be why? How do practitioners of a religion, whose seven heavenly virtues include prudence and temperance, decide to venerate, for centuries, an apparently prurient vision of their savior?

There are many theories for the question of origins. Some point to the growing influence of Franciscan devotion in the thirteenth century, which came with the slogan nudus nudum Christum sequi (“naked to follow the naked Christ”). Others place less emphasis on the reproductive organs and rather see this representation as part of the Renaissance trend toward anatomical naturalism. (This trend was occasionally taken to extremes, in art and in life: Pietro Aretino — the influential sixteenth-century Italian author charged his contemporaries to “consecrate special vigils and feast-days in its [the penis’] honour, and not enclose it in a scrap of cloth or silk”.) And it is tempting, in a period of European history where Greco-Roman civilization was “rediscovered”, to try and connect the representation of holy turgidity with pagan precursors: the Garden of Priapus, bacchanalian rites, Pan and his pastimes.

Leo Steinberg, who coined “ostentatio genitalium” in his famously controversial study of the phenomenon (1983), thinks this last temptation is a misstep. Questions about the sexuality of Christ were not imported from the past, but emerged organically out of mystical queries concerning the Incarnation: when God emptied himself of divinity and assumed a mortal form. “Delivered from sin and shame”, writes Steinberg, “Christ’s sexual member bespeaks that aboriginal innocence which in Adam was lost.” Or rather, Christ’s perfection is capable of redeeming imagery more-often associated with temptation and vice than religious piety.

Even more surprising than the content of these paintings is the fact that this theological symbolism was accessible to numerous engravers, painters, and audiences. It’s a surprise that speaks, perhaps, to a kind of oblivion: the modern world’s “massive historic retreat from the mythical grounds of Christianity”, a context in which these images were once legible. For Steinberg, the ostentatio genitalium tradition trades on a “erection-resurrection equation”, which allowed a viewer to access the holy mystery of “mortified-vivified flesh”. We find a prominent example of this “equation” in several works by Dutch painter Maerten van Heemskerck with the title Man of Sorrows, which show a resurrected, stigmata-ridden Christ, whose loincloth reveals far more than it conceals. In images where fabric successfully clothes the Son of God, the proliferation of flowing material can become a charged substitute, such as in Wolf Huber’s Allegory of Salvation (ca. 1543), where a limp serpent hangs lifeless on a distant cross, while Christ’s perizoma plumes.

The “discovery” of ostentatio genitalium has been admired and criticized by numerous scholars. One shortcoming in arguments seeking to prove the coherence of this genre arises from a lack of evidence: many artworks that might support the theory have been bowdlerized, with Christ’s body covered or modified in acts of iconoclasm and reformation. And while the images collected below all seem, with varying demands on the imagination, to highlight Jesus’ genitals, we will never be sure why. Caroline Walker Bynum, one of Steinberg’s most prolific interlocutors, cautions that acts and artworks which, for the twenty-first century viewer, seem singularly sexual, once had expanded, theological connotations. Consider, for instance, the late medieval tendency to depict Christ birthing [8] an allegorical figure of the church from a stigma between his ribs, as if the wound — created by his penetration by the Lance of Longinus — were connected to a womb. Or, as Bynum recounts, when Catherine of Siena had a vision of Christ using his foreskin as a wedding ring, “she associated that piece of bleeding flesh with the eucharistic host and saw herself appropriating the pain of Christ.” The communion with Christ’s body — an act erotic, Eucharistic, both, or more — offers a visual vocabulary that remains irreducible to any easy explanation.

Lucas Cranach the Elder, *The Lamentation of Christ, ca. 1503 – Source