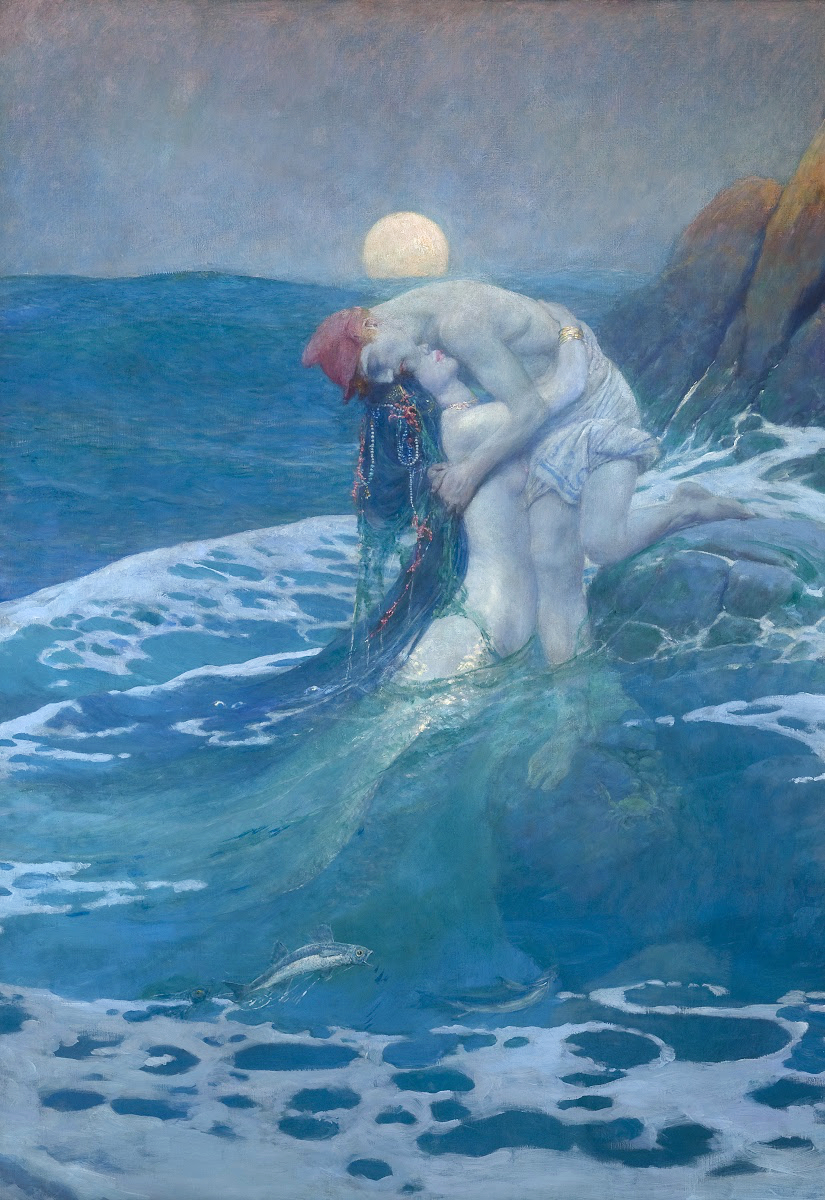 There is something profoundly haunting about a master artist’s last painting left unfinished upon its easel, especially when that work has had such a powerful hold on the modern world’s imagination. Writing about Howard Pyle’s (1853–1911) The Mermaid in The Outlook less than a year after the artist’s death in Italy, a “Spectator” described the unfinished and unsigned painting “brought back from Florence”:

heaving sea of iridescent blue and green, a cold moon, and slippery rocks, from which a mermaid siren, glittering, mysterious, alluring, winding her white arms about the young fisher-lad, was dragging him down, down, into the depths below of white lacing foam.

But the painting did not travel with Pyle to Florence: it never left the artist’s atelier in Wilmington, Delaware. (His student Ethel Pennewill Brown, who had rented the studio during Pyle’s European sojourn, captured the painting’s unfinished state in 1912.) Pyle had begun The Mermaid in 1908, using a model from the Pennsylvania Academy of Fine Arts as his inspiration for the mermaid. The young man’s aquiline nose, delicate lips, and fine feminine eyebrow are features that can be seen in dozens of Pyle heroes — prominent among them Sir Galahad, Robin Hood, and the buccaneer Captain Henry Morgan (Douglas Fairbanks’ inspiration for The Black Pirate, and later Johnny Depp’s Jack Sparrow).

Considered the “father of American illustration”, Howard Pyle’s capacious imagination compassed both American and European historical subjects. Born but a few blocks from the wharves and quays of the Wilmington riverfront, summering most of his life at Rehoboth Beach near the surf-battered Cape Henlopen, Pyle’s oeuvre leaned ever seaward, and so mermaids had long lived alongside his pirates, sailors, and sea captains. A decade before The Mermaid, Pyle had caught Man and Maid in a similarly Moon-kissed embrace in The Merman, whose hybrid, piscine nature is half obscured, registered only by the fingers of his right hand, which appear faintly scaled and webbed. Among Pyle’s illustrations for Oliver Wendell Holmes’ Autocrat of the Breakfast Table (1894), we find an image of a half-dozen mermaids swimming alongside a mythic goddess-carrying ship and another of a mermaid playing the lyre. And Pyle’s lively 1902 collection “North Folk Legends of the Sea”, for Harper’s Monthly Magazine, included an eerie frontispiece of bare-breasted mermaids, and a portrait of St. Brendan wearing a brocaded cape adorned with undines. 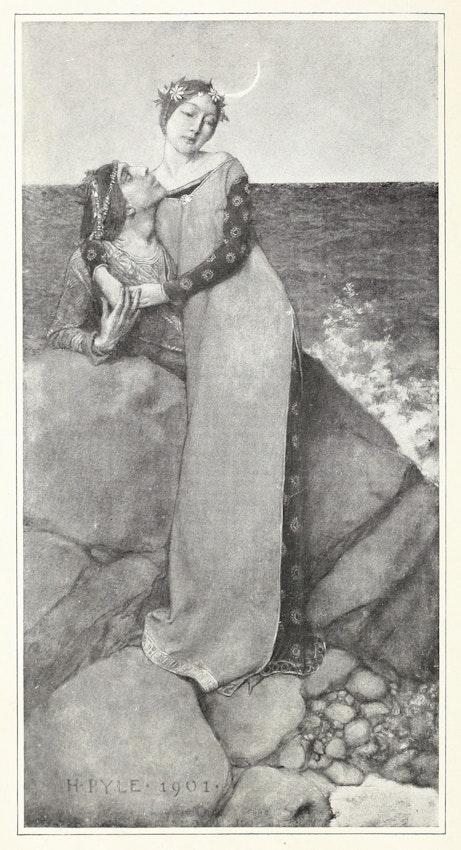 When Pyle set off for Italy with his family in November 1910, he had just finished a trio of immense murals on Dutch colonial era subjects for the Hudson County Courthouse in Jersey City, and was keen to garner more commissions. Having crisscrossed the Atlantic for decades in his imagination, this was his first actual trans-Atlantic voyage. Ill almost from the moment he arrived in Rome, Pyle persevered in his study of Florence's mural masterpieces, but died a year later of a lingering kidney infection before completing a full work. Orphaned on his Delaware easel, The Mermaid was finished by Pyle’s student Frank Schoonover, who added a pair of flying fish (almost exactly reproduced from Pyle’s headpiece for “North Folk Legends of the Sea”) and a scuttling crab.

Along with The Mermaid and over a thousand other works by Howard Pyle, the Delaware Art Museum owns nine of his pencil sketches for the painting. Every single sketch — most as furiously dynamic as the sea foam enveloping the two Moon Lovers — is of the cross-species embrace, a long longing that has haunted the human imagination for millennia, and haunts us still. A century ago, the Outlook’s Spectator mistook that embrace as the Mermaid’s murderous design on a young fisherman. A reading more consonant with the painter’s soul might note the deep atmosphere of reciprocity shimmering between the lovers. Amid the relentless movement of the restless sea, they find fulfillment in fusion. Yet the fisherman’s pileus or Phrygian cap, the soft, conical hat of emancipated Roman slaves, is also the classic red liberty cap that became an icon of the French and American revolutions, suggesting that this mercurial subject’s freedom is not solely otherwordly. Pyle’s mermaid — palpably more human than fish, for her alabaster skin runs down below the water line, and there is only the barest hint of a forked, scaled tail — is made alongside man, neither for or against him. If only for a moment, their loving embrace stills all stormy waters, and heals all wounds.