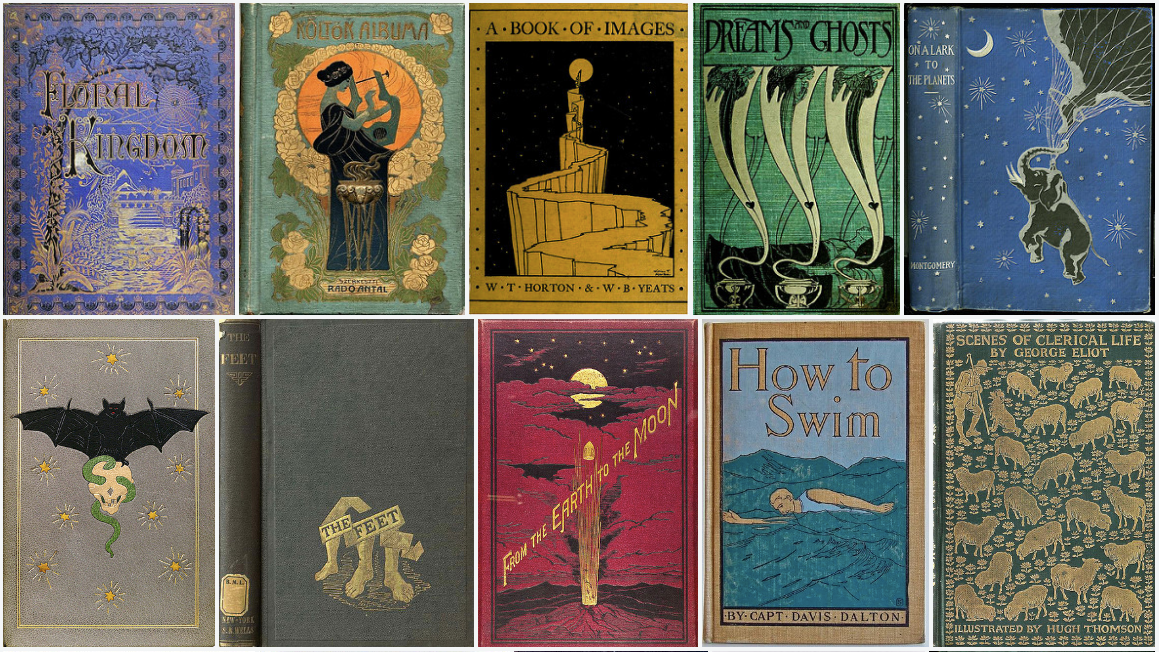 No one has nominated us yet for the book cover challenge so we thought we'd take matters into our own hands and publish some of our favourites from the first hundred years of the book cover (as we commonly understand it today) — though we've not the restraint for seven spread over seven days, so here's a massive splurge of thirty-two in one.

Inspired by rising literacy rates and advancing technologies, the nineteenth century saw the book transform from a largely hand-made object to a mass-produced product. In this new environment the book cover took on added importance: it was no longer merely a functional protection for the pages but instead became a key platform through which to communicate and sell the book. Prior to this covers had — bar a smattering of highly bespoke one-off creations (e.g. embroidered covers for personal libraries) — mostly been plain leather bound affairs. From the 1820s, with the rise of mechanical bookbinding, these leather covers of old gave way to new cloth coverings which, in addition to being inexpensive, were now also printable. A wide variety of cover printing techniques were employed over the decades: from embossing to gilt to multi-colour lithography. A totally new artistic space was opened up. As you can see in our highlights below it was one in which illustrators and designers flourished, producing a range of covers as eclectic in aesthetic approach as the myriad contents they fronted.

Frances Trego Montgomery. On a Lark to the Planets. Akron: The Saalfield Publishing Co., 1904 — Source.

Jules Verne. From the Earth to the Moon. London, Sampson Low, Marston, Low, and Searle, 1873 — Source.

The Yellow Book. Volume III. October, 1894. London: John Lane. — Source. One of the many covers for the journal executed by Aubrey Beardsley