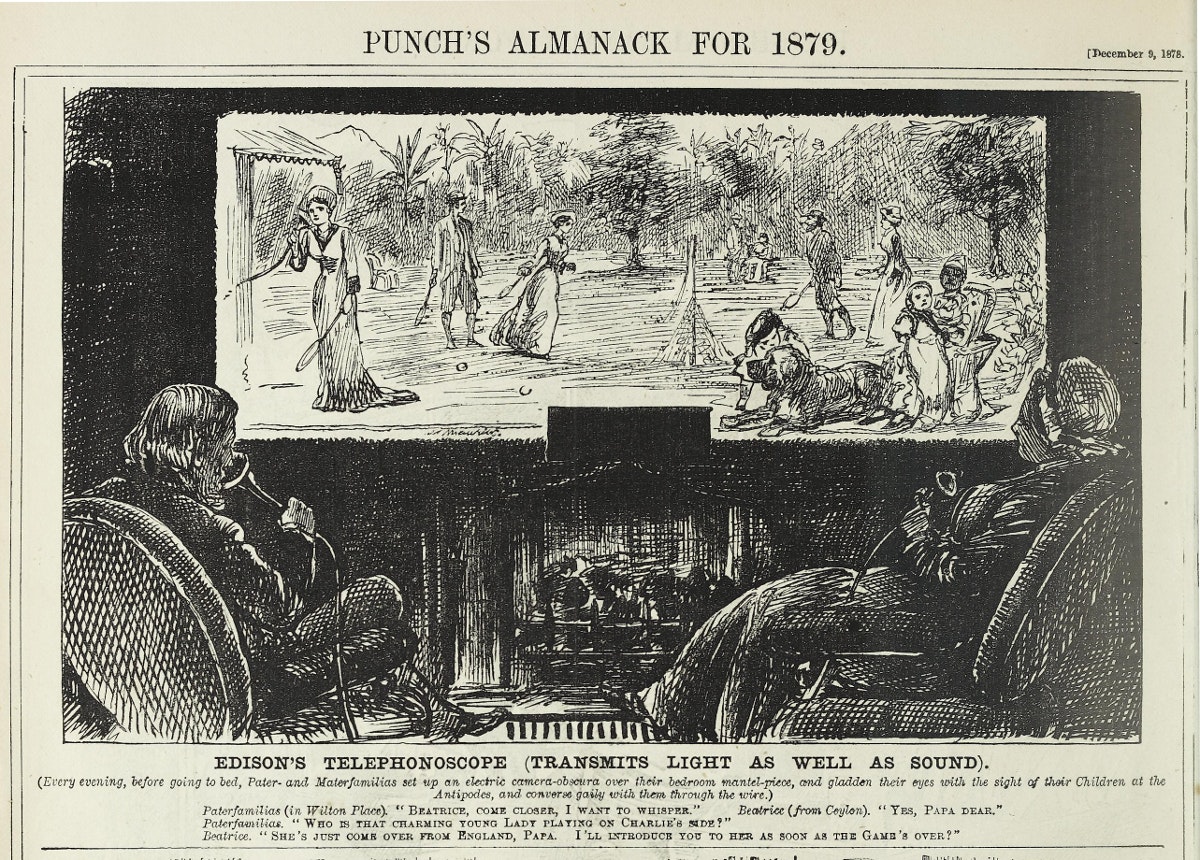 The cartoon above is from the pen of George du Maurier, printed in the Punch Almanack for 1879. Although titled "Edison's Telephonoscope" it is not, in fact, a creation of Thomas Edison's at all (either realised or proposed) but rather an imagining by Maurier of what the great inventor might come up with next: a machine which, for all intents and purposes, amounts to some kind of Victorian Skype. A mother and father — the "Pater- and Materfamilias" — sit at home and converse with, while also viewing, their children at play across the other side of the world. The caption reads:

(Every evening, before going to bed, Pater and Materfamilias set up an electric camera obscura over their bedroom mantel-piece, and gladden their eyes with the sight of their Children at the Antipodes, and converse gaily with them through the wire.)

Paterfamilias (in Willow Place): “Beatrice, come closer, I want to whisper.”
Beatrice (from Ceylon): “Yes, Papa dear.”
Paterfamilias: Who is that charming young lady playing on Charlie’s side!
Beatrix: “She’s just come over from England, Papa. I’ll introduce you as soon as the game’s over!” (n.p.)

It is a playful, but remarkably accurate, prediction of things to come. Although, the great Albert Robida had ten years earlier published an illustration depicting a man watching a "televised" performance of Faust from the comfort of his own home (see image below), this Maurier image seems to be the first to imagine a two-way communication, combining the remote viewing with the ability to converse. Although it seems to be the first published image, the idea as predates 1879 in the form of the "telectroscope". As Verity Hunt explains:

the concept of the device first appeared not long after the telephone was patented in 1876. Following speculative descriptions of a tele-visual device in publications including The New York Sun (1877) and Nature (1878), the term ‘telectroscope’ was used by the French scientist and publisher Louis Figuier in L'Année Scientifique et Industrielle in 1878 to popularise the invention, which he incorrectly interpreted as real and ascribed to Alexander Graham Bell. It was hoped it would ‘do for the eye what the telephone had done for the ear’ and provide a technologised system of long distance seeing.

More images followed Maurier's, including one from a set of trading cards entitled "In the Year 2000" (En L'an 2000) which were sold as souvenirs at the 1900 Paris Exposition (see image below). The particular card in question - entitled "Correspondance Cinema-Phono-Telegraphique" - shows an invention very similar to that pictured in Maurier's. Interestingly, at the same Paris show, a Russian scientist named Constantin Perskyi read a paper to the International Electrcity Congress in which he described a device called "Television", the first time the word had ever been used.

Victorian Trade Card believed to be the first colour lithograph to show the concept of television - Source.

Another trading card showing the device. The caption reads: "How our great grandchildren will live in the year 2012. Hello my child. We send you your Chocolate Lombard by the aircraft to India." - Source.