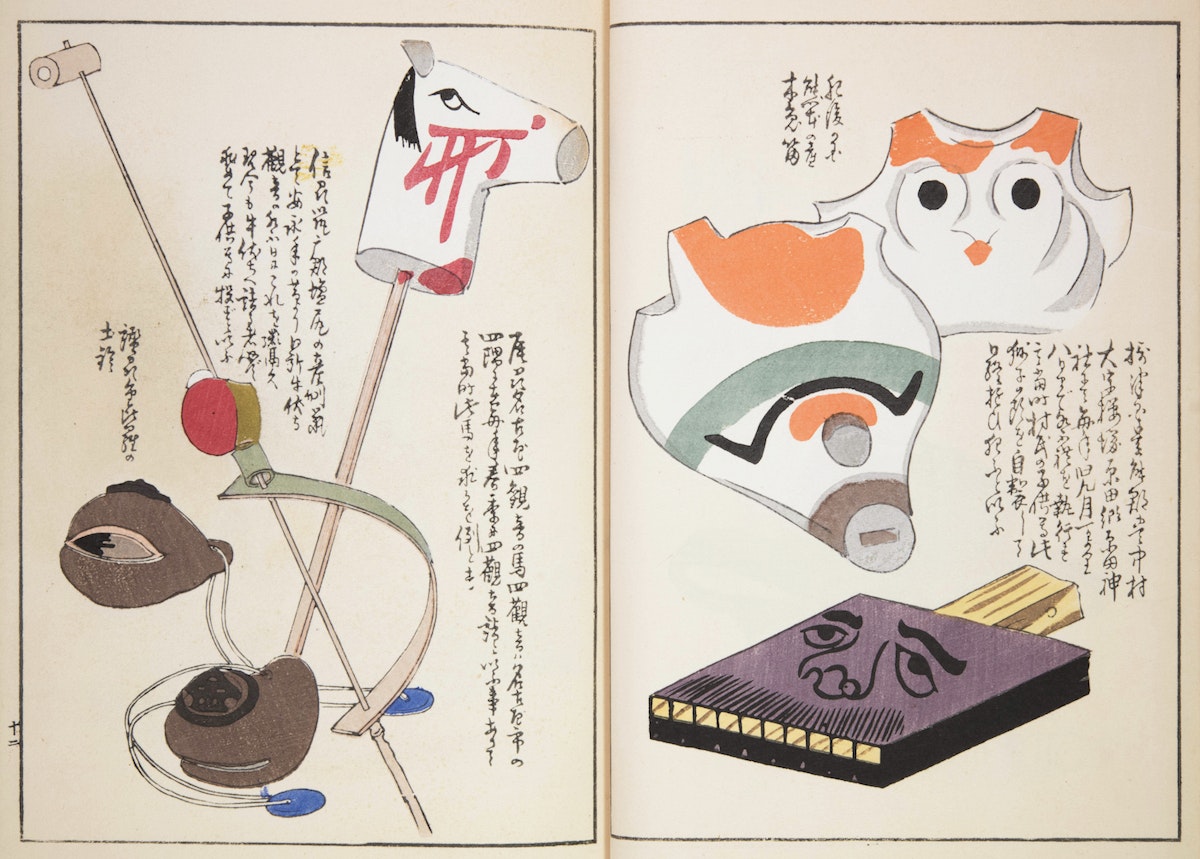 Hobbyhorse and other toys from the fourth volume of Unai no tomo.

When Brooklyn Museum Curator of Ethnology Stewart Culin visited Japan for the first time in the fall of 1909, he escaped from the harangues of curio dealers by asking them to bring him a traditional children’s toy called burri-burri. Culin knew this rare and obscure object only from a specimen in Tokyo’s Imperial Museum and another owned by the collector Seifu Shimizu. Culin’s request to the dealers quickly confirmed the toy’s rarity, as neither he nor any of his numerous assistants were ever offered one. In the end, Culin asked Shimizu to make him a copy to bring back to Brooklyn.

Only on a subsequent trip to Japan in 1912 did Culin secure an original, from an old shop on Kyoto’s famed Shijo Street. It bore the dim painted traces of pines and storks beneath its patinaed surface, complete with a plaited cord of knotted and tasseled red silk, and was accompanied by a pair of small wooden disks. The only lore that the shop owner could provide Culin was that the burri-burri had been used in an ancient game. The designs seemed to resemble the emblem associated with the Boys Festival, and also with traditional New Year’s toys — battledores and shuttlecocks.

During Culin’s visits to Japan, Seifu Shimizu — director of a major Tokyo trading company, artist, calligrapher, and leading Meiji Era collector of omocha (toys) — was in the midst of publishing the ten-volume Unai no tomo, comprised of charming woodblock prints of traditional objects of play. The founder of Odomokai (十八番クラブ), a Connoisseur's Club to advance the appreciation of tomo (“playfellows” or “companions”), Shimizu treasured Japanese toys. He created the Takeuma-kai (Hobbyhorse Club) for their study in 1880, and curated the first known exhibition in 1906. After Shimizu’s death in 1913, his friend Nishizawa Tekiho completed the final volumes of the Unai no tomo series. Browsing through these catalogs we meet: jack-in-the-box chickens; whales on wheels and magnetic mice; a clay sumo wrestler grappling an orange carp; and popguns, hobbyhorses, and noisemakers galore.

Only the barest of labels accompany each of Seifu Shimizu’s prints and were it not for Culin’s connoisseurship, these ubiquitous folk objects may have remained in obscurity for the English-speaking world. Student, friend, and colleague of the pioneering anthropologists of play Frank Hamilton Cushing and Frank Gouldsmith Speck, Culin was the world’s paramount encyclopedist, philosopher, and collector of children’s games and toys, having published Korean Games in 1895 and the eight-hundred page Games of the North American Indians in 1907. Widening his discoveries about burri-burri, he noticed that the Unai no tomo were almost without exception derived from amulets and talismans rooted in Shinto and traditional Japanese folklore. As miyage — souvenirs — they were commonly given as presents to children by travelers returning from both sacred and secular pilgrimages. “They are frequently, in fact”, Culin concluded, “degenerate forms of charms and magical things, and the line between the two classes of objects cannot be sharply defined”.

By the time that Culin penned these words, he felt a deep, bittersweet attachment to both the Unai no tomo volumes and the toys that he brought home to deposit in the Brooklyn Museum, for modernity was sweeping from the American as well as the Japanese child’s landscape all manner of games and toys. Regaling a Brooklyn Daily Eagle reporter in 1925 with descriptions of a half-dozen varieties of tag, “hares and hounds”, “ring relieve”, “red lion”, “head and footer”, “Spanish fly”, “kick the wicket”, “one o’cat”, and “fungo”, Culin grew wistful, observing that “the street games of Brooklyn grow fewer and fewer. The great amount of traffic has driven the children from the streets that used to be their playgrounds. The old-time street games like the burri-burri are becoming a thing of the past.”

Hago (shuttlecock, left) and Hago-ita (battledores, right). The Hago was typically made of the seed of the Mokuran (soapberry tree) into which several small feathers were fastened. Traditionally crafted from Kiri wood, modern versions of the Hago-ita were fashioned from Sugi (Japanese cedar) in the Meiji Era and often decorated with the faces of famous actors. (Volume 1, pg. 31)

Miharu goma (colt of Miharu), from Oshu, North Japan. Shimizu told Culin that it was also called kosodate uma, or “child-raising horse”, suggesting it may have been a charm for protecting children. (Volume 1, pg. 37)

Left: A toy owl sold at the shrine of Kishimojin in Tokyo. The fox, dressed as an actor, is a kind of jumping jack. Right: various noisemakers — clamshell rattles, seed “bells”, and a popgun type “firecracker”. (Volume 1, pg. 39)

Left: “Rouge Oxen”, featuring kuruma ushi, an ox-cart from Kyoto, top-left. Middle-left shows a black kneeling ox bearing the legend: “If a woman buys rouge on the Ox Day in winter, she will take out such an ox and name it bene ushi, or rouge ox.” Made of clay, this ox was given in return for a prayer granted at the Ushi-no-miya or Ox Shrine at Tennoji, Osaka. Bottom-left: ox with pack saddle from the city of Tsu, Ise. The Ox is always associated with Tenjin, the God of Letters. (Volume 3, pg. 8)

Masks. Left: Okamé, a legendary Japanese dragon and Shinto deity of ice, rain, snow, and winter; right: red-faced demon. These masks were sold on the 16th of the Tenth Month at the Ushi matsuri (Ox festival) at the Kworyuji temple at Udzumassa near Kyoto. (Volume 3, pg. 10)

Left: Hago-iti (battledores). Right: Zubombo, a paper dancing lion. With clam shells attached to his feet to anchor him, this paper lion can be made to dance by the movement of a fan. (Volume 3, pg. 20)

Wheeled fish in foreground, right, with sliding toy tai fish strung on a cord, with bow, behind. (Volume 3, pg. 20)

Toy tigers are popular during the Boy’s Festival because of their association with a famous military hero who vanquished a tiger in Korea. (Volume 3, pg. 23)

Left: Kazaguruma (windmills), paper pinwheels pinned with a bamboo splint. Right: Miharu goma, or Colt of Miharu. According to Culin, horses were so common as ex-votos in Japan that they are collectively called ema - “picture horse.” (Volume 3, pg. 25)

Left: Tsubame, barn swallow of carved wood, suspended from a length of green bamboo, made on the occasion of Shoryo-e, the Assembly of Sactified Ghosts, held in July of each year at Tennoji, an Osaka temple. 12 of these swallows decorate the hall; after the ceremony, people compete to take them home as charms to avert thunder. Right: noisemakers. (Volume 4, pg. 12)

Left: Haru goma (hobbyhorse). A toy copy of the Spring Horse used in the streets by entertainers on New Year’s Day. (Volume 4, pg. 16)

Left: varieties of dolls. Right: Suichukwa (water-flowers), made of pith, which unfold like tea-leaves when put in water. (Volume 4, pg. 19)