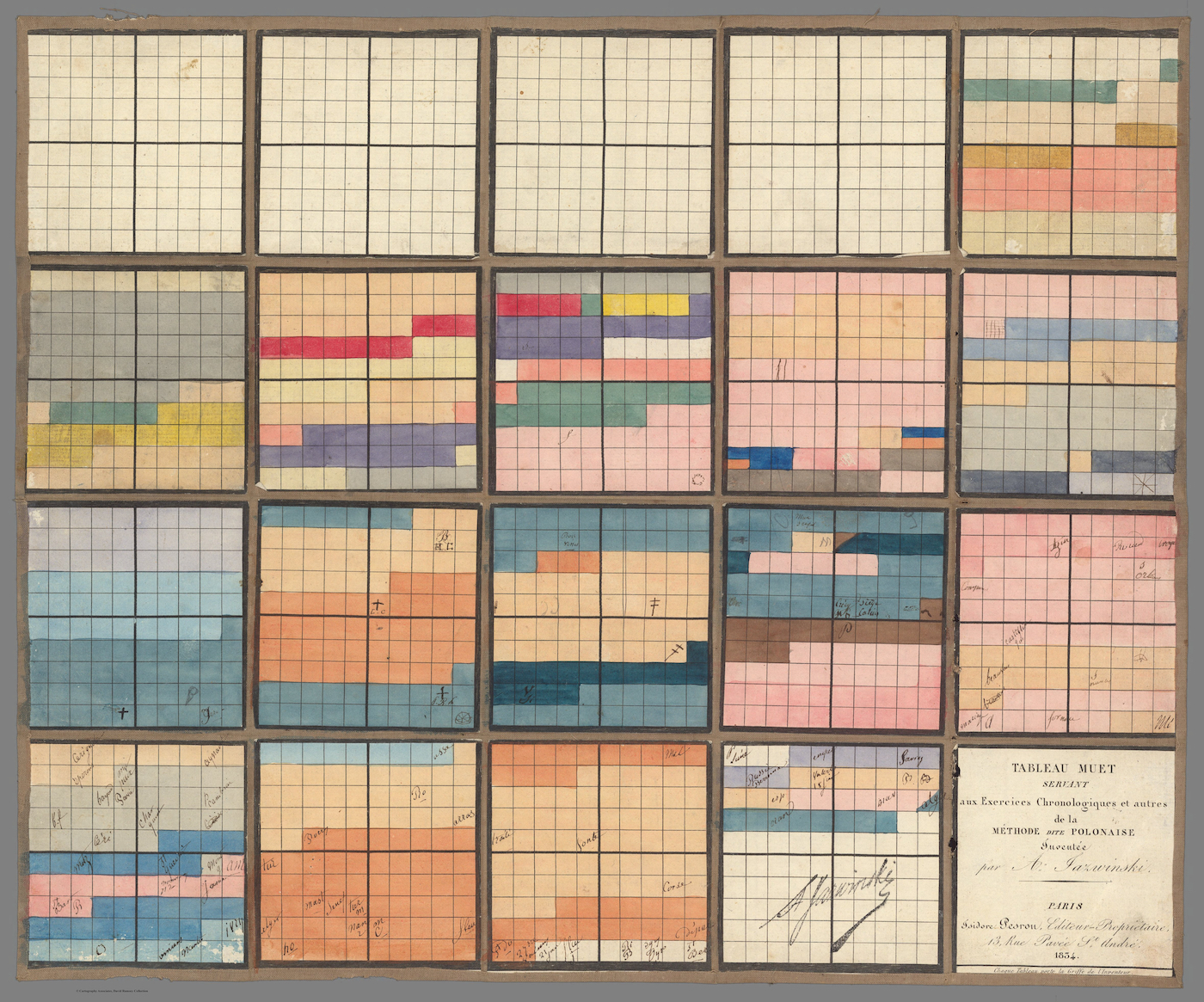 Antoni Jażwiński’s Tableau Muet, based on the original “Polish System” for charting historical information, later revised in France and the United States, 1834 — Source.

How does one visualize history and chart time? Is it a line, moving forever outward in one direction? A Grecian temple, as Emma Willard envisioned, with Ionic columns representing centuries, receding from view toward a vanishing point at the world’s origin? Or could it be a corkscrew ascending upward, allowing us to look down from our present position into past events similar to our own?

For the Polish educator Antoni Jażwiński, history was best represented by an abstract grid — or at least it was for the purposes of remembering it. The so-called “Polish System” originated in the 1820s and was later brought to public attention in the 1830s and 1840s by General Józef Bem, a military engineer with a penchant for mnemonics. As Anthony Grafton and Daniel Rosenberg catalogue in their Cartographies of Time, the nineteenth century brimmed with new methods and technologies for committing historical information to memory — and Jażwiński’s contribution (and its later adaptations) proved one of the most popular.

The Polish System — which almost anticipates Piet Mondrian’s abstract checkerboards and the wider modernist fascination with grid figures — coupled chronology to the map-making traditions of geography. In Jażwiński’s original chart, each main 10x10 box is a century and the rows separate decades. Within a century box, each individual square is a year, each color a nation (with shading for different monarchs or governments), and symbols can stand for marriages, wars, treaties, and other types of events. Should one become proficient with this system, they can peer down on the history of the world, summarized on a surface not much larger than a chessboard. 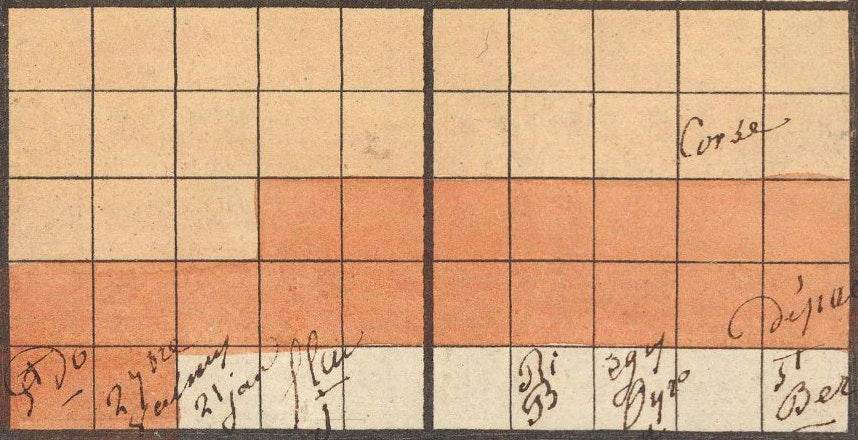 In this detail from the above table (showing the years 1751 to 1800), “Corse” appears in the square representing 1769, denoting the French conquest of Corsica; “21 jan” is written over the 1793 square, denoting the execution of Louis XVI (whose reign is shown in the deeper shade of orange) — Source.

In addition to the colored grid, Jażwiński also explored other ways of making events easy to remember within the gridded matrix. One of the most striking of these was the idea of “chronological constellations”, laid out in part two of his Méthode polonaise (1835). Here historical events marked in the grid would become guiding points within a larger shape, as stars function in a heavenly constellation — “sometimes it's a chair, a sickle, a boat, a letter of the alphabet, etc.” 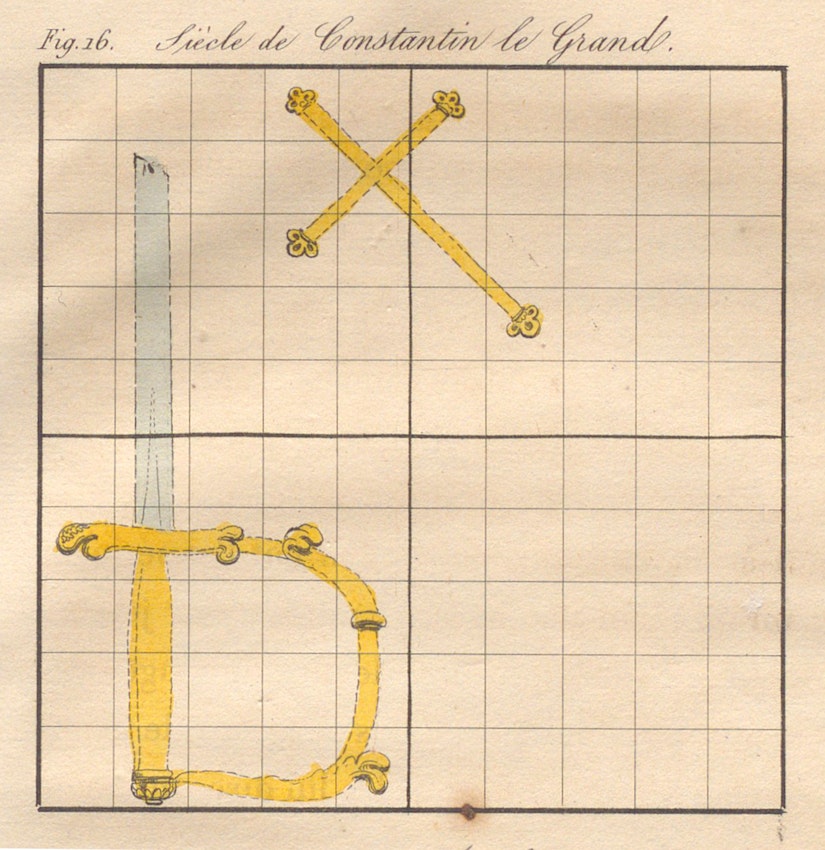 Illustration of a “chronological constellation” from "the century of Constantine the Great", from Antoni Jażwiński's Méthode polonaise (1835) — Source.

From Poland, Jażwiński’s system moved westward. In the 1830s, for instance, it became an official pedagogical tool for teaching history across France. By the 1850s, a revised and improved version preoccupied educators in the United States and Canada. Here the chart was imagined to be a technology of almost limitless potential. As Nelson Loverin wrote, in his grandly-titled Loverin’s Chart of Time (1882), the Polish System’s “centograph” allowed the student to “[c]ultivate the memory by using the eyes, and their nerves of induction as feeders of the grand optic centres, the reservoirs of the mind”. The North American variation was popularized due to the efforts of Elizabeth Palmer Peabody, who opened the first English-language kindergarten, and shared a Transcendentalist philosophical outlook with her brothers-in-law Horace Mann and Nathaniel Hawthorne. It seems Peabody revised the original system in 1850 with the publication of her The Polish-American System of Chronology. To increase granularity, her chart further divides up the (previously) smallest unit into a 3x3 grid, which offered the opportunity to indicate the nature of the remembered historical event — spatializing the births and deaths of people, nations, and technologies. 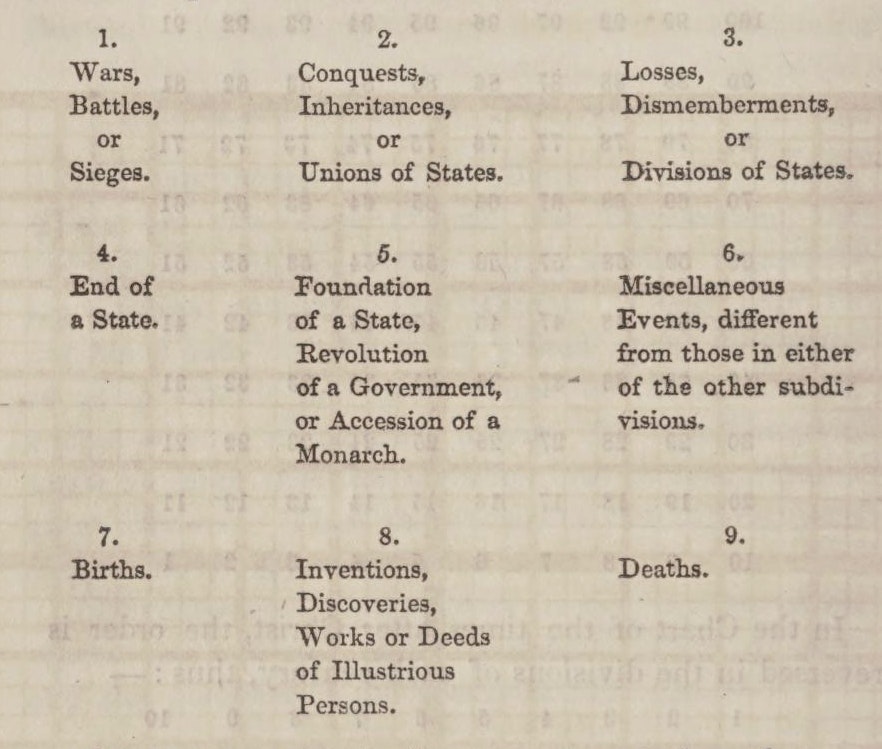 A detail from The Polish-American System of Chronology (1850), demonstrating how the 3x3 grid can be used to categorise events — Source. 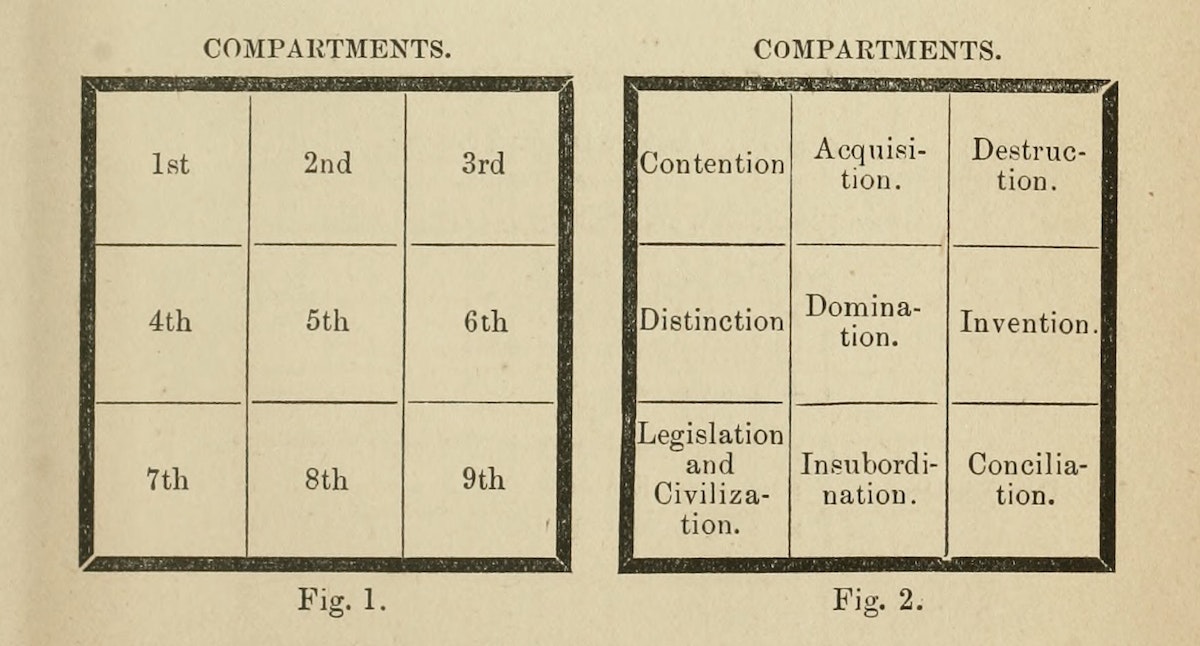 For Peabody, temporal grids were more than geometric memory palaces; they had the potential to “lay the foundations of historical knowledge in the minds of the young”. In the age of digital databases, where historical dates are offered up by search engines with a quick tap of the thumb, this might seem like a quaint and antiquated ambition. But the stakes of forgetting are palpable in Peabody’s text. Chronological knowledge is a gateway to democratic power, she believed, recalling “the time, within the memory of our living parents, when the boundaries of nations, and their relations in space to each other, were known only to the few cultivated persons who had sufficient activity of imagination to picture them out by means of descriptions in words”. The Polish System fixed this: no longer did a student have to create a picture of the world out of words — now global history could unfurl on a grid before their eager eyes. 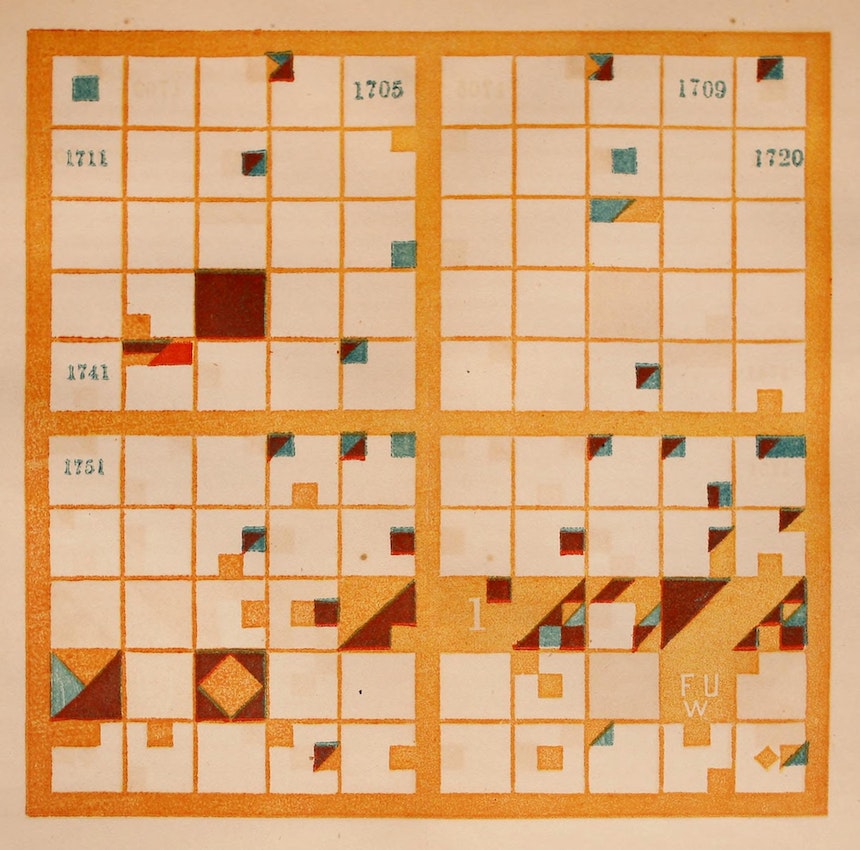 A visualization of the 18th century, one of four large-scale fabric floor charts made by Elizabeth Peabody and reproduced in her Chronological History of the United States (1856). “I” in 1776 represents “Independence Declared”. “F U” and “W” represent the establishment of the Federal Union and the beginning of George Washington’s presidency in 1789 — Source. 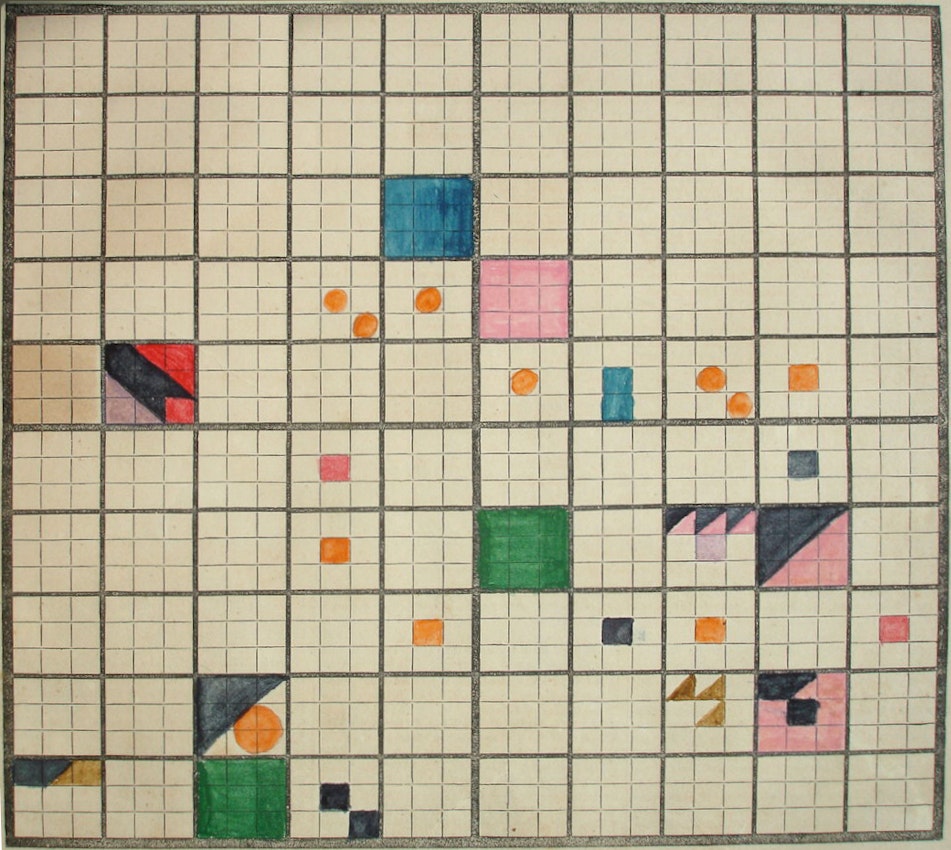 A filled in chart from Elizabeth Peabody’s Universal History (1859) — Source.