The Discarnates: Thomas Carlyle in the Spirit-World (1920)

Dr. WM. J. Bryan, What Spiritualism Really Is, By Thomas Carlyle In the Spirit-World, And Through the Impressional Brain of Dr. WM. J. Bryan (New York: Alberta Publishing Company, 1920).

In 1869, the Scottish philosopher Thomas Carlyle horrified legions of spiritualists with a letter, printed in the American Scotsman, that described the new religious movement as a “Liturgy of Dead Sea Apes”. Carlyle enlisted a favorite insult: a fable held that when a wayward tribe, who lived by the Dead Sea, refused to listen to the wisdom of Moses, they were transformed into apes, “gibbering and chattering very genuine nonsense”, as Carlyle narrated in Past and Present (1843). “They sit, with… such an air of supreme tragicality as Apes may; looking out through those blinking smoke-bleared eyes of theirs, into the wonderfulest universal smoky Twilight and undecipherable disordered Dusk of Things”. For Carlyle, the notion that people could converse with the dead, encountering vaporlike spirits as they sat in the darkness, was the latest instance of ape-consciousness, the “truest, tragicalest Humbug conceivable by the mind of man”.

One will never know what happens after death, Carlyle contended. “Give up all that”, he advised in his letter. In response, a spiritualist in Bristol took it upon himself to write to the esteemed Sage of Chelsea, to politely ask whether he had ever investigated the phenomenon of Spiritualism himself. He received a curt, one-sentence reply, in blue colored pencil: By volitn., or except passively and by accidt., I never did; nor have the least intentn. of ever doing.

By 1919, Carlyle had changed his mind. His body had lain in its grave for nearly four decades when his spirit appeared to a certain Dr. Wm. J. Bryan, with the urgent need to author another text. Over the course of a year, the philosopher transmitted the chapters of What Spiritualism Really Is, By Thomas Carlyle In the Spirit-World, And Through the Impressional Brain of Dr. WM. J. Bryan, at a moment when a teeming ocean of dead, killed in the Great War or by flu, were beckoning new generations of spiritualists worldwide. “The change which comes to all who pass the portal of death, is simply…. a walking across the threshold of two rooms”, Carlyle, “a so-called dead man”, excitedly announced. It was the duty of the living, he reported, to receive the truths of Spiritualism in midnight communiqués “by wireless”. Dr. Bryan, who worked a day job as a physician, found his pen gliding across the page at night through automatic writing, the same process, he noted, as that which inscribed the ten commandments on tablets of stone. 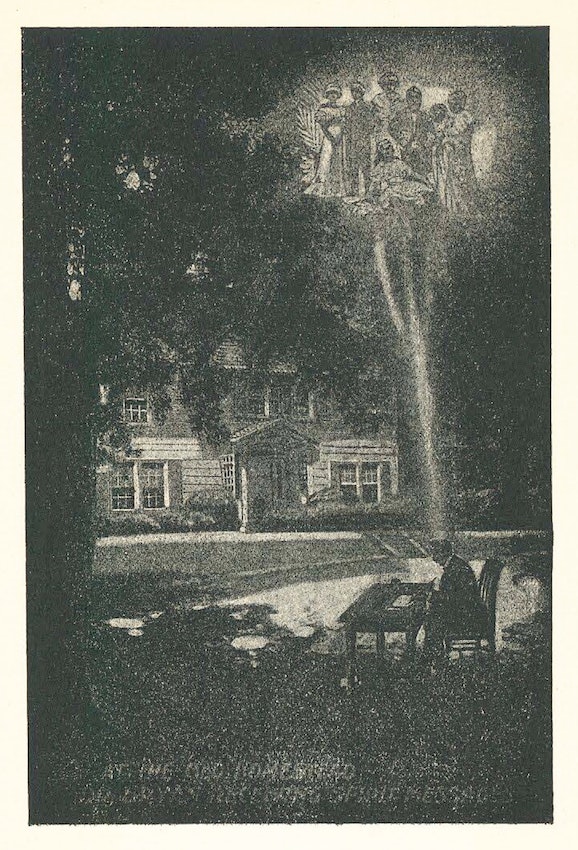 “A circle of spirit forces in the shape of a horse-shoe, is seen to surround me while writing this, emblematic of ‘good luck’ to those who form a determination to advance in the knowledge and truth of the Divine Science called ‘Spiritualism.’”

In What Spiritualism Really Is, Carlyle posthumously describes the nature of death, wherein the magnetic chord that connects the soul, or astral-body, to the physical body, is severed. Leaving behind their cadavers, all souls arrive at the same place, “Over There” — for there is no such region as hell, even for those who might deserve it. The gauzy newcomers take time to build strength again, and to adjust to the brighter colors of heaven, before they begin to speak. “Change certainly has taken place; but annihilation—never!” The dead, Carlyle relates, are the “discarnates”, those who have shed their bodies but retain their unique selves: “always it is found that personality persists”.

During his “earth career”, Carlyle had worried over how to write history that still had arterial blood. Haunted by his own unfinished biography of Oliver Cromwell, he wrote to Emerson in 1840, “A subject dead is not worth presenting.” For Carlyle, “the past was not a dead thing awaiting the resurrecting pen of the historian, but something ‘alive’”, the scholar David McAllister notes; “Carlyle’s fear was that in the act of writing he would kill it.” Although he ridiculed the rituals of the séance room, as a historian, Carlyle was already engaged in the practice of letting the deceased speak for themselves. Later, Carlyle’s spirit would appear again in a classroom in Michigan in 1936, when a professor invited a Detroit medium, Mrs. Lillian Lee, to conjure the dead for his session of History 112, “Europe in the 17th Century”.

Other souls swarm around Dr. Bryan in the book: Washington Irving, Frederick Douglass, Bryan’s own father, the biblical prophet David, an unnamed nun, “casting all sectarian thought aside”. Thomas Jefferson speaks of justice and mercy; President McKinley applauds Bryan for his efforts. The Neoplatonist martyr Hypatia arrives to say, “The doctrine is sound!!” The abolitionist Henry Ward Beecher tells of how the dead wouldn’t care to live again, even if they could. Carlyle relays: “The question which is so often asked by mortals of spirits is: ‘Are you happy?’ And the answer comes, invariably, ‘Yes’”. Yet at the heart of Carlyle’s transmitted text is a riddle. If personalities persist in the afterlife, how can it be that the spirits seem to agree on absolutely everything? The mysteries of death endure.