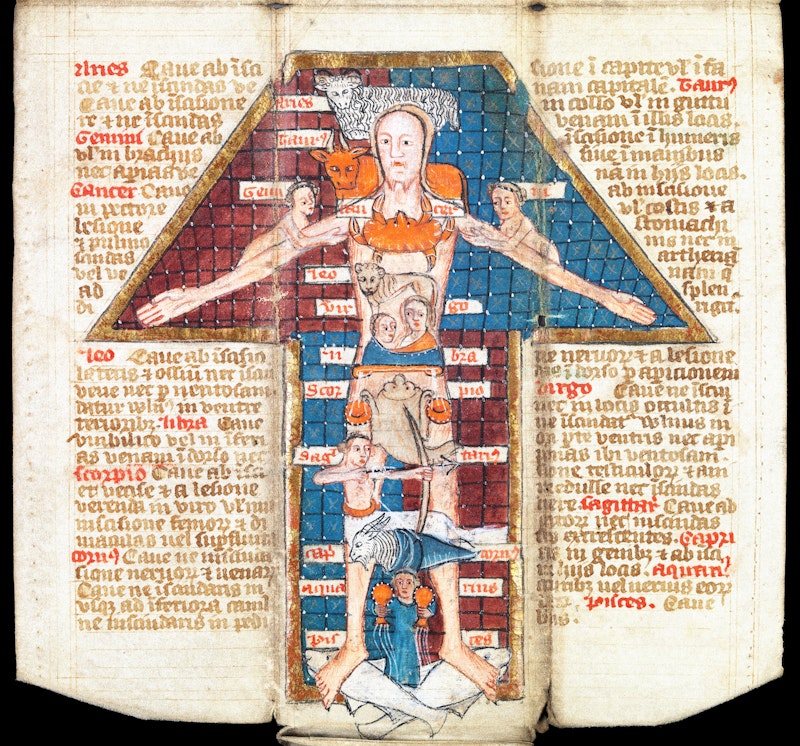 Illumination from an English folding almanac in Latin, ca. 1417 — Source

If you read the broadsheets, tabloids, or periodicals, you may have noticed a recent trend. “Why are Millennials So Into Astrology?” asked the bewildered Atlantic in 2018. The Guardian found the issue compelling enough to publish two different articles on the subject three days apart. A year later, the New Yorker featured an exposé on “millennials who see no contradiction between using astrology and believing in science”. And the New York Post wrote that “millennials are flocking to astrology”, failing to note its own horoscope section. Even the Financial Times could not help commenting on stargazing’s “strange rebirth”.

Humans often look to the stars in times of uncertainty. And the stars — in a tradition of illustrations known as Homo signorum, or, more popularly, the zodiac man — have exerted a strange pull on the human form. In this genre of images, artists feature zodiac symbols alongside or atop the parts of the body they were thought to influence — sometimes even pictured as being attached by ropes. In one version (pictured above), from a fifteenth-century English folding almanac written in Latin, we see a Christ-like figure overcome by animal and allegorical signs. He stands on the fish of Pisces, the crab of Cancer scuttles up his chest, and Gemini twins weigh down the arms. In place of a halo, the goat and bull (Capricorn and Taurus) float above his head with dopey expressions.

These images were, in most cases, didactic. Surgery had to be timed for when the stars were well-aligned, or, at least, not in opposition to the body part undergoing treatment. To alleviate headaches in seventeenth-century England, for instance, bloodletting was avoided “when the moon was in Aries, since this sign governed the head and face”, writes Katherine Foxhall. Below you will find a table of correspondences between body parts and astrological positions, courtesy of Harry Robin’s The Scientific Image: From Cave to Computer:

Unlike many ancient and early modern esoteric practices, it is difficult to delimit the zodiac man to a specific region, religion, or civilization. We find similar images in manuscripts from Persia, where the signs appear as if swimming through the zodiac man’s bloodstream, and collected in Antiquities of Mexico (1831) — the Viscount of Kingsborough Edward King’s facsimile of artefacts from the indigenous peoples of the Americas — whom he believed to be a lost tribe of Israel. In a plate from this volume, Nahuatl zodiac signs (cozcacuauhtli, the vulture, and tecpatl, flint or an obsidian knife, for instance) appear like kites strung to the zodiac man’s eye, toes, mouth, and chest. And coatl, the serpent, slithers menacingly toward his genitals.

In Europe, images of the zodiac man formed part of a larger medieval episteme or constellation of knowledge. Humans were microcosms, whose health was influenced by the motion of celestial spheres, an idea that found analogues in Babylonian, Egyptian, Chinese, Vedic, Mayan, and Aztec cosmologies. In a subgenre of zodiac man images, he is enclosed in an egg-like shell, encircled by astrological creatures. The zodiac man was a reflection of his firmament. For more on the zodiac man, you can read Lawrence Parmly Brown’s comparative history on the subject from 1921 and browse the examples below.

“The anatomy of man's body, as govern'd by the twelve constellations”, a woodcut from Poor Richard's Almanack by Benjamin Franklin, ca. 1750 — Source

A zodiac man from a Spanish manuscript — Source

The vein man or Homo venorum as illustrated by Daniel Ricco, ca. 1690 — Source

A page from Michael of Rhodes' biographical manuscript, documenting his four decades of sea voyages, ca. 1445. The image relates to bloodletting, which was practiced according to the night sky's ruling sign — Source

A Mesoamerican version of the zodiac man, reproduced in Edward King's nine-volume Antiquities of Mexico (1831-1848) — Source

Bloodletting man showing the influence of zodiac and planets — Source

“Naked man surrounded by the twelve symbols of the zodiac” — Source