For many, the arrival of Christopher Columbus in the Americas is inextricably linked to a particular image: a small group of confident men on a tropical beach formally announcing their presence to the dumbfounded Amerindians. Michiel van Groesen explores the origins of this Eurocentric iconography and ascribes its persistence to the editorial strategy of the publisher who invented the initial design, a full century after Columbus' encounter. 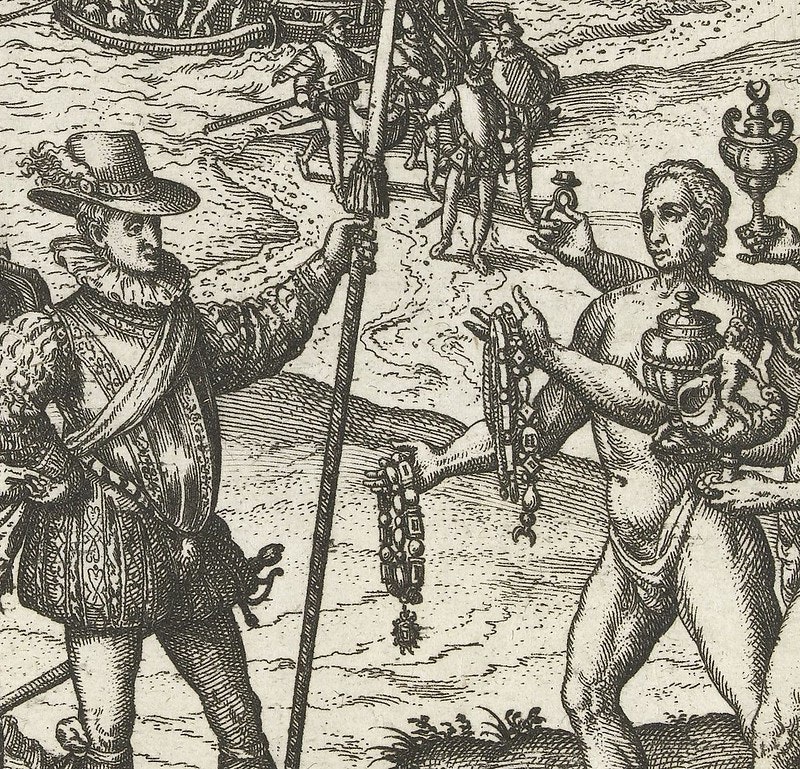 Detail from an engraving by Theodore de Bry, from 1592, which formed part of his "America-series", showing Christopher Columbus landing on the Caribbean island of Hispaniola in 1492 - Source.

Theodore de Bry, born in the Prince-Bishopric of Liege in 1528, lived and worked in Strasbourg, Antwerp, and London before he ultimately settled in Frankfurt, the centre of the European book trade. Trained as a goldsmith, he had successfully re-invented himself as a graphic artist in the 1570s and 1580s. In the final decade of the sixteenth century he would crown this transformation by introducing the technique of including copper engravings into printed books to Germany, thus creating a niche in the market for his lavishly illustrated coffee table books. His most monumental series of publications was the so-called 'De Bry collection of voyages'. Initiated in 1590, it would run until 1634, and comprise twenty-five folio volumes of European travel accounts to America, Africa, and Asia. Theodore and his two sons translated these narratives into German and Latin (occasionally modifying the texts), and added illustrations if the original versions did not contain any images, or if they did not meet their high artistic standards. Both the thirteen-volume America-series and the twelve-volume India Orientalis-series became luxurious collectors' items almost overnight, and have remained so to this day.

De Bry opened his America-series with the famous watercolour drawings by John White and Jacques Le Moyne de Morgues which Richard Hakluyt had given him for this purpose during his time in London. But when he had to find material on his own, he quickly turned to Columbus. De Bry devoted Volume IV of the America-series, published in 1594, to the account of the Milanese traveller Girolamo Benzoni who recounted the Genoese explorer's first voyage of 1492. One of the tailor-made engravings De Bry designed in his workshop in Frankfurt, predictably, captured the moment Columbus first set foot in the New World (pictured below). The illustration is centered around the encounter between Columbus, backed by two other servants of the Spanish monarchy, and a group of Native Americans. The way De Bry depicted both groups emphasizes the contrast between the Europeans and the Indians. On one side Columbus, immaculately dressed after a long oceanic crossing, is supported by two men who are heavily armed. It is clear that they are in control, both of the situation and of themselves. Their erect, confident poses are - metaphorically - still a world away from the unorderly manner in which the Amerindians of Hispaniola present themselves. They are naked, and appear to be unsure of what the encounter will bring. In an attempt to give the Spaniards what they desire, the Indians offer Columbus their precious metals, conveniently cast in traditional European shapes to ensure a good understanding. 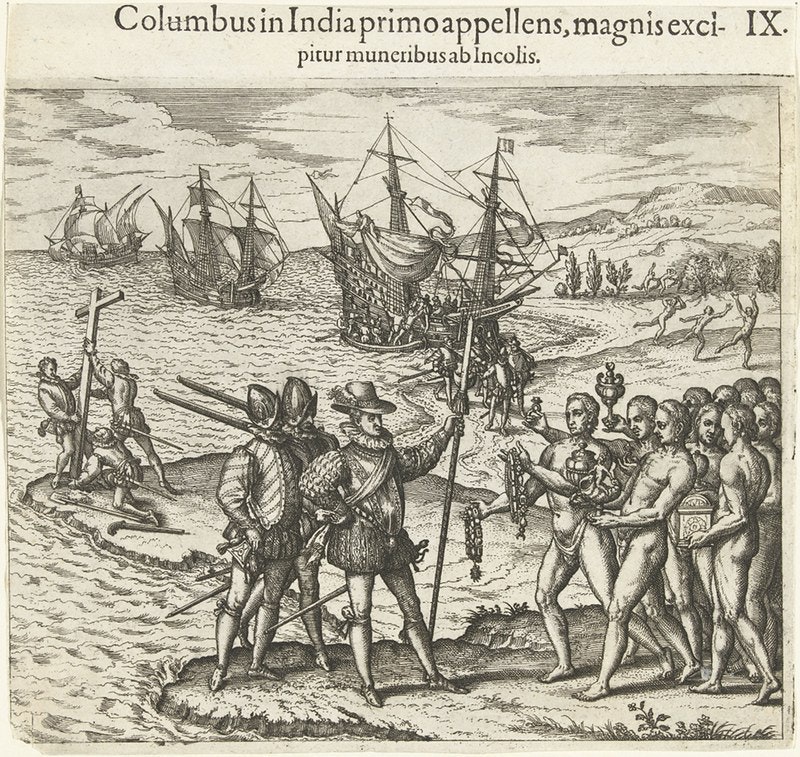 The engraving by Theodore de Bry, from 1592, which formed part of his "America-series", showing Christopher Columbus landing on the Caribbean island of Hispaniola in 1492 - Source.

The background of the engraving substantiates that what De Bry is showing us here is essentially a shift in power, something of which European readers in the late sixteenth century were all too aware. Columbus' impressive ships, the Nina, the Pinta, and the Santa Maria, refer to both this prologue to the moment De Bry captured, and the fundamental inequalities of the intercultural relationship that lie ahead. While more Spaniards disembark to take possession of the island, the natives flee after apparently having first approached the ships. The power shift is made abundantly clear by the planting of the cross on the left-hand side of the composition. One of the Spanish soldiers has even put his gun to one side to help establish Christianity in the New World - a powerful symbolic gesture that appears to be a precursor to Joe Rosenthal's iconic photograph of American soldiers raising the flag at Iwo Jima in August 1945.

The planting of the cross was particularly meaningful for Theodore de Bry. According to his own testimony, De Bry, a Calvinist, had been forced to leave his native Liege because of religious persecution. In Frankfurt, too, Calvinists were tolerated only because of their commercial importance to the city. It led De Bry to develop an ingenious strategy for his collection of voyages that would be acceptable across the Old World, for readers of every confessional background. Whereas the Latin translations he made were intended for a Catholic readership, his seemingly identical German editions reveal Protestant sympathies. When comparing the two versions one sees differences in words, sentences, paragraphs, and occasionally even entire accounts. Making alternative engravings, however, was too costly for De Bry's editorial strategy of confessional differentiation. Different illustrations for different readerships, moreover, would not enhance the authority of his flagship publication that was crucial to the commercial well-being of his publishing house. So for his engravings, De Bry's method was to enhance the contrast between civilized Christian travellers and the uncivilized heathen peoples of the non-European world, thus creating an iconography that could be appreciated in all corners of the divided continent.

Hence, for reasons entirely unrelated to his own adventures, Columbus was depicted in this fashion one-hundred years later. Yet De Bry's image, rather than a belated conclusion to Columbus' expedition, is only the beginning of the story. The De Bry collection was the single most influential European set of images to summarize what has traditionally been called 'the Age of Discovery'. Altogether it contained up to 600 high-quality copper engravings, around 40% of which were invented from scratch by the De Bry family in Frankfurt. The combination of these beautiful designs, printed at the hub of early modern European book culture by a highly skilful engraver from the Low Countries, and the increasing importance of colonial affairs for the European balance of power throughout the seventeenth and eighteenth centuries, meant that the De Bry images - especially those of America for which there had been no previous iconographic tradition - were copied time and again. Copies and derivations appeared in various contexts with every conceivable newly-attached meaning (and they still do today, mostly as book covers for studies on a myriad of different topics). For Columbus, in retrospect, we can establish that he was finally canonized - visually - in 1592 by Theodore de Bry. 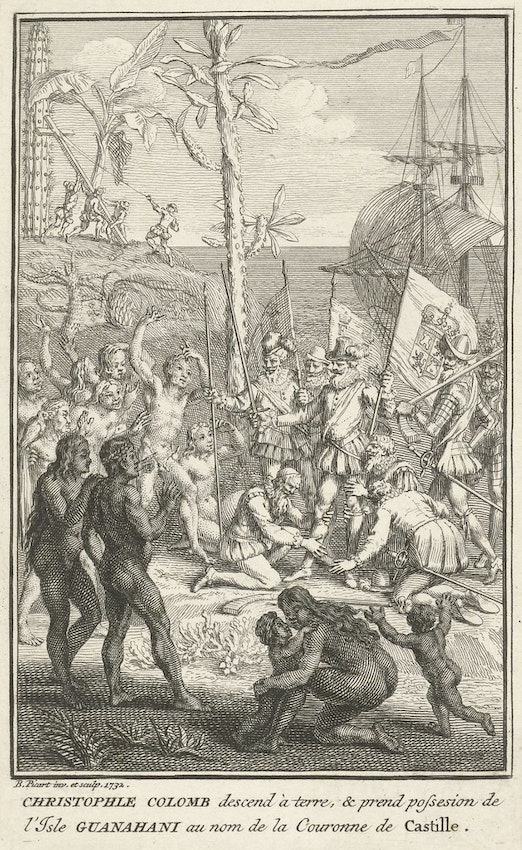 The image has since been changed in order to meet new stylistic conventions, but several elements have proved extremely persistent. In 1732, the Amsterdam-based Huguenot writer Bernard Picart, for his book entitled Ceremonies et Coutumes Religieuses de Tous les Peuples du Monde, created a very similar illustration of Columbus' landfall, which, if anything, only enhanced the contrast already insisted on by De Bry (pictured above). Picart's Columbus, surrounded by a more reassuring number of troops this time, was once again in obvious command of the situation. His own men clearly venerated him for his achievements, perhaps indicating to the Native Americans the identity of their leader. The standard with the coat of arms of the Spanish monarchy is a new addition, possibly a step too far for a Protestant like Theodore de Bry in an age of widely shared anti-Spanish sentiment, but a convenient means for Picart to emphasize the increasing importance of national sovereignty. Meanwhile the offering of gold, an intrinsic aspect of the sixteenth-century Leyenda Negra of Spanish greed, is gone. The Amerindians Columbus encounters here appear even more awe-struck than their indigenous predecessors in the De Bry engraving. The Indians in the foreground were probably given a darker complexion in order to put the encounter behind them in a fuller light, but the fact that skin colour became a yardstick to measure civility in the eighteenth century could have been an additional incentive. Finally, and intriguingly, even though Picart's agenda was one of religious toleration, the raising of the cross retained its place in the design.

Towards the end of the eighteenth century, the Amsterdam draughtsman Reinier Vinkeles was another artist to use the template Theodore de Bry had created almost two centuries earlier. In 1788, Vinkeles made an etching of Columbus' arrival in the New World that discarded Picart's addition of additional Spaniards, and reinstated Columbus as the singular hero of the expedition, much like De Bry had done before him (pictured below). The sword still conveyed the reassuring message that the Europeans were in control, despite the turbulent developments in North America immediately prior to Vinkeles' composition. The perspective of Vinkeles' image is identical to that of De Bry, with ships in the distant background and sloops with additional colonists approaching the shore. Behind Columbus, the cross is planted in a way that faithfully resembles the De Bry composition, watched with curious interest by the Native Americans who display the similar mixture of fear and respect that characterized De Bry's naked Indians. Vinkeles, like Picart before him, did not depict the giving of New World gold and silver, but instead appears to have embellished the image by adding a crowned head among the Amerindians (with arguably the most fearful complexion of the entire group). Once again, although this time deliberately, the skin colour of the Amerindians has been modified to underline the racial differences between both groups. 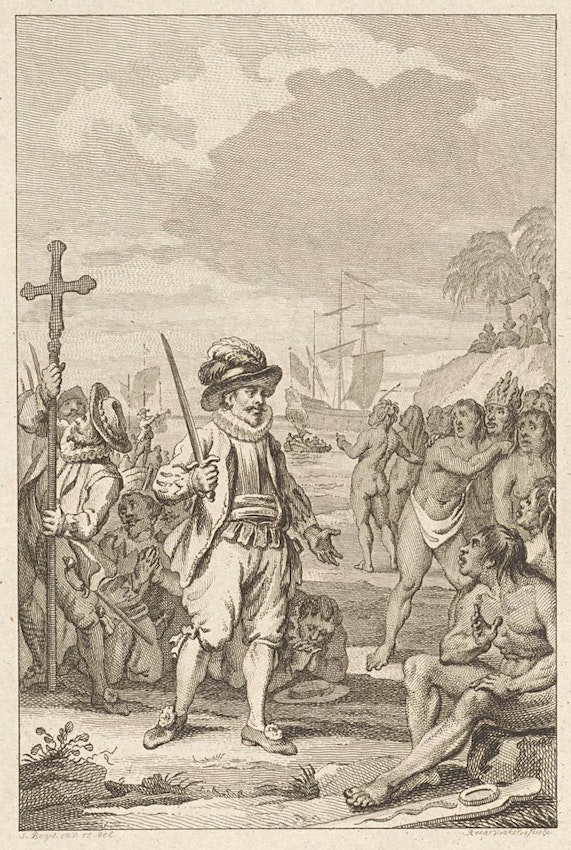 The nineteenth and twentienth centuries produced many more designs that were directly or indirectly derived from the De Bry engraving, as anyone who does a Google search on 'Columbus' and '1492' can establish. They are all different, but very few of them are new. All insist on the juxtapositions between technology and handicraft, civility and innocence, religion and ignorance, and, most importantly, power and dependence. Some of these 'modern' representations of the arrival of the first European fleet in America are bound to make most twenty-first century viewers cringe, especially when we contemplate that some of them were (and still are?) used in primary schools in the United States and elsewhere to celebrate the historic birth of a 'new' (all too often implying 'better') world. Theodore de Bry's design already harbours these uncomfortable notions of an irreversible shift in power. One could argue that it assisted in facilitating the demographic and humanitarian disaster that followed. That, of course, is something historians will never be able to ascertain. Perhaps, if nothing else, at least this wonderful engraving can help us to reflect on how detrimental the routine of simple ethnographic copying-and-pasting can be.

Michiel van Groesen is Lecturer in Early Modern History at the University of Amsterdam, where he specializes in early modern Atlantic history and the history of news. He is the author of The Representations of the Overseas World in the De Bry Collection of Voyages, 1590-1634 (Brill 2008; pbk 2012), and editor of the forthcoming volume The Legacy of Dutch Brazil (Cambridge UP). In 2013, he was the Queen Wilhelmina Visiting Professor at Columbia University in New York.