A Queer Taste for Macaroni

With his enormous hair, painted face, and dainty attire, the so-called "macaroni" was a common sight upon the streets and ridiculing prints of 1770s London. Dominic Janes explores how with this new figure — and the scandalous sodomy trials with which the stereotype became entwined — a widespread discussion of same-sex desire first entered the public realm, long before the days of Oscar Wilde. 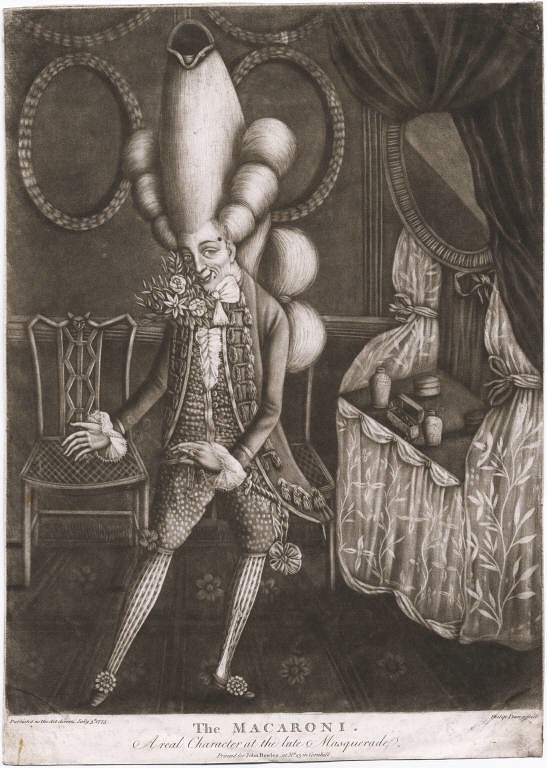 The Macaroni. A Real Character at the Late Masquerade (1773), mezzotint by Philip Dawe — Source.

It has sometimes been thought that the figure of the homosexual man only emerged to widespread visibility at the end of the nineteenth century with the sensational revelations that attended the trials of Oscar Wilde in 1895. It is true that the term "homosexual" was not invented until the mid-nineteenth century, and indeed was not widely used in Britain until around the time of World War II. But, of course, that does not mean that in previous centuries same-sex desire was unknown and its practitioners unremarked. That this was particularly the case for the eighteenth century is something that can be seen from the art and visual culture of the time.

Georgian Britain's vibrant tradition of satire — played out in the prints and pamphlets of the day, and some of it downright crude — enjoyed an important role in political life. Compared with many other European countries, there was a surprising degree of latitude in Britain to be rude in public about prominent figures. All this was celebrated as representing the liberties of the free-born Briton. Mockery mostly relied upon popular perceptions of deviance not only from political but also from cultural norms of behaviour, and men who allegedly aped the tastes and mannerisms of women came in for particular abuse. It has long been argued that such figures — known as fops, beaux, and dandies, among other terms — were mocked because of a hostility to effeminacy. While this no doubt has some truth to it, one particular term newly coined in the 1760s, "macaroni", also became associated with sodomy. 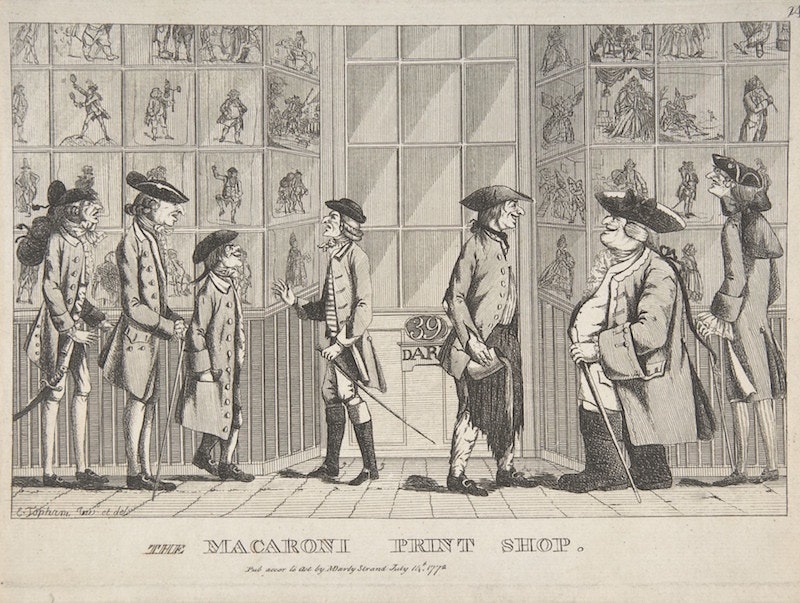 The Macaroni Print Shop (1772), an etching by Edward Topham published by Matthew Darly. It shows crowds gathered outside the Darly shop, the thriving epicentre of the trade in macaroni prints — Source.

The dandified man of fashion was no stranger to rumours of vice. As "Ferdinand Twigem" wrote in The Macaroni: A Satire (1773), "what pigmy monsters teem / what crowds of beaus effeminate are seen", who first blush at their acts of dissipation but afterward give way to all indulgence. Earlier in the century it had been the aggressively masculine "rake" who was associated with vices such as excessive drinking, gambling, and whoring. Effeminate "fops" in the Restoration and earlier Georgian periods were vapid, enervated men who were likened to weak and feeble women. Both the rake and the fop were characterised by their repeated attempts to gain the confidences of respectable women but were mocked for being, respectively, over- and under-achieving in their endeavours. Susan Staves is one scholar who has been notably keen to assert that the allegedly effeminate fop was not some sort of proto-homosexual but rather a kind of "new man": "the so-called effeminacy of these old fops was an early if imperfect attempt at the refinement, civility, and sensitivity most of us would now say are desirable masculine virtues".1 A queer quality had, however, crept into some uses of the word "fop" by the mid-eighteenth century, particularly when employed in association with the term "macaroni". 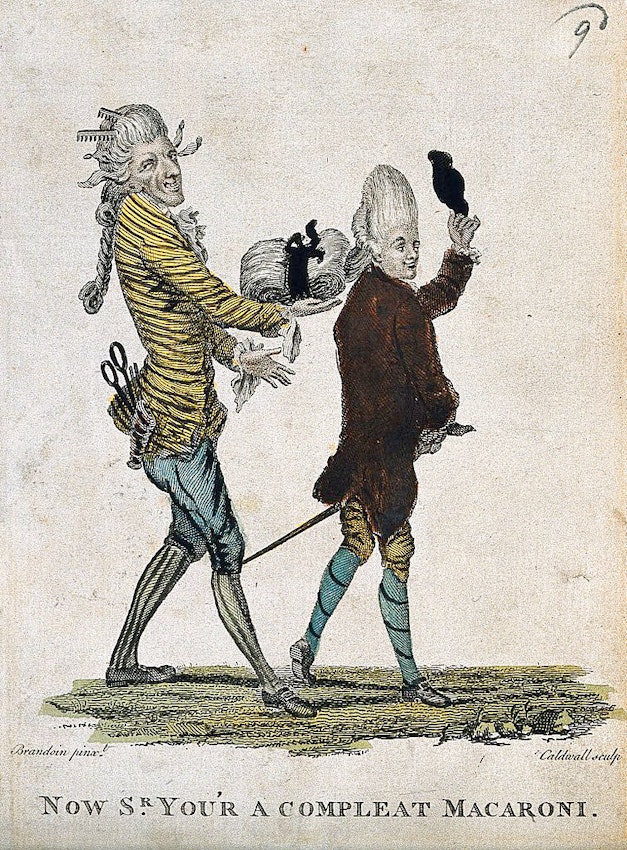 Yale University houses an excellent collection of the furniture, objets d'art, books, and prints once owned by the prominent connoisseur, writer, and politician Horace Walpole, the son of the man generally referred to as Britain's first prime minister, Robert Walpole. Horace, who was not a married man, presented himself as something of an old-school fop and it was he who first recorded the existence of a "Maccaroni club" in 1764 which consisted of "all the travelled young men who wear long curls and spying-glasses".2 This trait of being “travelled”, or of at least adopting certain Continental affectations, was particularly salient for the identity of the macaroni, and indeed lies behind the slightly peculiar label itself. Whilst British patriots rejoiced in roast beef, some of those recently returned from the Grand Tour flaunted their newly acquired tastes for Italian cuisine — with a supposed penchant for macaroni pasta in particular.3

As with food, so it was with the wardrobe — a certain flair for Continental fashion being an essential aspect of macaroni life, and one mocked in hundreds of satirical prints. One such print, A Macaroni Dressing Room, published in 1772, shows a group of affected, fashion-obsessed men. At the centre of the print an individual wearing facial beauty patches has his wig attended to by a flamboyant hairdresser and his black assistant. Another man practices fencing and a third plays with a pet cockatoo. 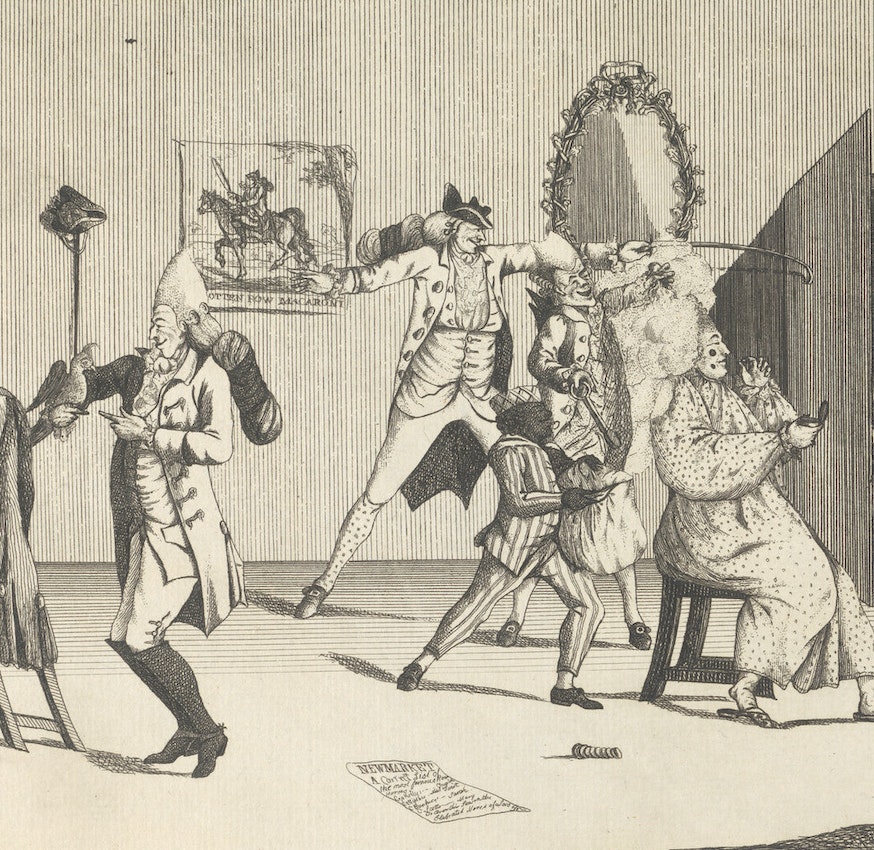 The implication was not merely that they had fallen prey to the supposed vanity that was held to characterise women of fashion, but also that they were in thrall to French-derived notions of the elite lifestyle. Dandyism, therefore, was equated with a treasonous flirtation with the nation’s luxury-obsessed enemy across the Channel. Furthermore, so scholar Peter McNeil argues, this flair for outlandish styles can be coded in terms not simply of effeminacy but also of sexual preference: “by the 1760s when the macaroni emerged, such attention to fashion was read as evidence of a lack of interest in women, or as potentially unattractive to women”.4 The macaronis in their dressing room were, from this point of view, dressing up for the benefit of each other, and so snubbing the ladies. Indeed, permeating all these late eighteenth-century notions of the macaroni is the idea that strange cuisine and dress were not the only unconventional customs these travelled young men brought back from abroad. Italy, in particular, was associated by the Protestant British with perversity because of the influence of an unmarried Roman Catholic priesthood which, it was thought, expended its sexual energies on cuckoldry and sodomy. The further implication was that British aristocrats might also bring a taste for such vices back with them from their travels. 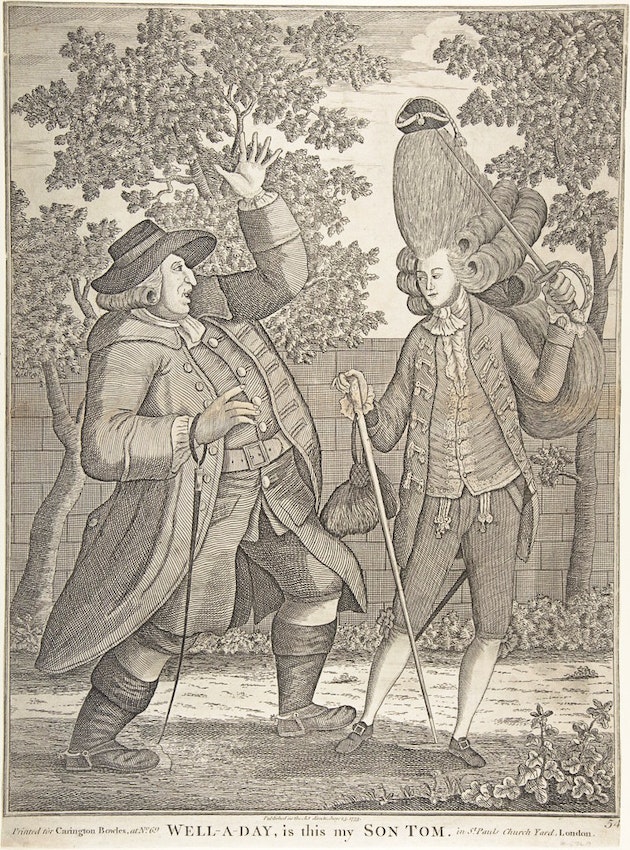 Well-a-day, Is this my Son Tom (ca. 1773), after Samuel Hieronymus Grimm, published by Carrington Bowles. Other versions explicitly label the father as a farmer and give a more urban setting, showing it wasn't just travels abroad deemed to make a macaroni but also simply the influence of the city — Source.

The early 1770s saw a series of scandals in fashionable circles of London society that further wedded the term of macaroni to a queer inclination and truly placed the figure of the homosexual man into the public realm. Perhaps the most prominent of these events concerned a certain Captain Robert Jones who, in July 1772, was convicted at the Old Bailey for sodomizing a thirteen-year-old boy and was sentenced to hang. In October, however, he obtained a royal pardon on the condition that he left the country after new evidence suggested that the boy's testimony may have been unreliable. The pardon was greeted with accusations of an establishment cover-up since Jones was well known in the fashionable world (being noted for having popularised skating and fireworks). The tone of the abuse that was directed towards Jones is clear from sources such as a letter that was published in the Public Ledger on August 5. The letter alleged that "this MILITARY MACCARONI" was "too much engaged in every scene of idle Dissipation and wanton Extravagance." Sodomy, it was insinuated, was not just the secret vice of an individual but a defining characteristic of a recent type of dandy. Such men were warned: "therefore, ye Beaux, ye sweet-scented, simpering He-She things, deign to learn wisdom from the death of a Brother".5 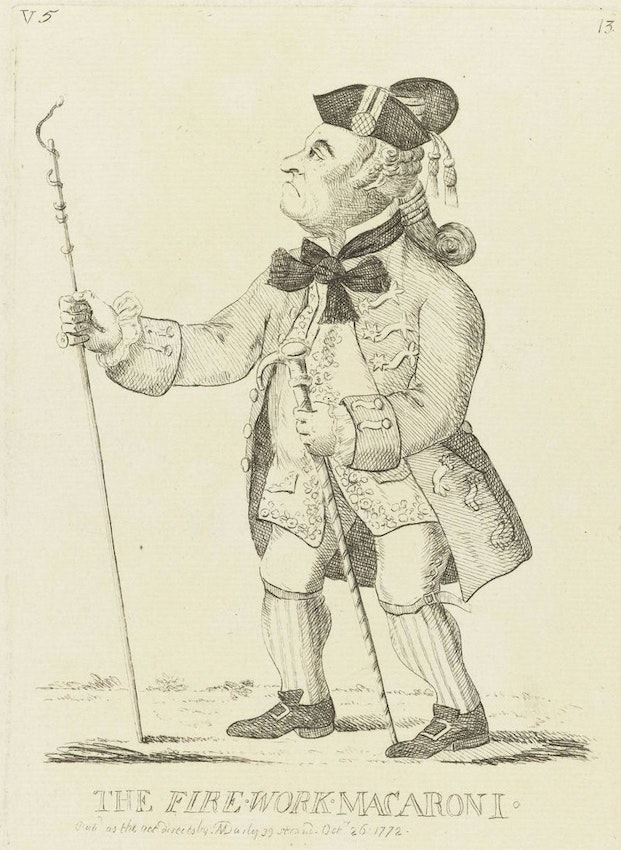 The Fire-Work Macaroni (1772), published by Matthew Darly, and widely thought to depict Captain Jones who known for his work with fireworks – Source.

These events were recalled in an undated diary entry made in late March or early April 1778 by a certain Hester Lynch Thrale Piozzi (1741–1821):

In the Year 1772 one Captain Jones was convicted of Crimes against Nature, and sentenced to die: He was a Gentleman famous for his Invention in the Art of making Fireworks, and adapting Subjects fit to be represented in that Genre; & had already entertained the Town with two particular Devices which were exhibited at Marylebone Gardens & greatly admired: viz: the Forge of Vulcan in the Cave of Mount Etna, & the calling Eurydice out of Hell — If he is pardoned says Stevens, He may shew off the Destruction of Sodom and Gommorrah; it will have an admirable Effect.6

Piozzi was a friend of the encyclopaedist Samuel Johnson and a member of his literary circle. After her first husband, the brewing magnate Henry Thrale, died in 1781, she was left independently wealthy and three years later wed the Italian musician and composer Gabriel Piozzi. She was prolific in her letter writing, and in 1776 began to keep a diary in which she commented on, amongst other things, people she knew or thought might be sodomites or "Sapphists" (i.e., lesbians). She wrote, for instance, the following on March 29, 1794, after talking with a friend about men such as Horace Mann, who had been a close friend of the aforementioned Horace Walpole:

Mrs Greatheed & I call those Fellows Finger-twirlers; — meaning a decent word for Sodomites: old Sir Horace Mann & Mr James the Painter had such an odd way of twirling their Fingers in Discourse; — & I see Suetonius tells the same thing of one of the Roman Emperors "nec sine molli quadam digitorum gesticulatione [with eloquent movements of his fingers]."7 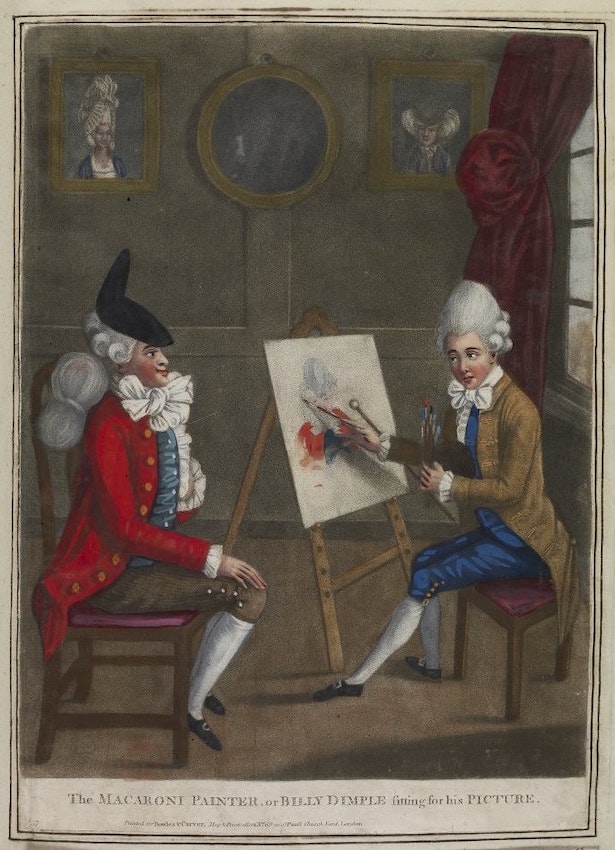 Image by Robert Dighton showing the flamboyant portrait painter Richard Cosway (who went by the nickname of the "Macaroni Painter" or "Billy Dimple") himself posing for a portrait — Source.

The public furore around the disgrace of Captain Jones appears to have seen the linkage of two previous stereotypes: the libidinous rake who would prey on both the wealthy and vulnerable of both sexes, and the effeminate fop whose nature was akin to that of a woman. These two stereotypes have informed popular perceptions of male same-sex desire through to the present day. In the nineteenth century a new medicalised conception of the homosexual person as a psychological deviant established a quasi-scientific basis for thinking about such individuals, but this did not replace older notions which were based on combined transgressions of gender and sexuality. These ideas underpinned public understanding of the most sensational sodomy trials of the Victorian period — those of Oscar Wilde in 1895. He too was seen both as perversely effeminate in his fashionable posing and, at the same time, as aggressively predatory towards male youths. But as shown by the case of Captain Jones, and the figure of the macaroni with which he was aligned, there was a complex history of queer dandyism long before Oscar and his lover Lord Alfred Douglas became the most notorious sodomites in Victorian Britain.

Dominic Janes is Professor of Modern History at Keele University. He has published a number of books on the arts, gender, and sexuality in Britain since the eighteenth century, including most recently Oscar Wilde Prefigured: Queer Fashioning and British Caricature, 1750-1900 (UCP, 2016).