John Martin and the Theatre of Subversion

Max Adams, author of The Prometheans, looks at the art of John Martin and how in his epic landscapes of apocalyptic scale one can see reflected his revolutionary leanings. 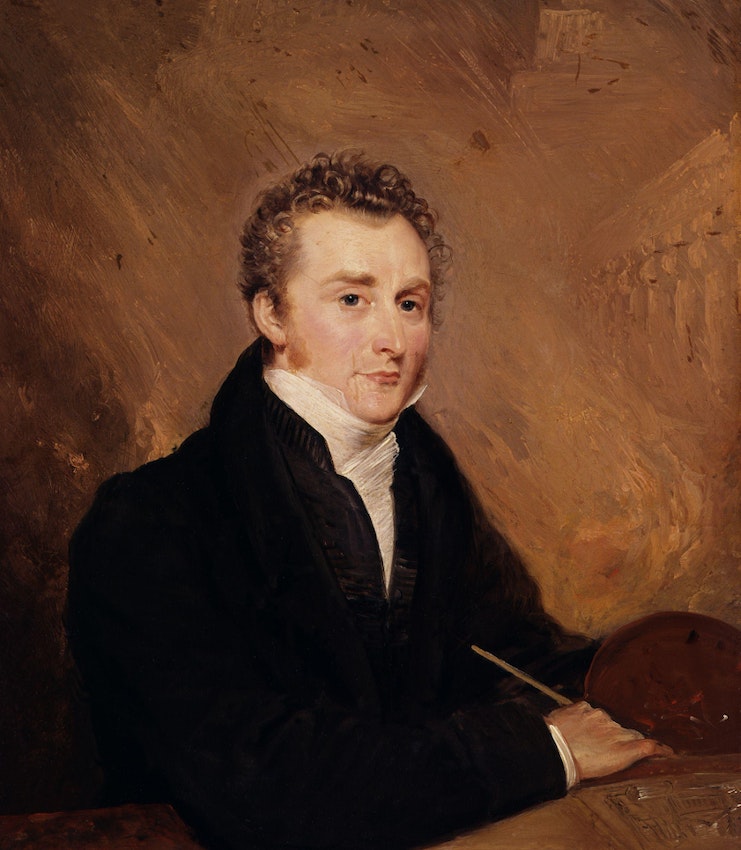 Detail from a portrait of John Martin, painted in 1839 by Henry Warren — Source

John Martin, born in the week that the Bastille was stormed in July 1789, was an instinctive revolutionary. His generation may have suffered from a misty-eyed envy of new-found liberties in America and France, but they understood what practical revolution might mean at home and they strove to achieve liberation from repression and tyranny without bloodshed; very largely they succeeded.

Martin has often, and wrongly, been seen as a religious fanatic by a comprehensive misunderstanding of his paintings and by false association with his schizophrenic arsonist brother. He has also been portrayed as a Luddite (by critics who should have known better) and by Ruskin, a late contemporary, as a mere artisan in lamp-black. Poor Martin. Despite his very evident technical deficiencies as a painter – he inevitably suffers by comparison with his friends and contemporaries Turner and Constable – he was equally adept at creating a theatrical sense of a world undergoing irreversible change, and more fervent than either in his desire to be an engine of that change. If there were dramatists better placed to portray the dilemmas of the human condition, and one immediately thinks of Shelley and Byron, of Delacroix and Dickens, no-one came closer than Martin to designing the perfect sets on which to act out the drama: he was the supreme architect and engineer of the sublime.

To start at the curtain’s uncertain opening, we see Martin, a Geordie ingénue with a chip on his shoulder, arrive in London to find that its streets are not paved with gold but with beggars. He makes his debut in the greatest city on earth in 1806, the year in which Pitt the Younger and Charles James Fox die and in which Nelson’s pickled body is carried up the Thames in mawkish pomp. Martin struggles against more proficient competition: has insufficient imagination in his mental palette other than to paint the misty blue hills of his native Northumbria and dream of maidens in skimpy veils straight out of Ovid. By 1812 his mood has darkened: his radical friends the Hunts have been jailed for seditious libel (the Prince Regent was a fat, useless libertine, a drain on the treasury and a traitor to his Whig friends but saying so in the pages of the Examiner in such terms was asking for trouble); the first global war showed no sign of ending, nor did the horrors of wage-labour poverty. Caricaturists had a field day: they could not be imprisoned. Martin’s response was weightier, loftier. His Sadak of 1812 is a dark, portrait-format theatre flat of abysmal fire in which the struggling righteous loner (his friends the Hunts, the beggar, or Martin himself: take your pick) faces alpine odds in seeking the Waters of Oblivion. 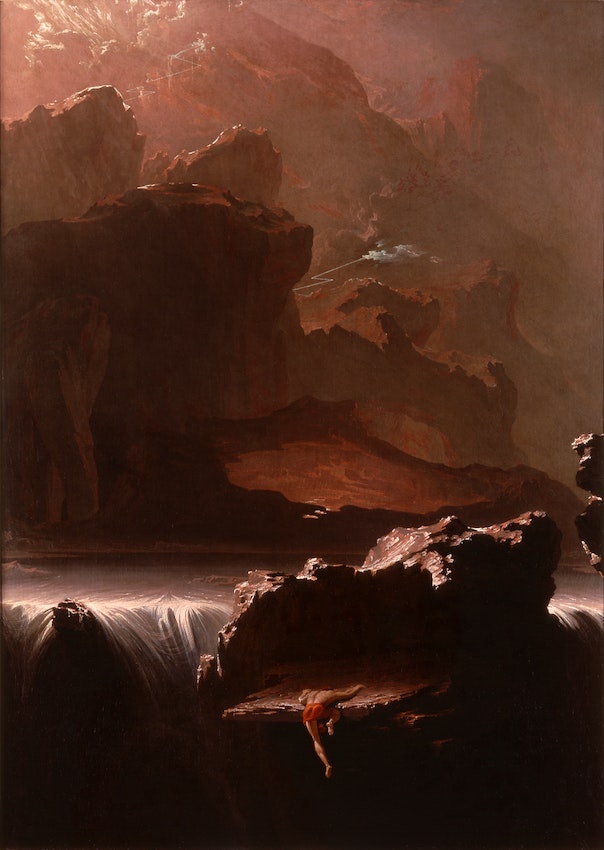 From here on in Martin was on a mission to bring down the unjust from their lofty perches to the level of the populace. For him scale was everything: his deployment of trompe l’oeil devices, three-dimensional column-and-tunnel special effects and epic scales has often, and rightly, been seen as a forerunner of the Hollywood movie set of the 1920s and beyond. By 1821, when he produced his Old Testament masterpiece Belshazzar’s Feast (a thinly disguised libel on the self-same Prince Regent made more potent by his coronation as George IV and the grotesque accompanying feast) Martin was exploiting his audience’s familiarity with the Bible to recreate for them the immensity of its drama, its injustices and the majesty of the retribution which God (not Martin’s God – he was a sceptic) could and would visit on those who committed the sin of hubris. 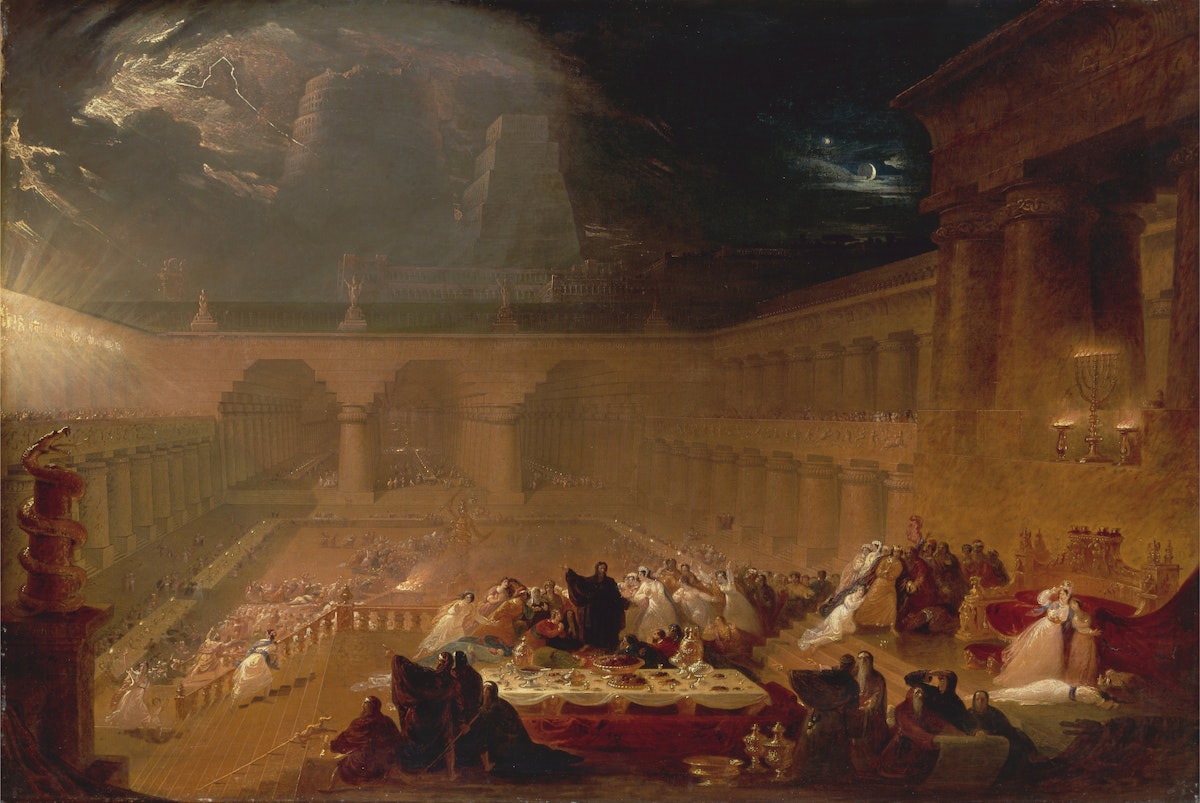 The Tate Gallery, which recently hosted the largest Martin exhibition for over a hundred years, hung his paintings wrong: that is to say, too low, with the viewer’s eye line directed into the centre of the picture when Martin’s intention, I am certain, was to force the viewer to look up, up at the crenellated towers of the tyrant, to be left in no doubt of the task required in bringing its monuments down. Martin liked to open his play right in the middle of the drama, just like a modern movie director: he drops us into the action so that we are part of it, believe we can be part of it. Martin is inciting us to tear down the house; but we are certain, as participants, that we start at the bottom, as Martin had.

Shelley, whose sympathies were in tune with Martin and with Prometheus, the liberator of humanity, chose to set Ozymandias (1818), his own cameo drama of fallen tyranny, after the action had long finished, in the shapeless desert where two vast and trunkless legs of stone stood as a quiet, if profoundly eloquent, epilogue to Martin’s revolutions. Shelley was interested in what the world would be like after the revolution and, in describing his idealistic new world in Prometheus Unbound (also 1821) he offered a later Romantic poet and activist, Karl Marx, the blueprint for the real thing: a revolution every bit as fantastic as Martin’s.

The mid-1820s witnessed a reformist lull in Britain and abroad: opposition emasculated by internal rivalry and suicide, the lassitude of once-fervent ideologues like Wordsworth and William Godwin (a friend of Martin’s); the announcement by critics like William Hazlitt of the passing of an age of action. Martin set himself to make money to support the realities of a large family and generous domestic establishment, and he was not the only one (he lost his first fortune to a dodgy banker). But the appearance of somnolence is an illusion, just like Martin’s various engravings of Paradise Lost during that decade. Britain’s creative revolutionaries were not done. The French have a phrase for it: reculer pour mieux sauter – draw back to take a running jump. In France itself dissatisfaction with the post-Napoleonic world would lead to revolution in 1830 and its diarist-in-oils, Eugène Delacroix, heavily influenced by Martin but more interested in the actors than the stage sets, has left us the supreme finale of the drama in Liberty Leading the People (1830), with its bare-breasted Amazonian heroine and her pistol-toting lieutenants climbing on piles of bodies to wave the Tricolore. It is virtually a curtain call. Not to be outdone, John Martin’s own brother Jonathan had been tried for his life after setting fire to York Minster in a suitably Promethean gesture and by 1830 was confined for life in Bedlam. Martin himself began to plan for a new world before the old had been brought down: he designed a new sewage system for London and evolved a curious idea for a circular underground railway to run beneath the streets of the capital: Babylon-on-Thames, as it was known in a public nod to his prescience. 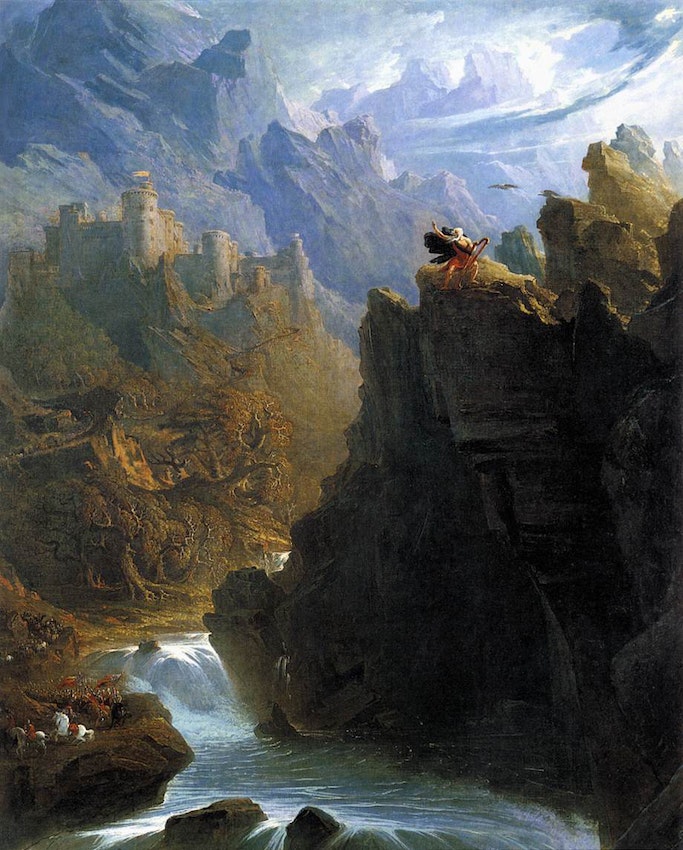 More subtle revolutionaries – Michael Faraday and Charles Wheatsone making sparks in the laboratory, the Brunels with their tunnels, the Stephensons with their belching locomotives and railways – were busy forging a completely new symbolic lexicon of steam, electricity and subterranean sublimity for artists to work up on their canvases. Turner, as so often, was first on the scene. He was there, when the old Houses of Parliament burned down in 1834, to record the irony of a Reform Bill, passed the year before, which left Parliament more or less unreformed. He was there when the old warship Temeraire, a symbol of the patriotic Heart of Oak Royal Navy, was towed up the Thames by a steam tug to be scrapped. He was there, in spirit at least, to record the impression which the onrushing steam railway age left on a generation which had previously only known the pedestrian power of the horse and millwheel (Rain, Steam and Speed, 1844). In doing so he leaves us still physically reeling, as if the action is now so hot that we cannot, literally, focus on it. The stage has become a roundabout and we are dizzy, clinging on for dear life.

A look at Martin’s later works, from 1838 (when he and his son Leopold visited Turner in Chelsea to watch progress on the Fighting Temeraire) and his overtly populist and tediously static Coronation of Queen Victoria, to the ethereal beauties of Solitude (1843) and Arthur and Aigle in the Happy Valley (1849) might give the impression that Martin, like Wordsworth, had become an old fogey, too comfortable or cynical or tired to light the touch paper for any further apocalypse. The impression is understandable; but it is quite wrong.

One of the things I most admire about Martin is that, almost with his last breath, he had the guts to once more put on the costume of the grand ringmaster, crack his whip and serve up the greatest show on earth. Until The Great Day of His Wrath (1853) the victims of Martin’s retributive fury had always been tyrants or hubristic fools: Pharaoh; Lot; Belshazzar; Edward I, even. Now, as if to say ‘That’s all, folks!’ (and meaning just that) Martin took the set, the whole set, and burned it down, stage, proscenium arch, auditorium, theatre and all: the entire world is folded in upon itself in an unimaginable (by anyone but Martin) volcanic conflagration. Everything, everyone is terminally punished for every sin ever conceived. This is the Day of Judgement. The world ends. The End (and no curtain call). 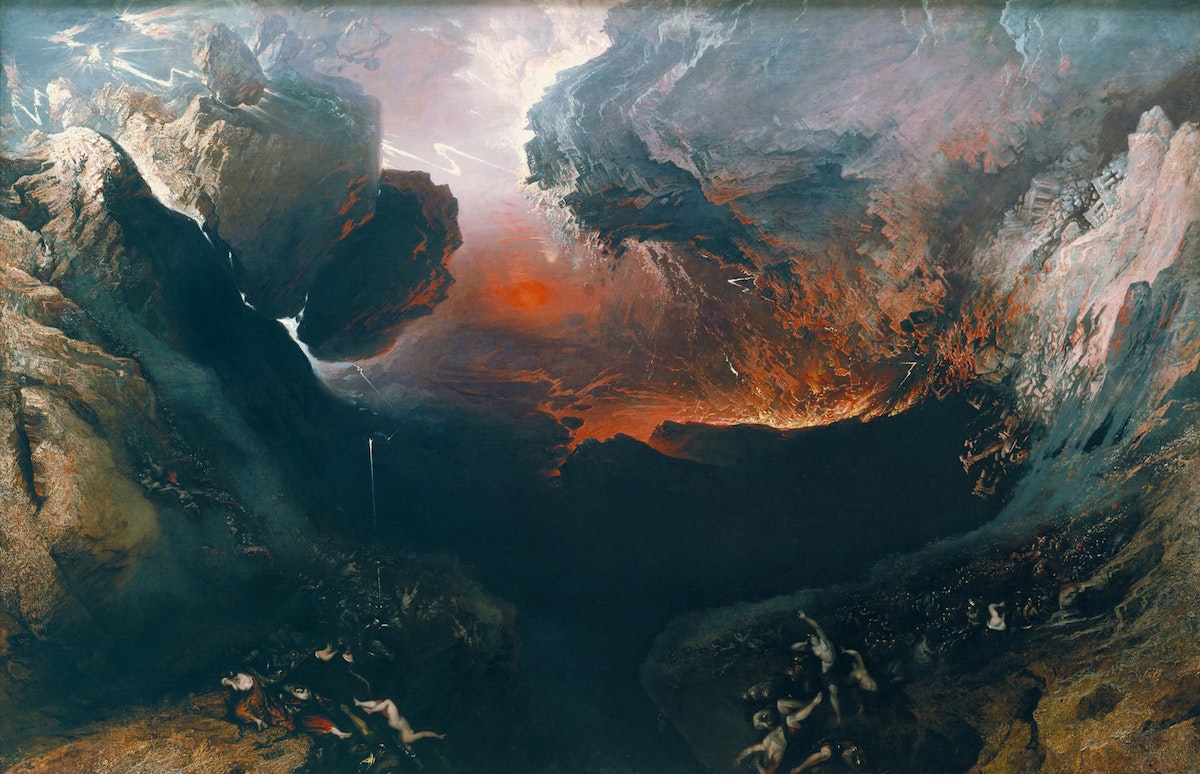 Max Adams was born in London in 1961 and after more than twenty years as an archaeologist turned to writing. His first major biography, published in 2005, aimed to rescue the reputation of a neglected naval hero, Admiral Collingwood (Weidenfeld 2004). His group biography of artist John Martin's circle, The Prometheans was published in 2009 and was a Guardian Book of the Week. Max's third neglected-Geordie biography, just completed, is a life of the first Englishman of whom one could write a biography: Oswald, the Dark Age Northumbrian king and saint. Max is a Royal Literary Fund Fellow at the University of Newcastle. His website: www.theambulist.co.uk/