In 1585 the Englishman John White, governor of one of the very first North American colonies, made a series of exquisite watercolour sketches of the native Algonkin people alongside whom the settlers would try to live. Benjamin Breen explores the significance of the sketches and their link to the mystery of what became known as the "Lost Colony". 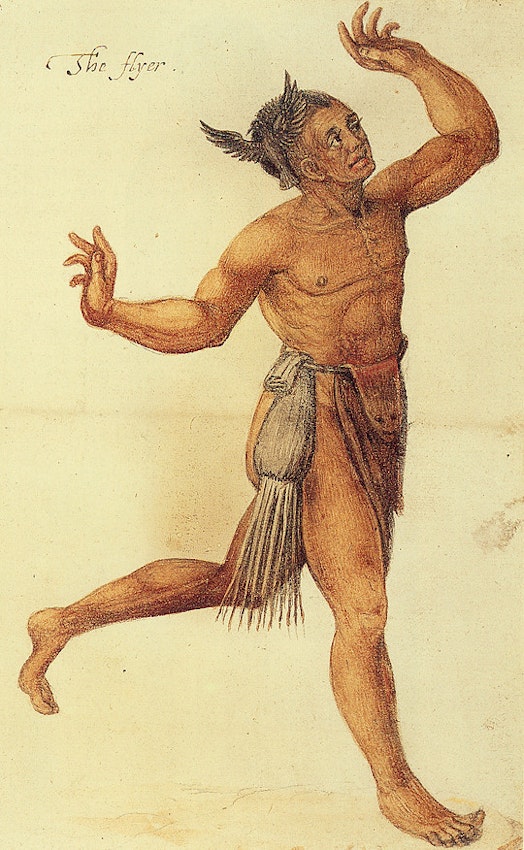 As lucklesse to many, as sinister to myselfe. Such was the Elizabethan colonist John White's gloomy assessment of his tenure as the first governor of Britain’s fledgling colony on Roanoke Island, Virginia. As White lived out his final days on an Irish plantation in 1593, he struggled to come to terms with his ambivalent legacy in the “Newfound Worlde.” Just eight years earlier, White had set out for North America as part of an expedition led by a fiery-tempered courtier named Sir Richard Grenville. This voyage was not without its challenges – White recalled laconically that in a battle with Spanish mariners he was “wounded twise in the head, once with a sword, and another time with a pike, and hurt also in the side of the buttoke with a shot.” Yet in this time White also witnessed natural marvels, helped build a new colony, and even celebrated the birth of his now-famous granddaughter, Virginia Dare, the first child of English/Christian parentage to be born on American soil. Ultimately, however, White’s ambitions ended in catastrophe, with the mysterious disappearance of the ninety men, seventeen women, and eleven children who comprised the Roanoke colony – a group that included his daughter and granddaughter.

In the centuries since White’s death, his story has diverged in an interesting way. Generations of schoolchildren raised in the United States can probably recall reading about the “Lost Colony” at Roanoke in textbooks. In these simplified accounts, White and his fellow colonists typically figure as doomed but visionary pioneers in a larger narrative of British-American exceptionalism.

Among professional historians, White is equally famous, but for rather different reasons. In recent histories of colonial British America, it is John White the artist, rather than John White the colonial governor, who takes center stage. This is because White was a watercolor painter of extraordinary talent whose works number among the most remarkable depictions of early modern indigenous Americans ever created.

To be sure, many other European contemporaries of White offered up visual depictions of native Americans. Readers of André Thevet’s early account of Brazil Les singularitez de la France antarctique (Paris, 1557), for instance, could expect to be treated to renderings of Tupí Indians harvesting fruit, singing songs (complete with musical notation recorded by Thevet) and even munching casually on barbequed human thighs and buttocks. 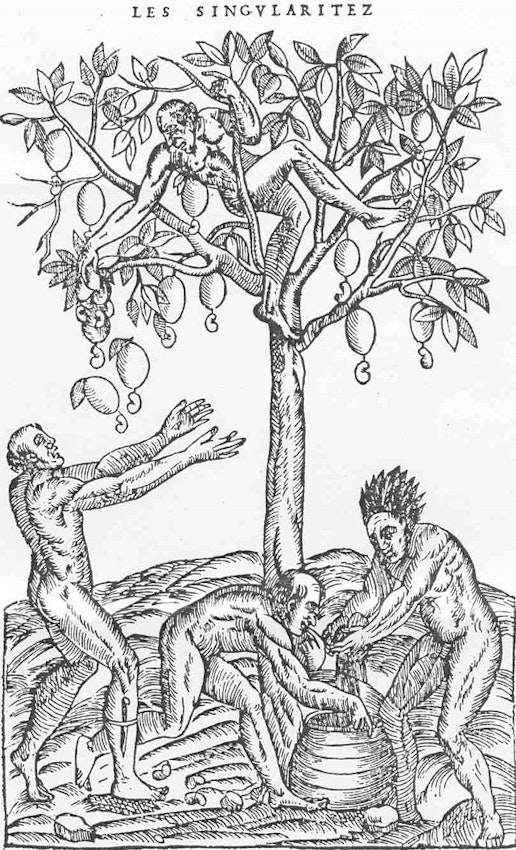 Yet White’s illustrations stood out among those of his peers. Rather than working via woodblock printing or engraving, White produced paintings in vivid watercolors. This allowed him to achieve a level of lifelike detail which printed illustrations couldn’t hope to match. One of the most striking examples of White’s eye for detail is found in his tender depiction of an Algonquian Indian mother with her daughter. 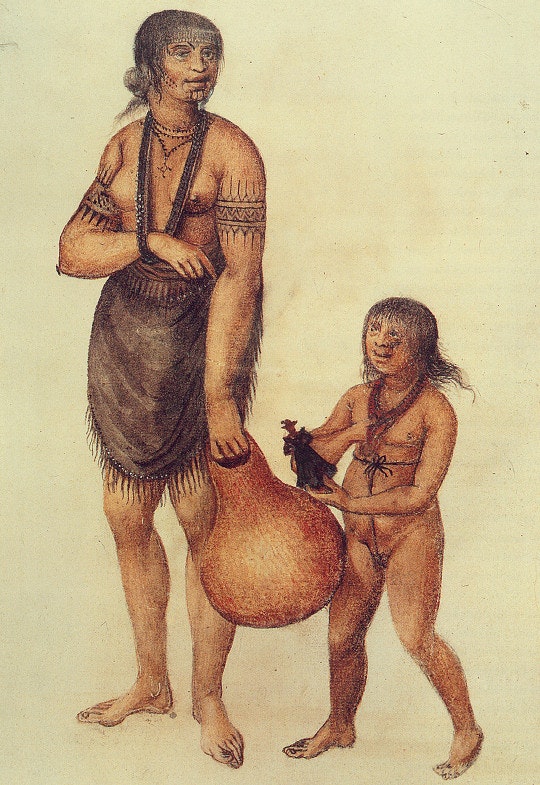 In 1585, one of White’s companions in Virginia, a natural philosopher and inventor named Thomas Hariot, remarked that the indigenous children he encountered in America “greatlye delighted with puppets and babes which are broughte oute of England.” White’s painting actually offers a direct visual proof of this observation: in the hands of the woman’s child, one can spot a tiny female doll wearing Elizabethan dress.

As the historian Joyce Chaplin notes in her book Subject Matter: Technology, the Body, and Science on the Anglo-American Frontier, 1500-1676 (Harvard University Press, 2003), this image was later recreated by the Dutch printmaker Theodore de Bry, who used White’s watercolors to create engravings for Thomas Hariot’s A briefe and true report of the new found land of Virginia (1590). De Bry’s depiction shows the Indian girl holding not only “an English doll in Elizabethan clothing,” but “an armillary sphere,” which served as “an instructional and decorative representation of the globe and heavens” (Chaplin 36). 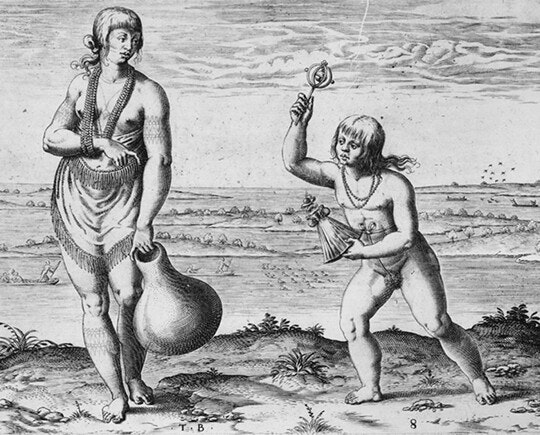 White also had a remarkable ability for “zooming out” from a scene to create an imagined isometric perspective. His painting of an Algonquian village stands out as one of the most detailed depictions of indigenous American village life to survive from the sixteenth century. 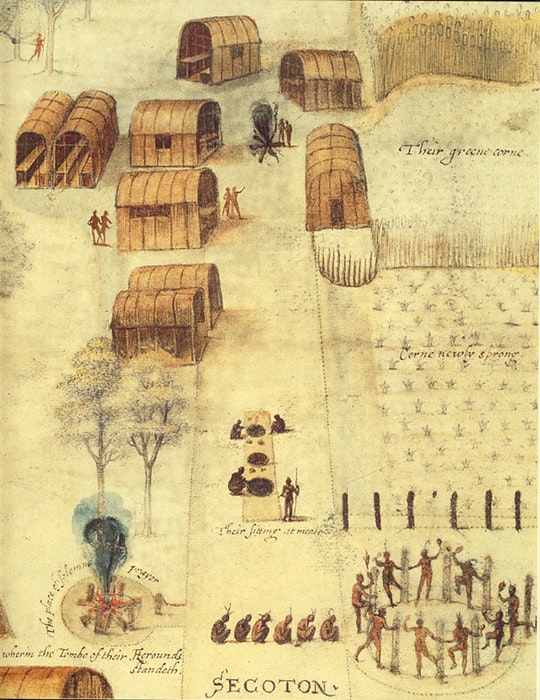 As the detail of the dancing circle in the lower right of this image suggests, White seems to have had a particular interest in Algonquian religious ceremonies. Another painting by White along similar lines gives a precious glimpse of pre-contact American Indian religious practice and daily life: 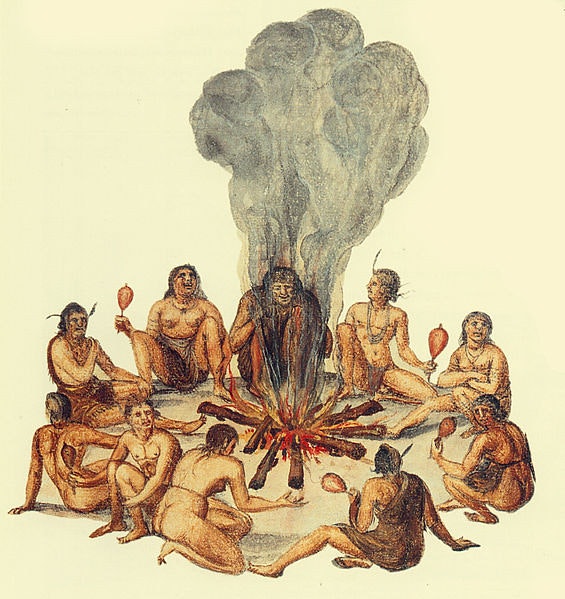 What, then, was White’s final legacy? In a narrative first printed in Richard Hakluyt's Voyages, White described his return to Virginia in 1590 in search of the colonists he had left at Roanoke (he had returned to England three years earlier in efforts to obtain “supplies, and other necessities”). His account evokes the haunted landscape of a ghost story, and its eerie details have made it part of American folklore ever since. On the 17th of August, White recalled, three ships under his command reached Roanoke, where they "found no man, nor signe of any that had been there lately." The next evening, one of White's sailors spied “a fire through the woods” and the men “sounded a Trumpet, but no answer could we heare.” The light of the next daybreak revealed that this was “nothing but the grasse, and some rotten trees burning.”

Finally, however, White found evidence of the colonists’ wherabouts. In a tree, he discovered "three faire Roman Letters carved C. R. O.": this was a pre-arranged maker which White understood “to signifie the place where I should find them”: Croatan. White's suspicion was confirmed with the discovery of a scene that is now almost mythical:

We found no signe of distresse; then we went to a place where they were left in sundry houses, but we found them all taken downe, and the place strongly inclosed with a high Palizado [i.e. a palisade of wooden stakes], very Fortlike; and in one of the chiefe Posts carved in fayre capitall Letters C R O A T A N, without any signe of distresse, and many barres of Iron… and such like heavie things throwne here and there, overgrowne with grass and weeds…

Interestingly, White’s account here connects his two identities as governor and painter. He remarks that his men “found diverse Chests which had been hidden and digged up againe” surrounding the palisade. Among these chests, White was surprised to find objects which he knew “to be my owne”: “books” and “pictures” he had created in the years before, now “scattered up and downe…[and] spoyled.”

In the end, White was unable to follow up on these strange clues: storms forced the expedition’s ships to turn back before reaching Croatan, and he returned to Britain with the mystery unresolved. The ultimate fate of the Roanoke colonists continues to be debated. Some have conjectured that White’s fellow colonists may have opted to join a local Algonquian Indian tribe and adapt themselves to the very different (and rather more effective) Amerindian methods of contending with the harsh American landscape.

It is unlikely that we’ll ever know what happened – but if White’s daughter and granddaughter really did become incorporated into an Indian tribe, it would have made a strange sort of sense. Few sixteenth century Europeans looked upon indigenous Americans with anything other than a jaundiced and prejudiced eye. Yet White’s sensitive and humane portrayals of daily life among the Algonquians tell a different story, and suggest that his own stance toward the native peoples he encountered in the New World was rather more complex. In White’s sensitive depiction of the Algonquian woman and her child holding a European doll, perhaps we can discern a foreshadowing of the hybrid Euro-American fate of his own daughter and grandchild. The intertwined tales of the failed colony White governed, the family he raised, and the artworks he created offer one of the earliest examples of the mingling of cultures that would define the history of the Americas in the centuries to come. 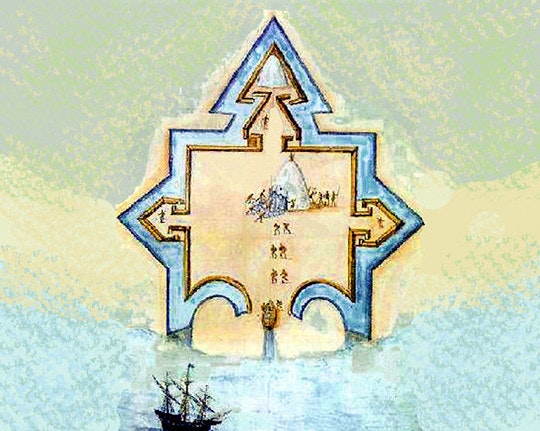 Benjamin Breen is an Assistant Professor of history at UC Santa Cruz. He is the author of the book The Age of Intoxication: Origins of the Global Drug Trade (University of Pennsylvania Press, 2019).