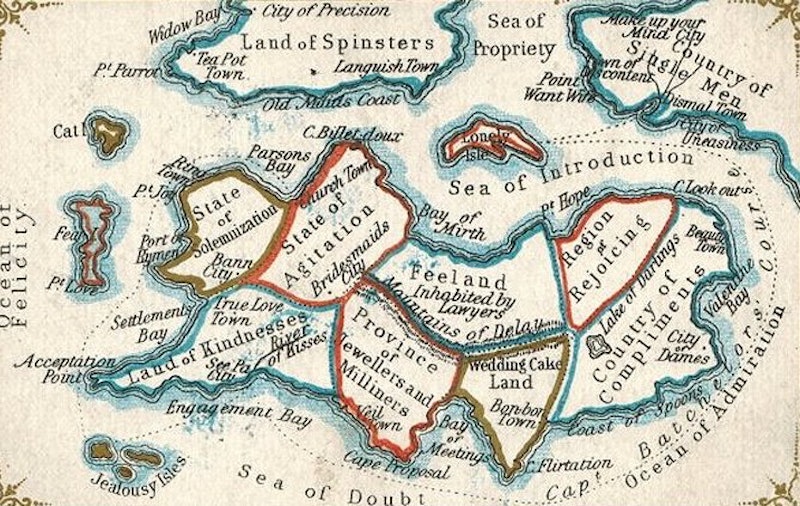 As mapmakers began to get a better and better sense of the earth's geography, some of the more playful amongst them, as well as some new to the art, turned their attentions to charting more ambiguous lands — creating maps that depicted ideas as places and the machinations of the mind and heart as a journey. While allegorical maps have been around for centuries, if not millennia, it wasn't until the eighteenth and nineteenth century that the phenomenon really took off, with some of the most wonderful examples being those dedicated to charting the highs and lows of love, courtship, and marriage. This particular focus of the allegorical map can trace its origins to the Carte de tendre, conceived by Madeleine de Scudéry for inclusion in her novel Clélie (1654-61) and engraved by François Chauveau. Here one can travel, by following the river of Inclination, from the town of Nouvelle Amitié (New Friendship) in the south to the town of Tendre (Love) in the north — that is if one can avoid the various pitfalls and obstacles which line the route, including the strangely inviting Lac D'Indiference (Lake of Indifference). 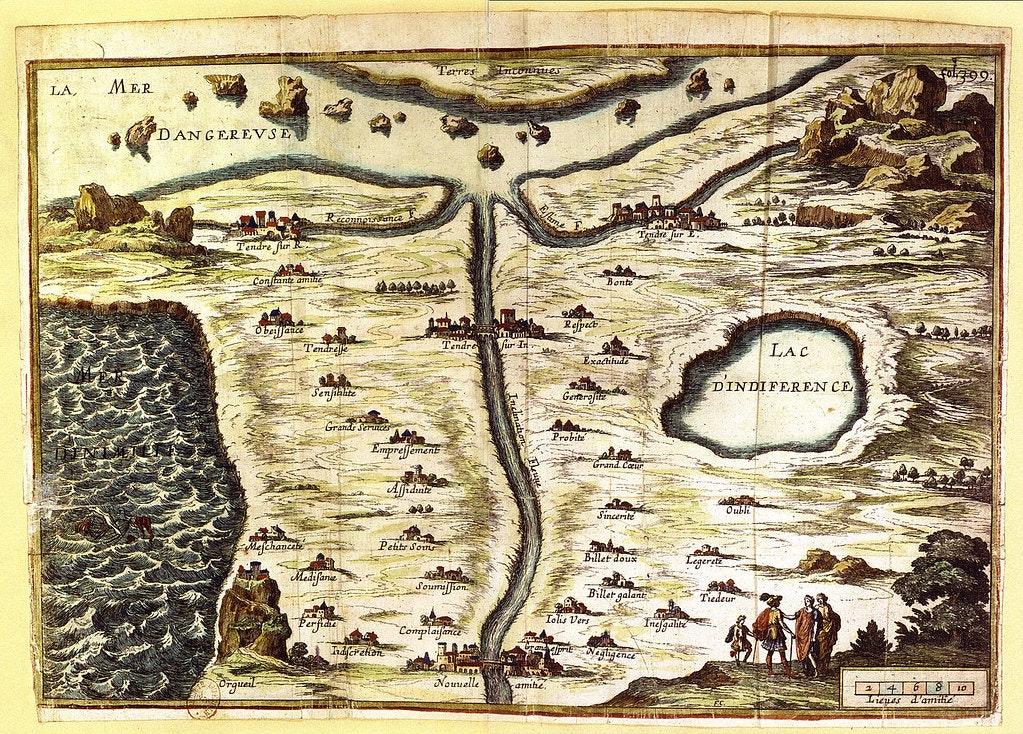 Many imitations and variations of the map followed, mainly focusing on the idea of courtly love, but these soon gave way to more libertine sentiments — a turn from the realm of love and friendship to a more overt focus on matrimony along with all the sexual themes this implied. The first of the so-called "matrimonial maps" could arguably be Thomas Sayer's A Map or Chart of the Road of Love, and Harbour of Marriage, published in 1748. Here, east of Knave's Land and north of Land of Desire, we find Cuckold's Shire, off its coast Cuckoldom Bay and Henpecked Sands, leading on to the double danger of Rocks of Jealousy and Whirlpool of Adultery. 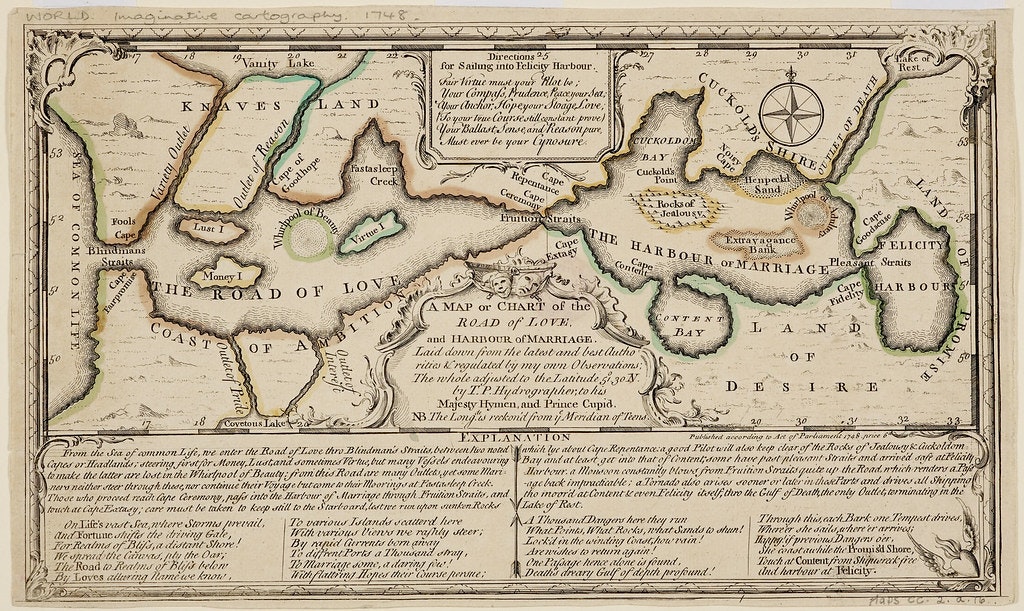 Thomas Sayer's A Map or Chart of the Road of Love, and Harbour of Marriage, 1748 — Source.

Some twenty years later, in 1772, the prominent English poet, essayist, and literary critic Anna Laetitia Barbauld published her brilliant A New Map of the Land of Matrimony, Drawn From the Latest Surveys created to accompany her poem "To Mr. Barbauld, with a Map of the Land of Matrimony" (1772). The following description comes from Kathryn Ready's fascinating 2016 article on the map:

Barbauld's 'New Map' gives prominence not only to the vicissitudes of courtship but also to the negative outcomes of marriage. It depicts the Land of Matrimony and its associated island of Divorce surrounded by the Ocean of Love, and a number of smaller land masses, including Friesland and Coquet and Prude Islands to the northwest, and the Enchanted Islands to the southwest. 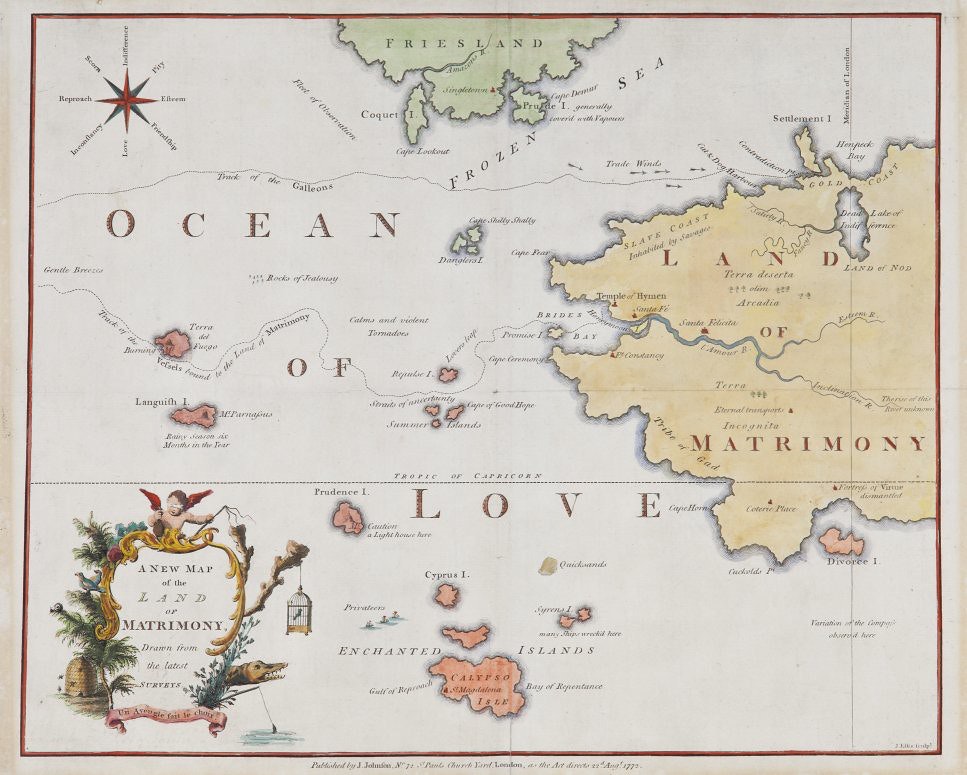 Anna Laetitia Barbauld's A New Map of the Land of Matrimony, Drawn From the Latest Surveys (1772) — Source (originally from Barron Maps).

From there a proliferation of variations on the format ensued, each home to a host of novel toponyms, including such gems as Divorce Island, Country of Single Men, Land of Spinsters, Mountains of Delay (Inhabited by Lawyers), Squabble Marsh, and Port Hymen (there's also a Temple of Hymen).

Georg Mathhaus Seutter's Allegorical Map of the Siege of the Castle of Love, 1735. Unusually for a map of love, the plan is drawn from a male perspective: the Castle of Love is the male heart, while it is the women who are shown trying to break through the male’s outer defences — Source.

John D.P. Douw's Map of Matrimony, 1827. According to a handwritten attribution, 'this map was designed by a certain John de Peyster, the descendant of an influential New York family of Dutch origin that produced several government officials and senior military officers' — Source.

Map of Matrimony on Mercators Projection, anonymous, undated but likely mid-19th century. Points of interest include ‘Isles of Jealousy’, ‘Sea of Scandal’, ‘Gulf of Flirtation’, ‘Mountains of Vanity’, ‘Port Hymen”(!) and, rather ominously, ‘Land of Lawyers’ — Source.

A Map of the Open Country of Woman's Heart, Exhibiting its internal communications, and the facilities and dangers to Travellers therein, By A Lady; Lith. of D.W. Kellog & Co, ca. 1830s — Source.

George Edward Moray's The State of Matrimony, A Map: According to the Surveys by Civil Engineer Cupid, whose familiarity with this and adjoining States entitles him to be considered a great expert, 1909 — Source (originally from Barron Maps).