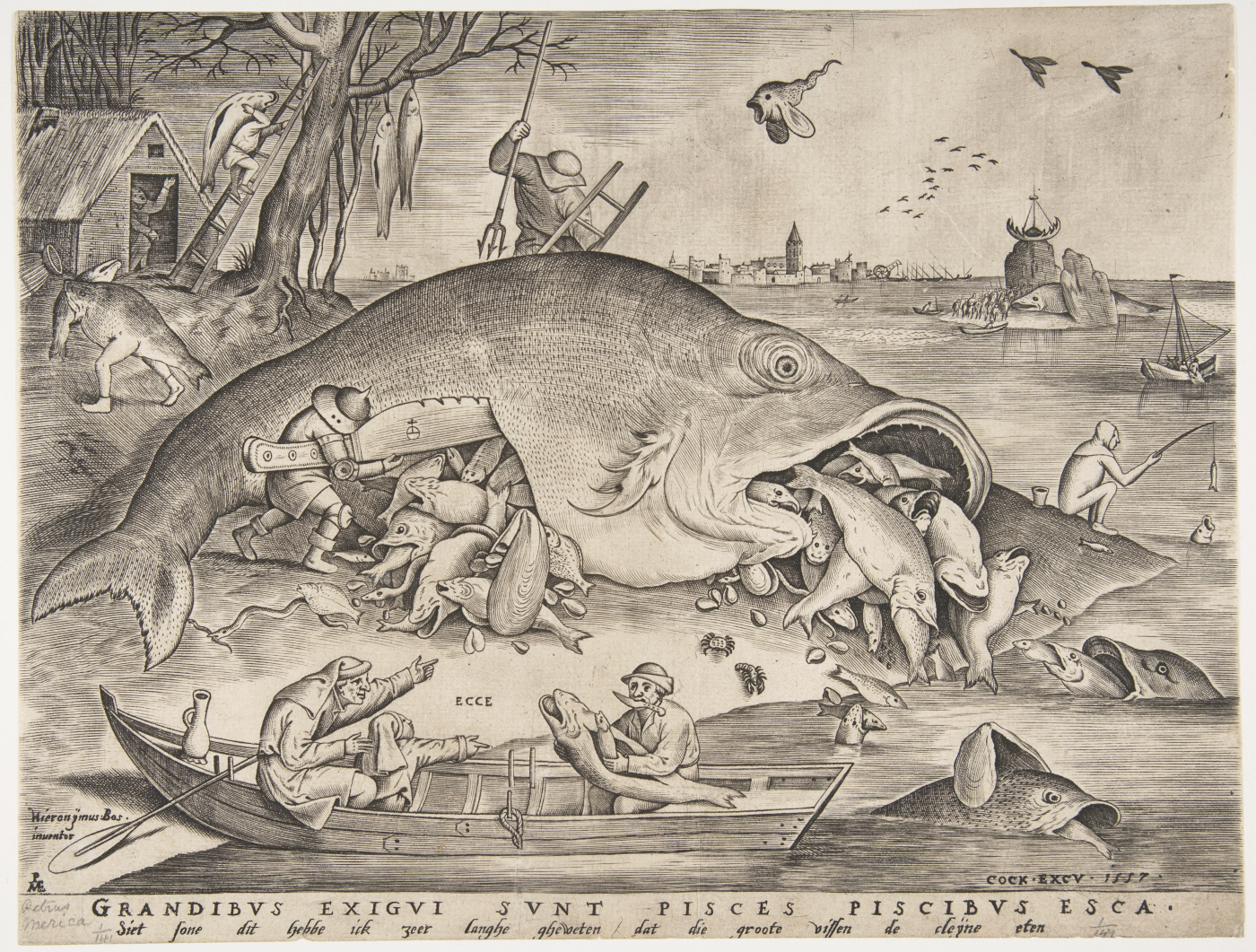 Pieter Bruegel’s Big Fish Eat Little Fish depicts a surreal, cannibalistic feeding frenzy on the waterfront: an unfortunate turn of events for a father-son fishing trip. A fearsomely large fish has been heaved upon the beach. From its gaping mouth, as well as a gash being carved in its midsection, spill forth two torrents of seemingly ravenous marine life. On land and at sea, sizable fish flounder after their inferiors, while eels chase eels, and some become meals for an assortment of predatory mollusks. The Flemish description below this scene, which appears in Pieter van der Heyden’s 1557 engraving, puts a colloquial spin on a popular proverb: “Look son, I have long known that the big fish eat the small.” And aboard their shared boat, the boy gestures to the madness in tandem with his father, their arms perfectly framing the isolated word of Latin: ecce. Behold.

Bruegel the Elder (ca. 1525–1569) produced the model for Big Fish Eat Little Fish in 1556, creating an intricately textured illustration via gray and black ink atop paper. At the same time, the business of printmaking was beginning to hit its stride throughout Europe, and became particularly popular in Bruegel’s adopted home of Antwerp. This movement towards increased print production was led in large part by Bruegel’s long-time publisher, Hieronymus Cock, whose influence likely led the Netherlandish artist to develop an interest in engravings. Bruegel’s drawn version of Big Fish Eat Little Fish is thought to have been created with the intent to guide an engraver’s hand — evidenced by the immaculate attention to depth. The water is carefully striated; the creature’s back stippled to form a soft gradation. 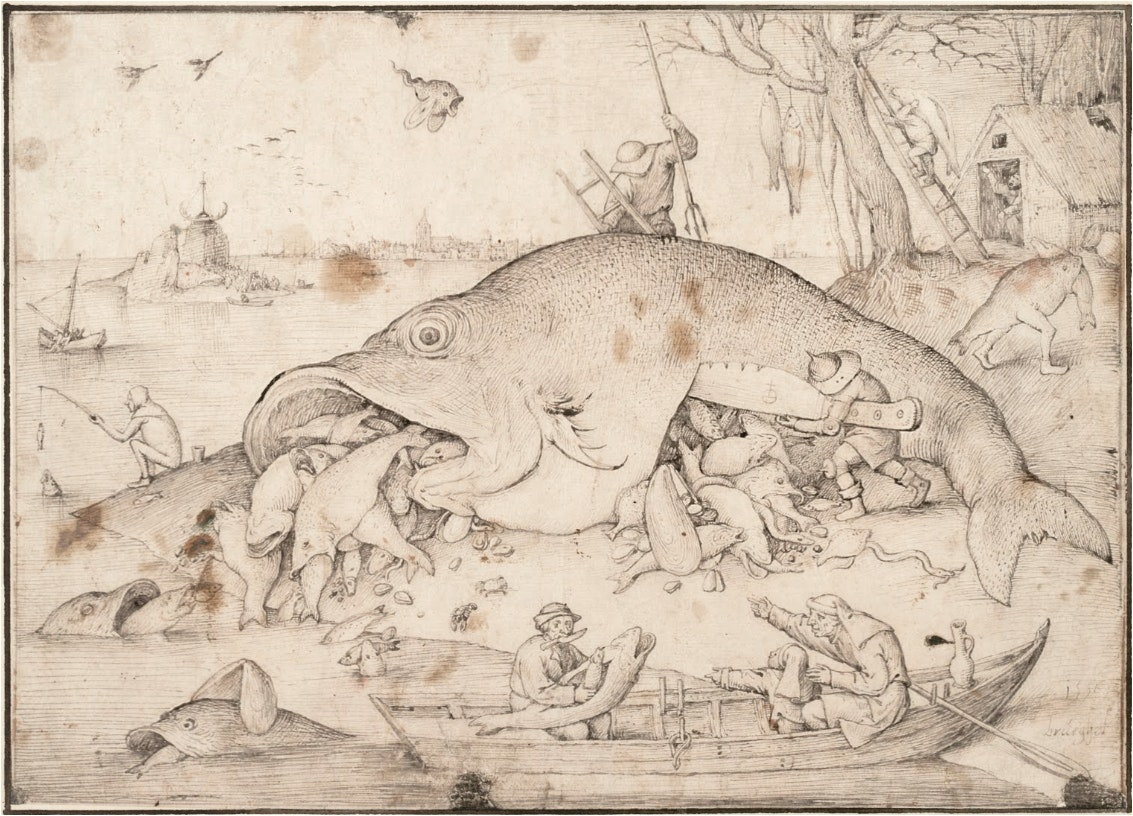 Bruegel's illustration was ultimately engraved in copper by Van der Heyden, who followed the drawing with technical prowess. Van der Heyden’s monogram can be found in the lower left-hand corner, across from the publisher mark, “Cock. EXCV. 1557”. And just above the father’s dormant oar, as though left to ornament the sand, are the words: “Hieronymus Bosch inventor”. Oddly, Bosch passed away in 1516, meaning that Cock most likely used his name for its widespread marketability, or as an homage to his obvious influence on Bruegel. The human-size fish who has suddenly sprung legs and two slippered feet, plodding away with a smaller fish in his mouth, is a clear echo of Bosch’s artistry.

The works of Bruegel often feature scenes of peasant lives, poised to represent various ancient proverbs. In his depiction of chaotic consumption through Big Fish Eat Little Fish, the lesson of large fish devouring their miniatures might relate to a general sense of injustice, the feeling that predation is innately born and instinctive. The wealthy exploit the impoverished; the powerful pummel the weak. This saying may owe its popularity to Erasmus’ Adagia, a compilation of Greek and Latin proverbs assembled in the early sixteenth-century, which includes: “Serpens ni edat serpentem, draco non fiet” (A serpent, unless it devours a serpent, will not become a dragon). Yet while Erasmus may have played a role in cementing the proverb within a popular canon, the observation of same-species predation can be traced all the way back to Aristotle’s History of the Animals. Here, Aristotle notes that, “As a general rule the larger fishes catch the smaller ones in their mouths”, and “all fishes devour their own species, with the single exception of the cestreus or mullet”. This history includes myriad descriptions of marine diets, including the hierarchy of eels and crawfish, and the carnivorous tendencies of certain mollusks, like the giant clam clamped down on a fish’s back in Bruegel’s image.

Given that Cock’s publishing company, Aux Quatre Vents, was primarily directed towards a well-educated crowd, the proverb within Big Fish Eat Little Fish would have been easily recognized and understood. In spite of this, the engraving became a source for various adaptations over time. A later version was printed by Ioan Galle in the mid-1600s, and saw the addition of several explanatory texts. Above the image sits the trilingual phrase: “The oppression of the poor. The rich suppress you with their power. Letter of James, 2:6”. Perhaps the most explicitly political adaptation, however, was released by an anonymous engraver ca. 1619, transforming the proverb into targeted critique. The artist has clearly labeled each facet of the image, most significantly tagging the enormous fish as “Barnevelsche Monster”, a reference to Johan van Oldenbarnevelt, a controversial former Chancellor of the United Provinces of the Netherlands. His body is being swiftly executed by the labeled “knife of righteousness”, a weapon wielded by Maurice of Orange, Oldenbarnevelt’s eventual political enemy. Here, the attacker’s head is tilted upwards to reveal his face, in contrast to the original engravings that left him hidden behind his hat. Each of the fish spilling out of Oldenbarnevelt’s wounded body are named as leading men of the Dutch States Party, a republican political faction which stood for provincial sovereignty. An aquatic-avian hybrid remains in flight above the satirical tableau, but now boasts two small horns. And the child’s once awe-stricken ecce is suddenly imbued with undeniable socio-political significance. What does it mean to sit back and simply “behold”? 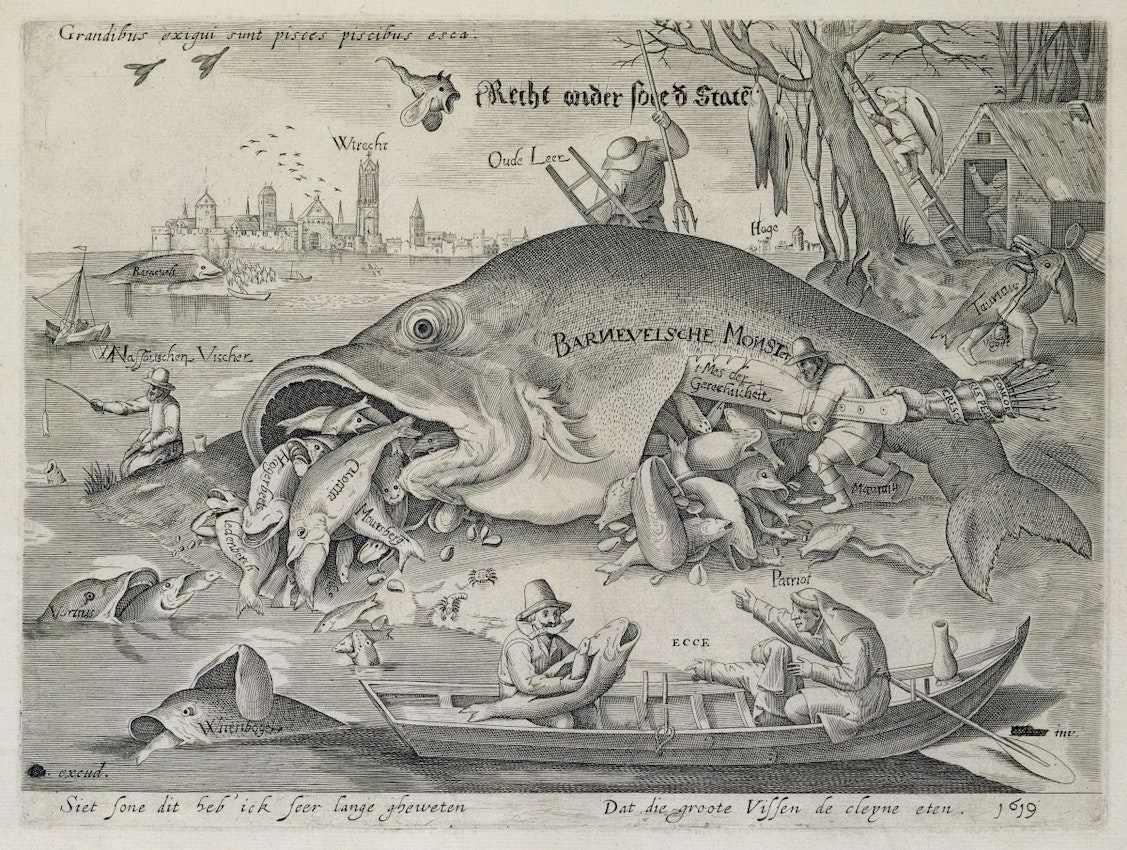