Early 20th-century Buddhist rebus-style text from Japan. Although labeled by the British Library as a Heart Sūtra for the illiterate, the Library of Congress identifies it as the “Hymn of Praise to Kannon for the Illiterate” (Kannon mekura wasan) — Source.

In the introduction to Elaborations on Emptiness (1996), Donald S. Lopez, Jr. recounts a Japanese story called “Miminashi Hōichi”, about a blind biwa minstrel who can recite the epic thirteenth-century Tale of Heike by heart (a chronicle that exceeds eight hundred pages in its English translation). One day, the young man is approached by the servant of a lord, who asks to hear the concluding episode performed, wherein the last samurai of the Heike bloodline is executed — a segment alone that requires seven nights of recitation. His first six installments are a great success. But before the final session, it is discovered that the blind singer was tricked: he has not been visiting a noble temple in the evenings, as he thought, but an empty graveyard, where the ghosts of the Heike clan have been listening to the painful history of their demise. Like Scheherazade from One Thousand and One Nights, who must tell stories to stay alive, the boy realizes that when his tale ends, he too will die. To save him, local monks paint the Buddhist Heart Sūtra across his body, which makes him invisible to the ghosts. But the monks forget to calligraph his ears. That night, the spectral samurai slice his lobes to shreds, leaving only holes, and thus the blind bard became known as Miminashi Hōichi — Hōichi the Earless.

It is hard to find a moral in this stomach-churning scene. Yet it reflects a belief regarding the Sūtras and other texts of Mahāyāna Buddhism: what these words mean may be just as important as what they can do: offer protection, through apotropaic invocation, and grant enlightenment. “It was agreed among many Buddhist scholars”, writes Claudia Marra in reference to Japanese Buddhism, “that Sūtras, even if not understood, but recited with faith, would eventually lead to enlightenment, since only the language of the Sūtras had the power to cut through illusions and enlighten the faithful”. The bloody climax of “Miminashi Hōichi”, then, may reflect — in graphic and physicalized terms — not only the armoring power of sacred language, but also the Heart Sūtra’s primary theme: cutting through the illusory nature of perception and knowledge itself.

If incantatory texts of Mahāyāna Buddhism work through recitation, are the illiterate barred from enlightenment, should they lack the supreme linguistic recall of Hōichi? The answer requires knowing more about literacy and language in Japan. The stakes of correct recitation were high in the pre- and early-modern era, with strict rules for pronunciation existing since the 1100s, and sutra recitation (dokyō) becoming an artform in the following century. Charlotte Eubanks tells the story of Emperor Goshirakawa, who supposedly incinerated a wing of the imperial palace after mispronouncing “a single character of the Lotus Sutra”.

This is to say, even for the literate, the Buddhist scriptures could be vast palimpsests of code-switches and calques. First of all, most East Asian canons of sacred Buddhist texts — known as Tripitaka and venerated by practitioners in Korea, Vietnam, and Japan — have long been written in Classical Chinese. As Greg Wilkinson notes, for those who can read this Tripitaka, the canon’s lack of punctuation, the tonal requirements of Chinese, and the presence of Sanskrit transliteration, makes it “very difficult to understand for a Japanese reader without special knowledge and training”, and almost as difficult to pronounce “correctly”, given the variation in dialects and vernacular speech across the archipelago.

In order to circumvent these issues in the seventeenth century, Japanese printers began creating a type of book for the illiterate, allowing them to recite sutras and other devotional prayers, without knowledge of any written language. The texts work by a rebus principle (known as hanjimono), where each drawn image, when named aloud, sounds out a Chinese syllable, akin to how the emoji sequence 👁 🅰️ ◀️ 🚍 approximates the phonetics of “I read a rebus” (I + “red A” + “re” + “bus”). Famously, the Japanese physician, scholar, and travel writer Tachibana Nankei (1753–1805) reproduced an early example of a Heart Sūtra for the illiterate in his 1795 Travelogue of East and West (Tōzai yūki). 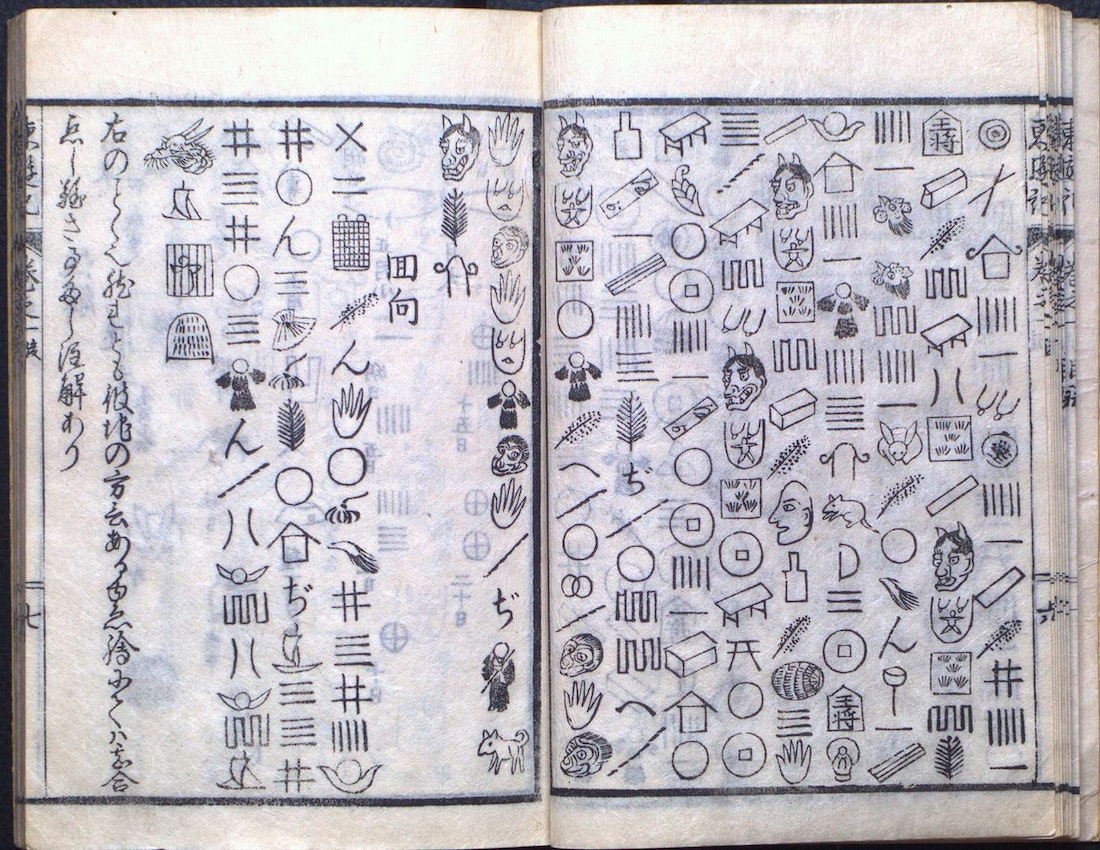 As these texts were often most used in rural, agricultural regions, the chosen pictograms reflected the lived experience of their “readers”: the implements of work and rice farming (sieves, saws, paddies); domestic animals (from rats to monkeys); and imagery related to fertility, pregnancy, disease, and death. “Villagers, decoding these pictures and pronouncing them aloud in their local dialect”, writes Eubanks, “would thus produce sounds similar to those pronounced by educated clerics”. Furthermore, the presumed incantatory and magical power of an esoteric teaching, in a nearly incomprehensible language, coupled the sounds and promises of spirituality to the visual realm of everyday life.

The rebus-style text featured at the very top of this post, held by the British Library, dates to the early twentieth century, demonstrating the continued relevance of this reading technology across a modernizing Japan. It is labeled by the British Library as an edition of the Heart Sūtra (Hannya shingyō), but the Library of Congress, which holds a copy of the same text, names it as the “Hymn of Praise to Kannon for the Illiterate” (Kannon mekura wasan). Although the bodhisattva Kannon (Avalokiteśvara), who embodies compassion, offers teachings in the Heart Sūtra, this hymn (wasan) is distinct from the Heart Sūtra as well as the other sutras rendered according to this rebus-principle, such as the Lotus Sūtra.

Below, you can browse pages from a much earlier Heart Sūtra for the illiterate (ca. 1800), courtesy of Williams College. Also, on the theme of religious rebus texts, check out this 1908 pictographic bible designed for children.