Comparative Physiognomy: or, Resemblances Between Men and Animals (1852)

Physiognomy — the judging of a person's character based on their appearance, especially the face — has a long tradition, but it gained particular popularity as an idea in the 19th century. This book by the U.S. physician James W. Redfield is a classic of the genre. As the title gives away, the book is concerned with comparing animals with human faces, in particular those belonging to various nations and ethnic groups. A quick glance at the content page gives a sense of the endeavour. 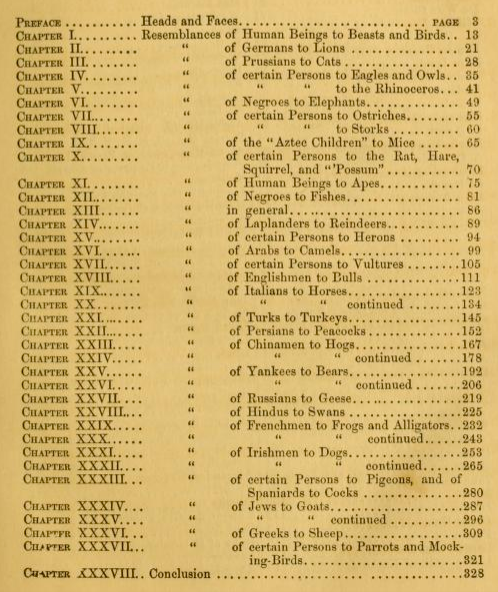 The nature of the specific pairings tell their own story of the racist inclinations simmering below the surface. The Germans, "Yankees", and British land a trio of animals associated with strength: lions, bears, and bulls respectively. Others are not so fortunate. It perhaps goes without saying that such a theory hasn't really stood the test of time, but it is a fascinating glimpse into an idea which had — within the context of the colonising projects, rife at the time, of various imperial powers — far reaching consequences.