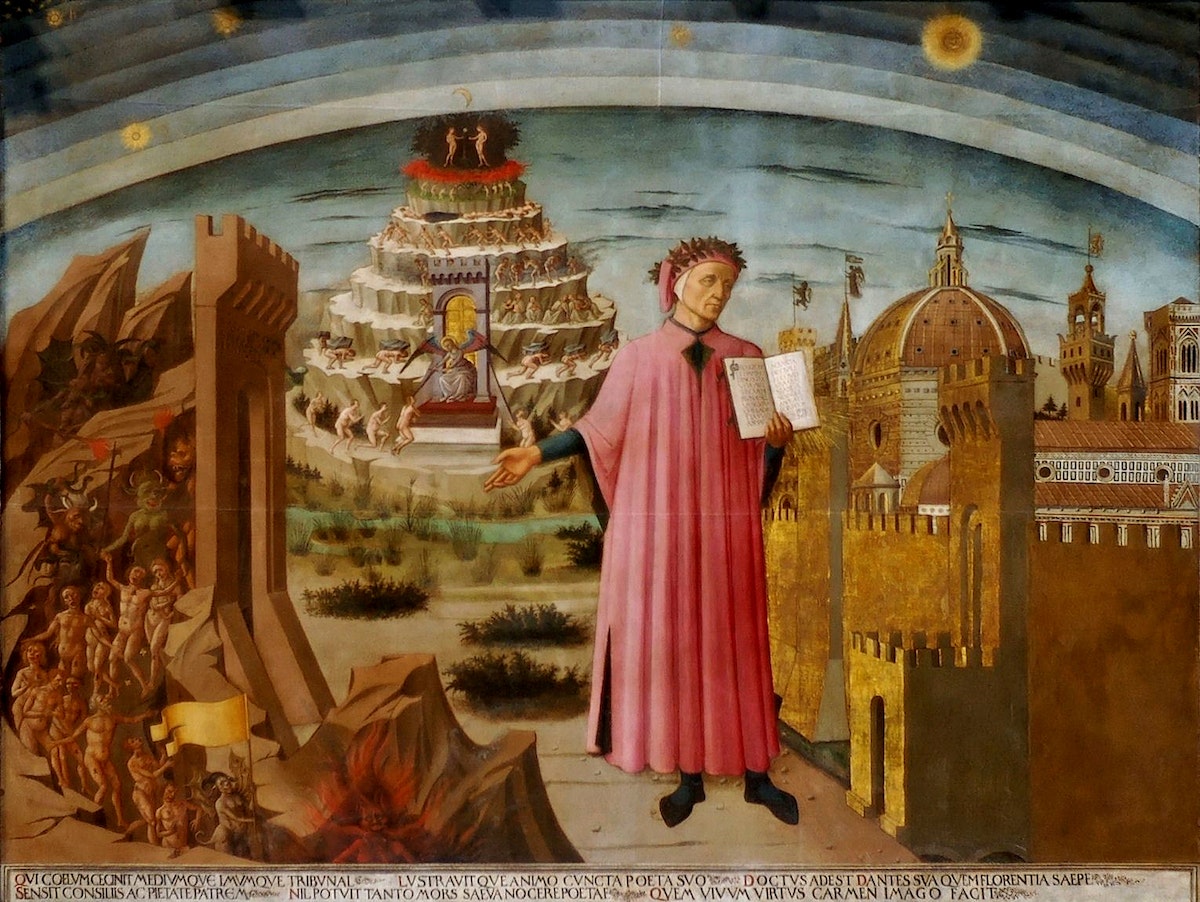 A man wakes deep in the woods, halfway through life. Far from home, unpermitted to return, his heart pierced by grief. He has strayed from the path. It's a dark night of the soul, his crisis so great that death becomes a tempting end. And then, as wild beasts advance upon this easy prey, his prayers are answered. A guide appears, promising to show him the way toward paradise. . .

Today marks the seventh centenary of Dante Alighieri's death, the Florentine poet who wrote The Divine Comedy, arguably our most ambitious Western epic. Eschewing Latin, the medieval currency of literature and scholarship, Dante wrote in his vernacular tongue, establishing the foundations for a standardized Italian language, and, by doing so, may have laid cultural groundwork for the unification of Italy.

The poet's impact on literature cannot be overstated. "Dante's influence was massive", writes Erich Auerbach, "he singlehandedly established the expressive possibilities and the landscape of all poetry to come, and he did so virtually out of thin air". And just as the classical Virgil served as Dante's guide through the Inferno, Dante became a kind of Virgil for later writers. Chaucer cribbed his rhythm and images, while Milton's Paradise Lost may have been actually lost, were it not for Dante as a shepherd. The Divina Commedia is a touchstone for works as diverse as fifteenth-century Castilian and Catalan verse; Gogol's Dead Souls (1842); and Mary Shelley's Italian Rambles (1844), which finds the poet at every turn:

There is scarcely a spot in Tuscany, and those parts of the North of Italy, which he visited, that Dante has not described in poetry that brings the very spot before your eyes, adorned with graces missed by the prosaic eye, and which are exact and in perfect harmony with the scene.

If Dante's poetry summons landscapes before its reader's eyes, artists have tried, for the last seven hundred years, to achieve another kind of evocation: rendering the Commedia in precise images, evocative patterns, and dazzling color. By Jean-Pierre Barricelli's estimate, a complete catalogue of Commedia-inspired artworks would exceed 1,100 names. The earliest dated image comes from Florence in 1337, beginning the tradition soon after the poet's death in 1321. Before long, there were scores of other illustrations. As Rachel Owen notes, due to medieval guild production, early illustrations of the Commedia featured highly collaborative work, where a single miniature could pass through multiple hands, introducing variation in style across a single manuscript, but also conventions of representation.

Spanning the Late Middle Ages, Renaissance, and the rise and fall of Romanticism, the images gathered below reflect changing techniques for rendering perspective and summoning humanist pathos. While this evolution might be expected, the consistency with which artists have chosen specific Cantos from the Commedia is almost uncanny. And there are surprising gaps, as well — a dearth of Dantean images during the seventeenth and eighteenth centuries, perhaps in line with Goethe's quip, ca. 1824, that the Italian poet would soon be lost to obscurity. Nothing like this happened, however, for the mid-nineteenth century saw Dante's works become a popular subject for visual artists once again. 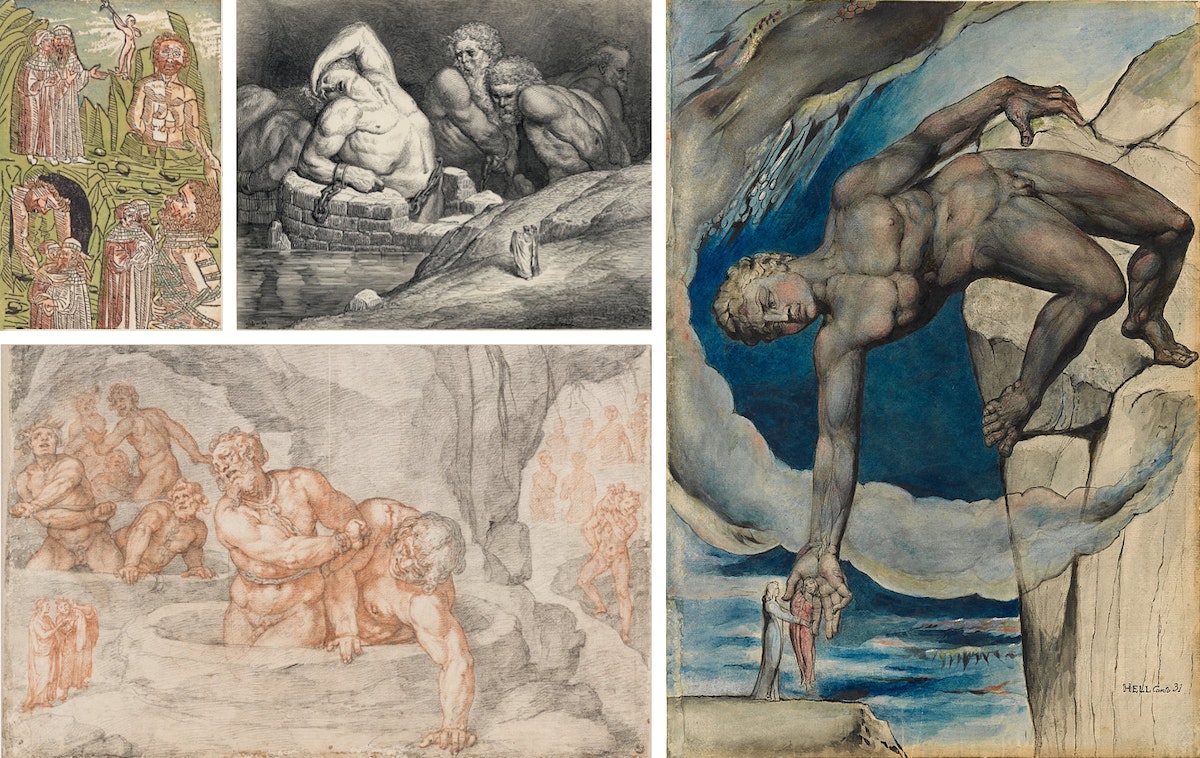 There are many reasons as to why the Commedia lends itself to depiction, the most simple being: there is so much to draw upon. Titans chained deep in hell; Ugolino pausing, mid-cannibalistic chomp, to converse with Dante and Virgil; the ecstatic ascent to the Empyrean; and other, seemingly endless configurations of the abject and miraculous.

The three-headed Satan has always been popular, frozen in the ninth circle of hell's last ring. In one of the earliest extant renderings, a Florentine illustration from ca. 1350, each head of the devil masticates Brutus, Judas, and Cassius: the ultimate traitors, whose treachery was itself a form of consumption: dismembering the Roman Republic and the son of God. An Early Renaissance engraving after Botticelli, but also credited to Orcagna, places Satan amid dozens of hellfiends, torturing various tormentees with saws, tridents, and snakes — gathering the evils that Dante has witnessed in previous circles. Francesco Scaramuzza returned to the same figure in the mid-nineteenth century, adding a thick layer of fur and soul piercing eyes.

To get out of the Inferno, Dante and Virgil must climb up the torso of Satan, emerging near the base of Purgatory. The mountain of salvation was formed by displacement: the impact of this angel crashing to earth. This is but one of the many careful harmonies built into the Commedia's totalizing vision. The epic's structure is almost fractal: three lines per stanza; thirty-three cantos per section; and three poetic movements (Inferno, Purgatorio, Paradiso), each respectively composed of nine circles, stages, and spheres. While this structure emerges gradually in the poem, artists have long tried to plot its coordinates. Placing Botticelli's well-known, external vision of the Inferno next to a bird's-eye view of Purgatory from 1568 reveals the symmetry between the first two sections of Dante's epic.

Others opt for a more abstracted approach. A 1518 diagram renders hell as a bounded, two-dimensional mineshaft, while in a series of maps from 1855, Michelangelo Caetani makes the funnel-like Malebolge resemble a honeycombed monolith, buried beneath layered earth.

In Paradise, Dante is guided by his beloved Beatrice, who leads him toward the beatific vision. During Cantos 18–20, which take place in the sphere of Jupiter,  they come across the Eagle of Justice, composed of myriad souls. An early Italian miniature (ca. 1450), shows the couple floating against an ultramarine background in conversation with the eagle's more-than-fifty faces. In a late-sixteenth century illustration by an unknown artist, the eagle's souls take on the eerie aspect of skulls. Francesco Scaramuzza adds a Romantic touch, where Dante soars, eyes closed by sublimity, carried on the raptor's talons. 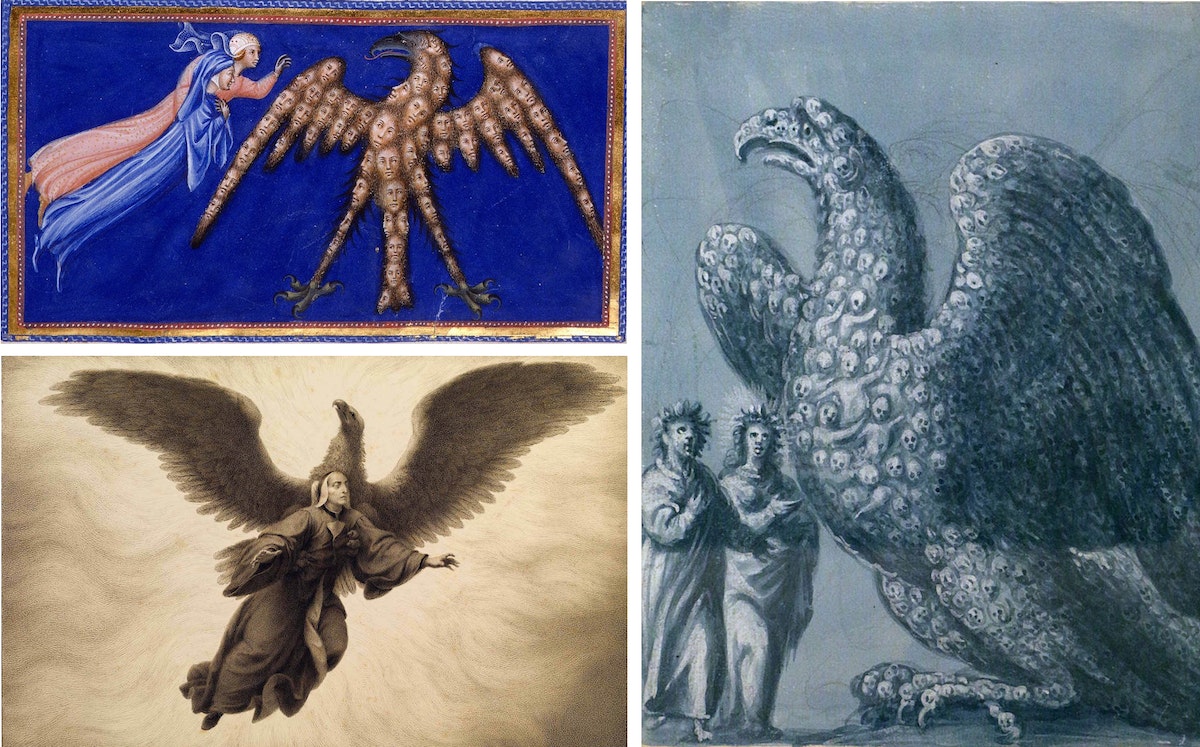 The beatific vision, depicted both by a mid-sixteenth century woodcut and Gustave Doré (1880), capture, in juxtaposition, something of paradise's unchanging promise. The former, mandala-like arrangement positions angels in nine rings around God, while Doré — whose illustrations were so immediately influential that one critic, writing in 1861, felt that Dante and Doré were "communicating by occult and solemn conversations" — puts a blinding light in place of the divine. 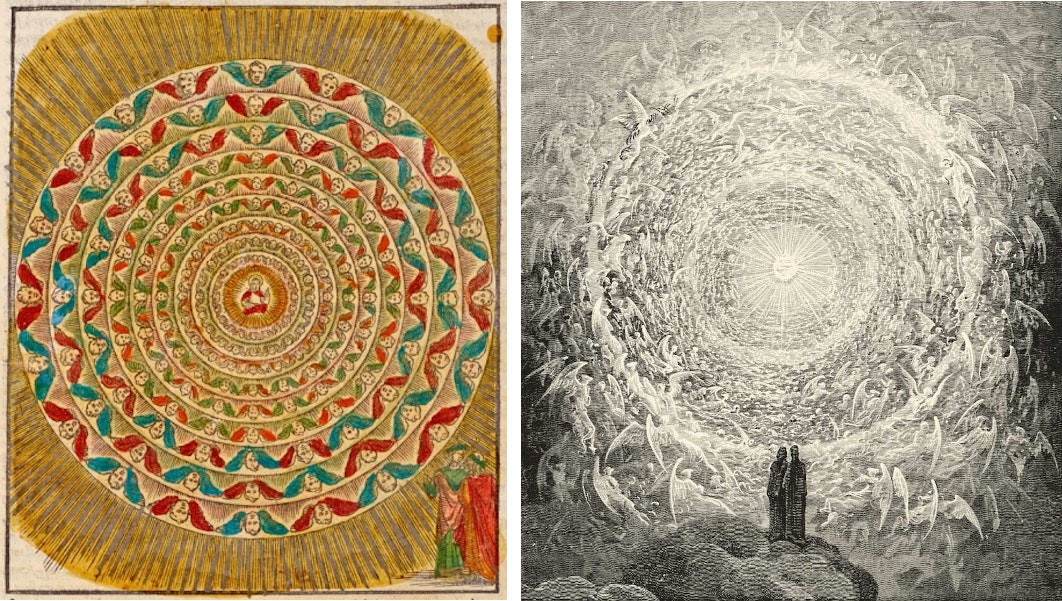 As hinted at by the central couple in Doré's image, the Commedia ends with an affirmation of love, at once personal, galactic, and divine. “The love that moves the other stars“ (l'amor che move il sole e l'altre stelle). As Giuseppe Mazzotta notes, Inferno and Purgatorio also end with stelle. "So when Dante says that love moves the sun and other stars, what he's really doing is placing himself immediately right back on earth, back at the beginning of his quest. He's here with us looking up at the stars." And we are here with him, as artists have been for centuries, tracing out our own paths through his heavenly designs.

To commemorate the 700th anniversary of the poet's death, we have collected, below, visions of the Commedia from the last seven centuries. Each image is linked through to its source where you can often view more images in a series. And to dive further into Dante's work we highly recommend checking out Columbia University's Digital Dante project.

Inferno, Canto XXXIV: Dante and Virgil observe Satan swallowing his victims, with the souls of those who betrayed their benefactors, including Brutus and Judas Iscariot, frozen in ice below (Add MS 19587, f. 58r), ca. 1370. – Source

Inferno, Canto VII: Dante and Virgil are in a barren wood, with the harpies perched on top of thorny trees, representing the souls of suicides; hounds tear the body of the profligate Giacomo di Sant' Andrea to pieces (left); Virgil breaks off a twig and the wounded tree drips blood (center); the other profligate, Lano di Siena, runs away from the hounds (Add MS 19587, f. 21r), ca. 1370. – Source

Domenico di Michelino, La Divina Commedia di Dante, 1465. Dante holding his poem open, outside of Florence (right), from where he was exiled. The damned descend to hell (left), while, on the mountain of purgatory (back), pennants circle below the garden of Adam and Eve. Above, the heavens, as concentric spheres. – Source

Johannes Stradanus, illustration for Inferno, Canto VIII, 1587. On the boat of Phlegyas, accosted by Filippo Argenti, who rises out of the river Styx. – Source

John Flaxman, illustration for Inferno, Canto XX, 1793. The stricken spirits who cannot lift their bodies from the ground. – Source

Gustave Doré, illustration to Paradiso, Canto XXXI, 1880. The rose of saints and angels in the empyrean. – Source