100 years ago today, on 6th February 1918, the Austrian painter Gustav Klimt passed away in Vienna after having suffered a stroke and pneumonia, one of the many millions of victims of the worldwide influenza epidemic that year. He left a rich body of artistic output that established him as one of the most prominent members of the Vienna Secession movement, and, today, as among the most well known artists in the history of art. His better known works hail from what is known as his "golden phase" — which saw him finally win favour with the critics (and also his bank manager). The period was so-called because of Klimt's frequent use in these years of gold-leaf in his compositions: and of these works perhaps none is more famous than The Kiss. Painted between 1907 and 1908, upon a perfectly square canvas (180 × 180 cm), the work depicts a couple locked in intimate embrace, their clothes and surrounding landscape exquisitely rendered in two dimensional pattern: the man in a smock of rectilinear shapes, the woman in a dress of softer floral forms, behind them a swathe of textured gold, and beneath a bed of colourful flowers. To celebrate the centenary of his death, we give to you a selection of close-ups from the painting. 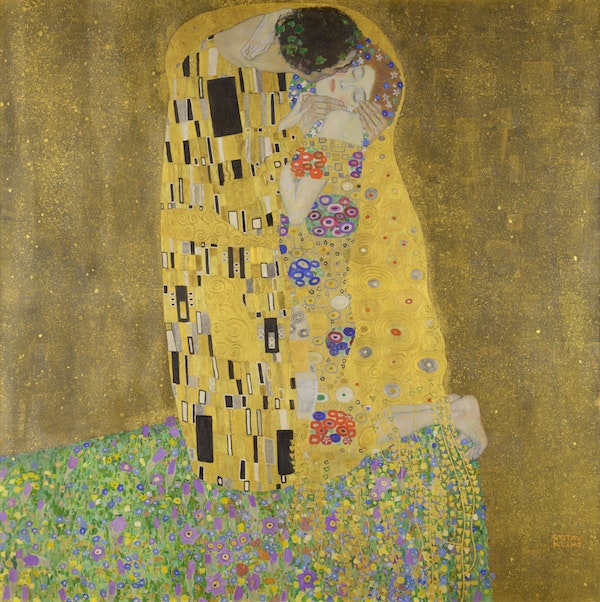