Arthur Wesley Dow, Composition: A Series of Exercises in Art Structure for the Use of Students and Teachers, 6th ed. (New York: The Baker and Taylor Company, 1905).

Widely celebrated by art historians as the first design text of the American Arts & Crafts movement, Arthur Wesley Dow’s Composition: A Series of Exercises Selected From a New System of Art Education revolutionized the American classroom. When Dow’s program for liberating individual artistic “Power” (his term for self-expression) came along in 1899, arts education was still locked into the academic tradition of copying the masters. Dow gave primary, secondary school, and even university teachers a visual grammar, a pattern language toolbox that could be used to make every aesthetic decision: right down to the decoration of their studios or the parlors in their homes. Composition’s presentation of visual art as an analytic and constructive — rather than imitative — activity was the first tangible breath of abstraction to reach the American classroom. And, for more than half a century, it was hailed by artists and art instructors alike as offering a system to create freely constructed images on the basis of harmonic relations between lines, colors, and patterns.

Dow’s pedagogical mastery had humble Yankee roots; as an eighteen-year-old high school graduate in 1875, he taught farm children and teenagers in a one-room schoolhouse in a remote corner of Ipswich, Massachusetts. About this same time, Dow took up sketching as a complement to his pioneering antiquarian research in Ipswich’s town records, and then, finding inadequate the heliotype productions of his own hands and those of Boston printers, he began to practice wood engraving and lithography, always with a craftsman’s rigor. (He once spent an entire day hand-grinding a carpenter’s awl into an engraving tool for his first experiments with carving local pear wood.) Absent from the early editions of Composition, some of these experiments appear in the greatly expanded 1913 edition, which also includes color plates. 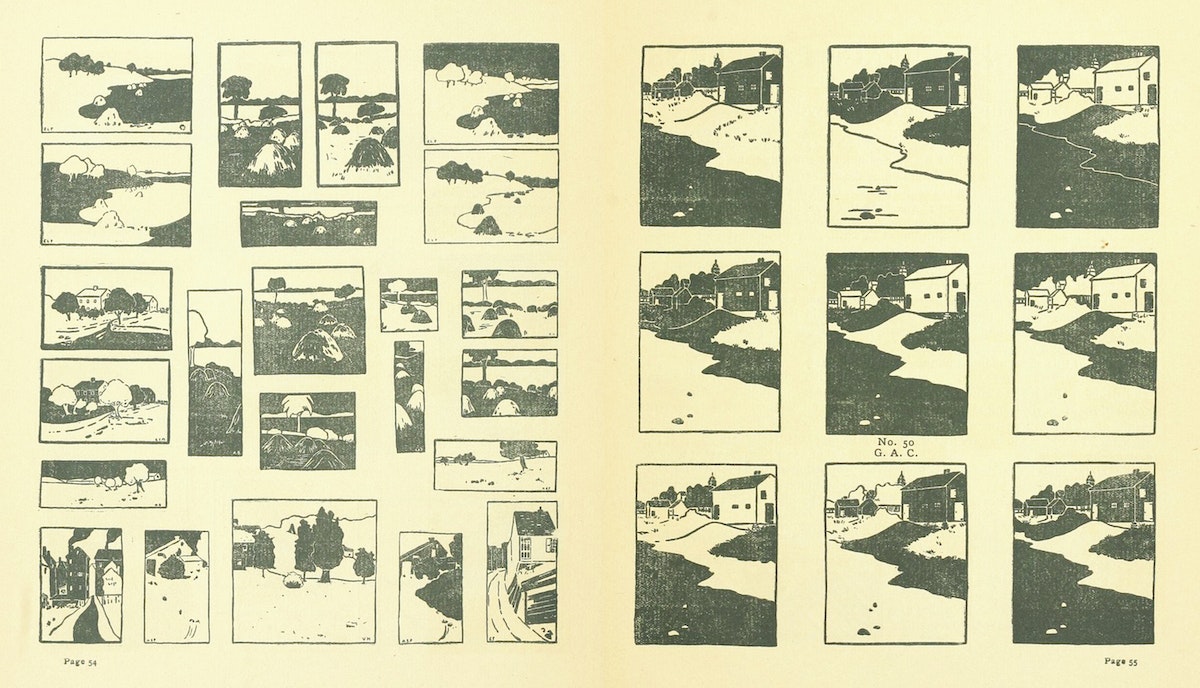 Examples from the "Dark-and-Light Composition" chapter in Dow's 1905 edition of Composition — Source.

Printed in green-gray ink, the 1905 edition beautifully conveys Dow’s central principle of “Notan” — a neologism adopted from Ernest Fenellosa, the influential art historian and Boston Museum of Fine Arts curator of Oriental Art, who combined the Japanese words for “light” and “dark” to describe the play and placement of contrast, without the distraction of other elements like color, texture, and fine details. Drawing on Dow’s experiences with students at both Brooklyn’s Pratt Institute (1896–1903) and his own Ipswich Summer School of Art (founded in 1890), Composition was unique in its inclusion of student work right alongside that of Renaissance and Japanese masters.

While scholars unanimously attribute Dow’s artistic embrace and pedagogical promotion of ukiyo-e — the “pictures of the floating world” depicted in Japanese woodblock prints — to his encounter in early 1891 with Fenellosa, Dow had for a dozen years been cultivating a wholly original program of minimalist abstraction that grew organically out of his love for Ipswich’s unparalleled riparian landscape. When he declared that “one evening with Hokusai gave me more light on composition and decorative effect than years of study of pictures”, it was due to a lifetime of haunting the marshy borders of the Ipswich River, Labor in Vain Creek, and Thatch Bank, which led Dow into mysticism, nurtured by his reading of Whitman and Thoreau as well as the Quietist tracts of French mystic Madame Guyon. 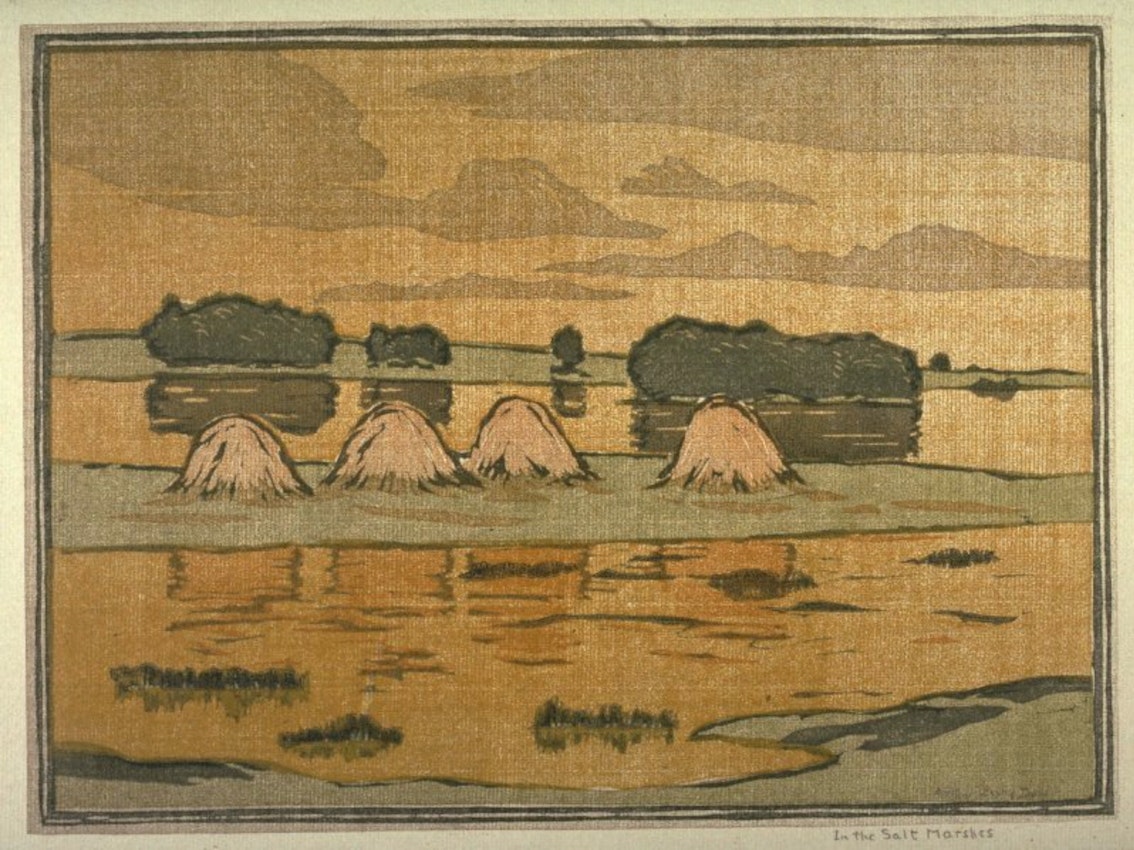 Copying the inscriptions on seventeenth-century tombstones in Ipswich’s burying grounds, Dow appreciated how the blue, green, purple, and even pink-tinted slate gravestones harmonized with the hues of this region. His preference for the bluish haze of cyanotypes (a collection of 264 of which are viewable here) over photography was of a piece with his aversion to the stark white marble of modern headstones, which he called “coldly out of place by the side of the mossy green and purple slates of the first settlers, partaking of the colors of ground and sky”.

The woodblock stamp on Composition’s title page — which imaged the low drumlin Eagle Hill fairly floating in the midst of the “Silver Dragon”, Dow’s name for a meandering tributary of the Ipswich River — bears the Greek letters for synthesis. Dow’s emblem proclaimed not just the synthesis of East and West, but of one’s inner landscape with outer Nature, which for this native of an inland reach of Plum Island Sound’s tidal estuary, was a floating world of dories, gundalows, hardwood copses, salt hay ricks, and billowing cumulus clouds rolling in from the Atlantic.