These folk stories have been told to me by natives of the various countries to which they relate in the Ikom district of Southern Nigeria. In all cases they have had to be translated by an interpreter, and frequently it has been found necessary to employ two. Some of the stories are very old and have been handed down from one generation to another, but it is most difficult, almost impossible, to judge with any degree of accuracy how old they really are.

During his spell as District Commissioner in the period preceding 1914, when the British pulled together the north and south of Nigeria into one colony, Dayrell pursued his interest in the culture, history, and folktales of the Igbo people of the south-eastern regions, near the Niger Delta. It was the Igbo (the children and grandchildren of those interviewed by Dayrell), who suffered a genocide of an estimated 1 to 3 million people during the Nigerian Civil War of the late 1960s — a war with its bloody roots firmly planted in the 1914 amalgamation enforced by Dayrell and his fellow colonialists.

The tales in Ikom Folk Stories were gathered during 1910 and 1911, from a range of informants, each of whom Dayrell credits. There is a photograph of “Chief Indoma of Inkum, son of the powerful Chief Indoma, about whom several of the stories are told”, including one “Concerning the Human Sacrifices which took place” on his death. 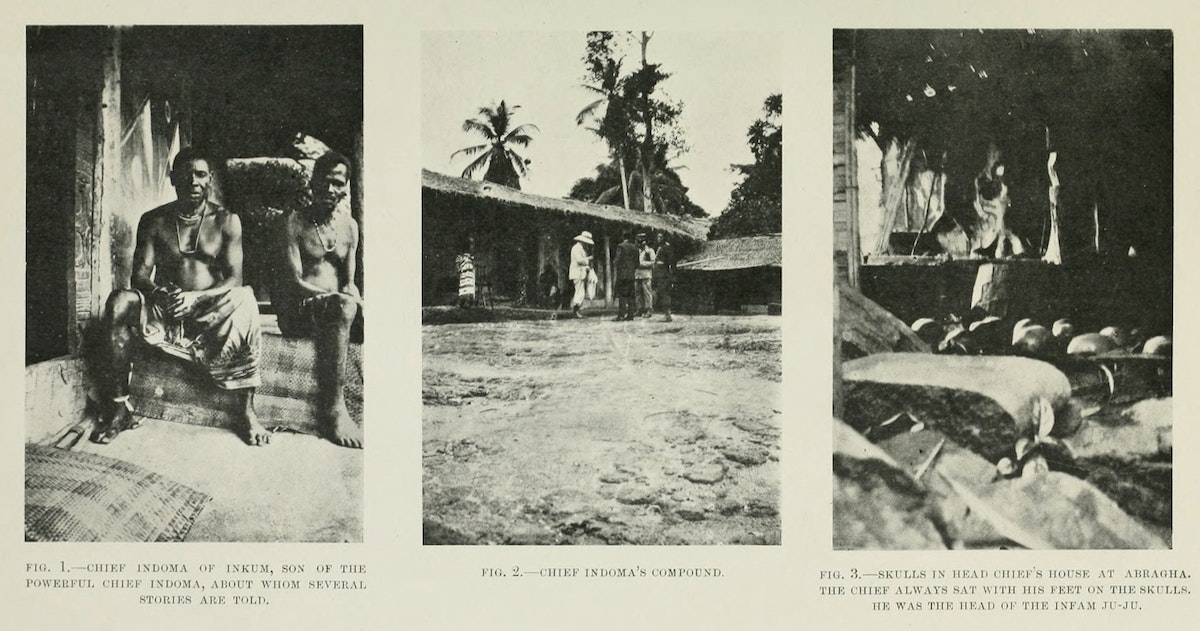 Dayrell also adds notes which explain local detail, or which place events in historical context. Of “The Cunning Hare”, he explains, “This is one of their old stories, which they brought with them when they were driven south by the Awala tribe, and is still handed on from one generation to another.”

The stories mix this historical record with creation myths and animal fables. We are told of Inkang, who brought up a mushroom baby boy; of dispute between the spider and the grasshopper; of a heroic tortoise. There is even one, final tale from the singing and dancing girl Ennenni, on the topic of the first meeting between the penis and the vagina, that Dayrell considers so “unfit for publication” that he presents it in Latin.

The inclusion of such an X-rated story, albeit obscured under the veil of Latin, in addition to the emphasis given to identifying the storytellers and the more immediate history of the Ikom region, speaks of the context within which Dayrell’s volume was published — part of a series of “Occasional Papers” put out by the Royal Anthropological Society. Three years earlier Dayrell published a much more commercially-minded collection, Folk Stories from Southern Nigeria, West Africa (1910), which eschews the anthropological and historical detail for a focus on more straight-up creation myths such as “Why the Sun and the Moon live in the Sky” and animal explanatory fables, like “Why the Flies Bother the Cows”. The stories included extend to the supernatural, such as in “The Disobedient Daughter who Married a Skull”, but they still retain a down-to-earth practicality, as in “Of the Pretty Stranger who Killed the King”, which offers the moral, “Never marry a stranger, no matter how pretty she may be”. The collection boasts an introduction by the Scottish folklore expert Andrew Lang, whose literary interests ranged over myth, history, religion, and psychical research. While Lang’s political interpretation of the British influence on Nigeria shows his era, he does make an interesting point about the relation of these tales to other traditions, comparing and contrasting with elements from Greek mythology, Zulu stories, French chanson, Celtic legend and many others.