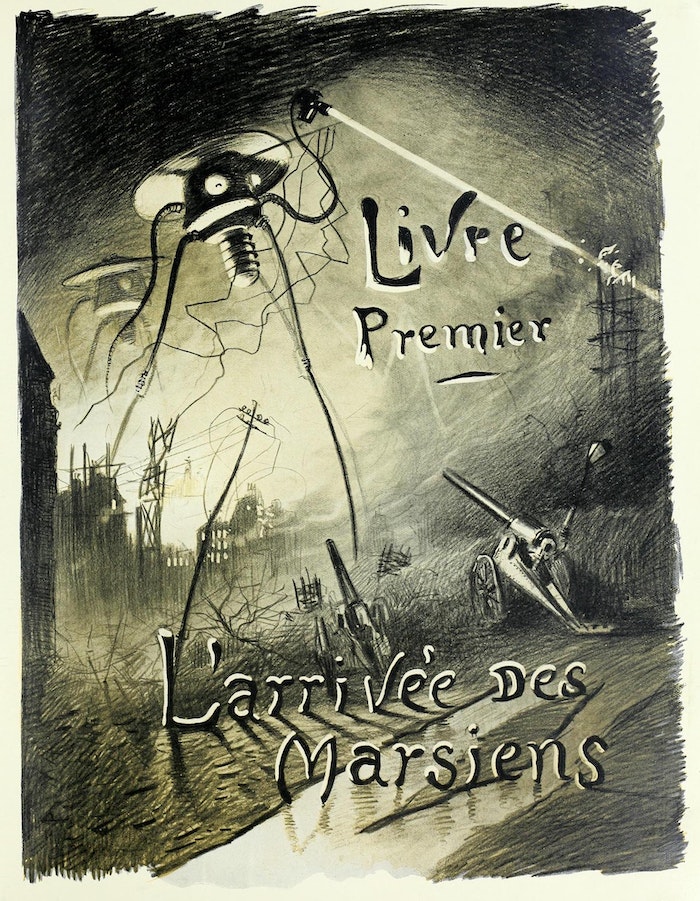 H. G. Wells’ The War of the Worlds was first published in 1897 with illustrations by the British artist Warwick Goble. These were inky, black-and-white depictions of Wells’ story of a Martian invasion — eerie, imaginative, exciting, and thoroughly of their late Victorian time.

Three years later, The War of the Worlds was published in French, translated by Henry-D. Davray (1873–1944), an accomplished litterateur who specialized in the work of Wells, Kipling, Wilde, and Yeats. The translation was reprinted several times in the following years, but not issued with illustrations until 1906, when the Brazilian artist Henrique Alvim Corrêa took on the task.

Not a great deal is known about Corrêa, who died of tuberculosis at age thirty-four, only a few years after the illustrations featured here were published. According to The History Blog, Corrêa was born into a well-to-do Rio de Janeiro family. His father was a lawyer (who died when Corrêa was seven), his stepfather was a banker who moved the family first to Lisbon in 1892, and then to Paris in 1893. Here, Corrêa studied under the military painter Édouard Detaille and exhibited paintings of military scenes in the Paris Salons of 1896 and 1897. Then, in 1898, Corrêa eloped with Blanche Fernande Barbant, the daughter of Charles Barbant (who illustrated Jules Verne and engraved the drawings of Gustave Doré). Cut off by his family, living in Brussels, and with a newborn baby to feed, Corrêa was for a while willing to do whatever work came along, whether it was designing advertisements or painting houses. By 1900, however, he was financially successful enough to have opened a studio.

During the first decade of the twentieth century, as The History Blog puts it, Corrêa “developed a style of strong contrasts and dynamic movement in both drawing and painting,” returning again and again to themes of “eroticism and violence individually and in combination”. Reading The War of the Worlds in 1903, Corrêa saw a work perfectly suited to his talents and obsessions. He did several illustrations of the book “on spec” and traveled to London to show them to Wells, who was apparently so impressed he invited him to illustrate the new Belgian edition of Davray’s translation. “Alvim Corrêa”, Wells said after the artist had died, “did more for my work with his brush than I with my pen”.

One can see the reason for Wells’ enthusiasm. Every one of Corrêa’s illustrations bursts with imagination, eliciting fascination and terror. The post-apocalyptic landscape introducing Book One, “The Arrival of the Martians” — with its extraterrestrial tripods (looking like a cross between octopuses and water towers) and its impressive depth of field — presages not only the surrealist style of painting then brewing in Paris but the Hollywood sci-fi movies of the 1950s, with their campy mix of silliness and horror.

The image of a blurry woman, erotically posed, being attacked by a Martians’ tentacles — which introduces Chapter Two — may contain a reference to Hokusai’s The Dream of the Fisherman’s Wife, but certainly it also represents a central motif in Corrêa’s art. (The only other major work he completed before his death in 1910 was a series of drawings called Visions Érotiques done under the pseudonym Henri Lemort, i.e. Henry the Dead Man.)

There is something visceral about almost all of Corrêa’s images. The first sighting of a Martian crawling from its ship is unsettling, perhaps because the postures of the man and the emergence of the creature are so ordinary — it could be a picture of someone recoiling at the appearance of a snake or spider. The illustration of the Martians first training their fiery death beam at a group of humans may be familiar to us from a thousand comic books, but it also conjures visions of the very real Great War to come.

You can see all of Corrêa’s illustrations below — including London houses with eyes in the windows and a flooded city street loomed over by a Martian ship.