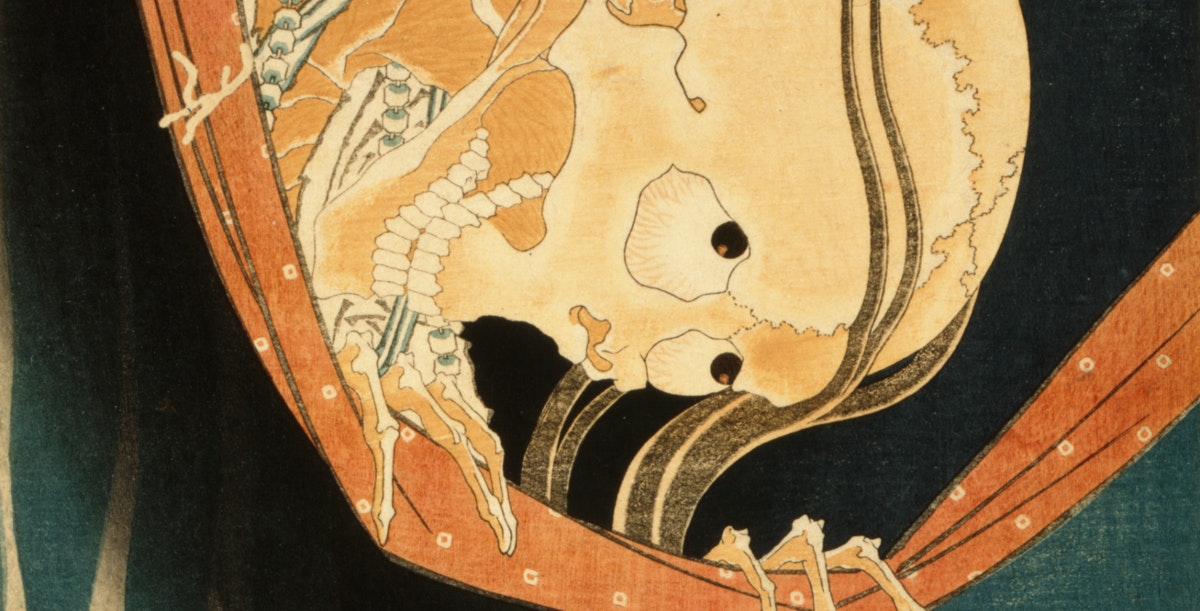 Katsushika Hokusai’s wood block print of a gigantic wave frothing before Mount Fuji, which he made in his seventies, is so beloved and influential that the scholar Christine Guth has devoted a whole book to it. Less attention has been paid to the beguiling illustrations he crafted, also while in his seventies, for the series Hyaku Monogatari [One Hundred Ghost Stories] (ca. 1830). We aren’t sure why the project never reached its probable goal of a century of pictures but the five that were completed are a dark delight. In the prints Hokusai directs his attention away from the Japanese landscapes he was most famous for depicting, inwards towards a realm of vengeful ghosts and demonic cannibals.

The series is fruit of the tradition Hyakumonogatari Kaidankai [A Gathering of One Hundred Supernatural Tales], where Japanese friends would meet to share fantastically frightening tales from folklore and their own experience. Having lit a hundred candles, they would give their blood-curdling accounts, one by one, blowing out a candle after each, plunging themselves deeper into darkness. Upon the last candle going out, a spirit was said to appear.

The Mansion of the Plates (Sara-yashiki) 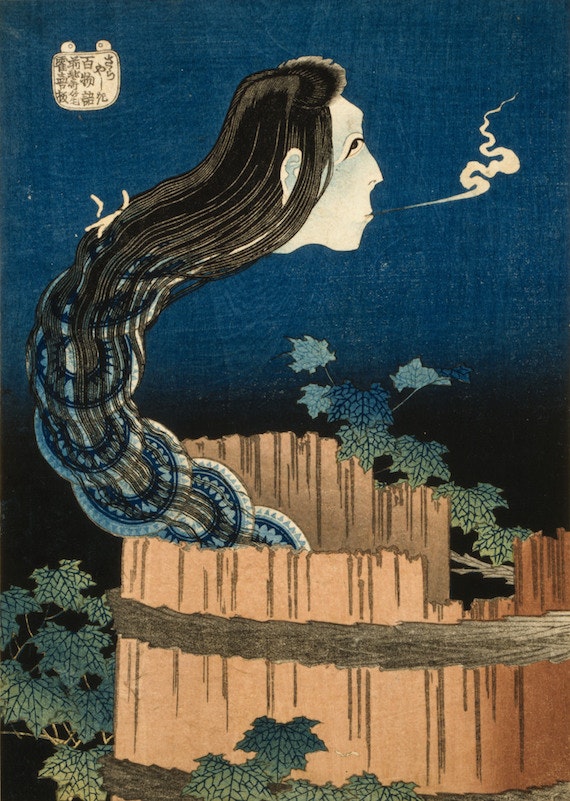 After the maid Okiku had accidentally broken one of a set of elegant Korean plates, her infuriated master bound her and threw her down a well, where she died in body but not spirit. In 1795, wells around Japan became infested with a species of worm covered in thin threads, which people believed to be a reincarnation of Okiku; the threads being the remnants of the fabric used to bind her. They named it “Okiku mushi” [the Okiku bug]. 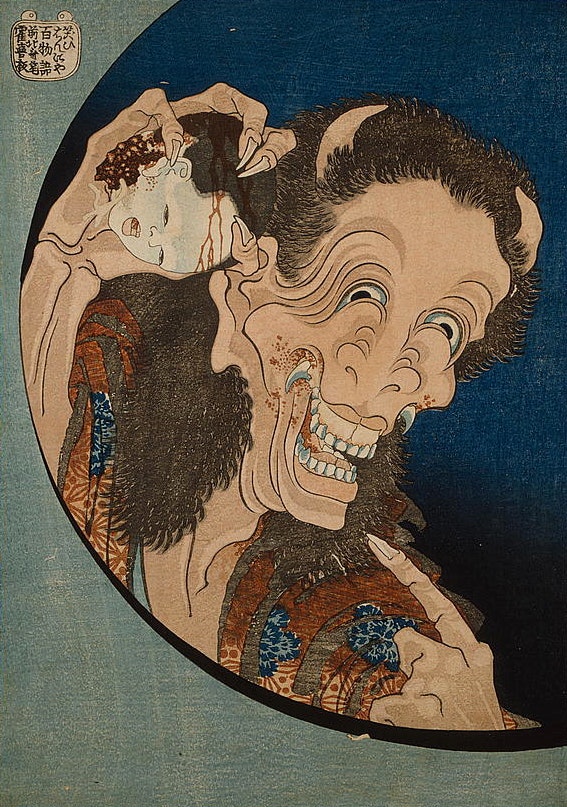 This gleeful cannibal is an unholy union of two other monsters: a “hannya”, whose jealousy has turned her into a horned demon; and a “yamanba”, who dwells in the mountains living off the meat of kidnapped children. 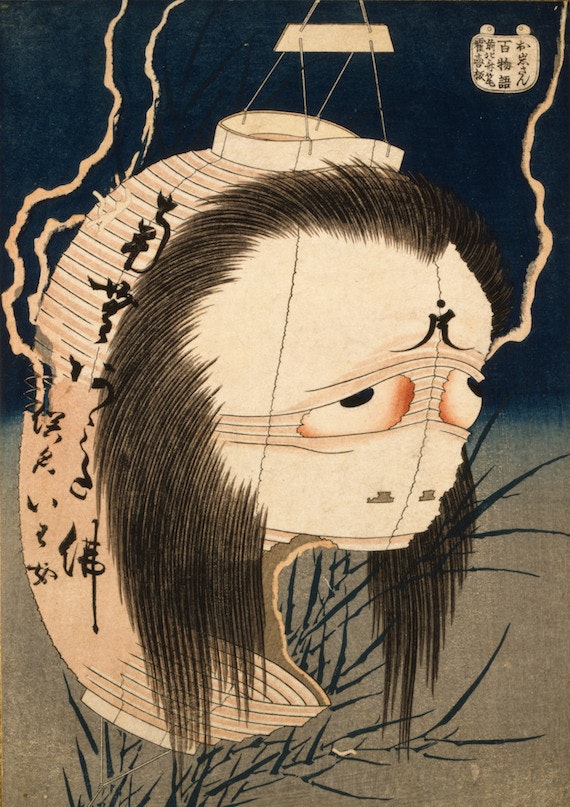 The young Oume falls in love with the married samurai Tamiya Iemon, and her friends try to get his wife Oiwa out of the picture with a gift of poisonous face cream. When Iemon abandons his newly disfigured wife, it sends her mad with grief. In her hysteria she runs and trips onto a sword, cursing Iemon with her dying breath — and then adopting various forms to haunt him, including a paper lantern. 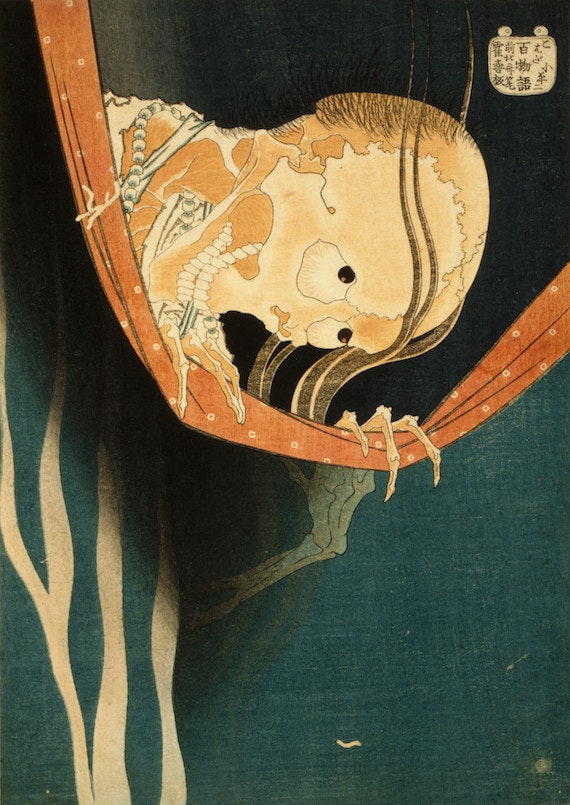 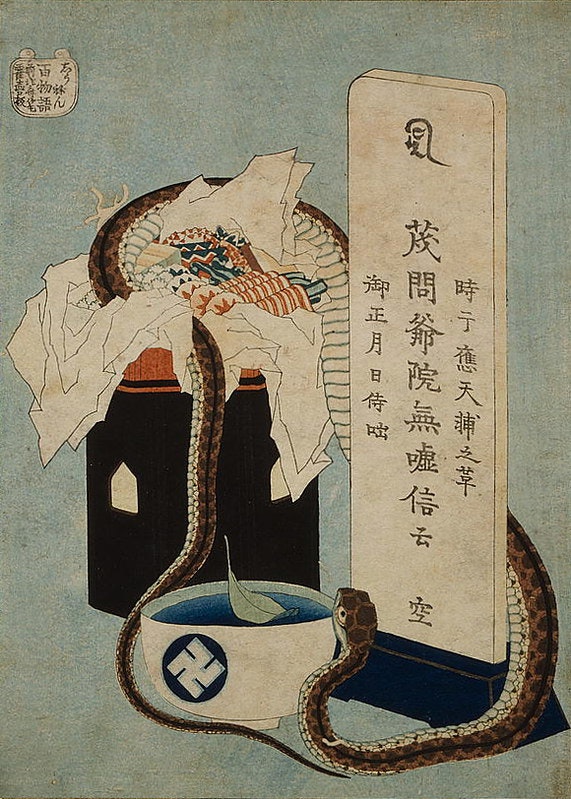 The snake here represents obsessive jealousy, an emotion thought to transcend death, and wraps itself around a Buddhist memorial tablet (traditionally placed on an altar at the home of the deceased). The bowl of water decorated with the swastika appears to be a good luck offering: though tainted by its association with National Socialism, the swastika has been an auspicious symbol for thousands of years in cultures from the Ukraine to the Aztec Empire.