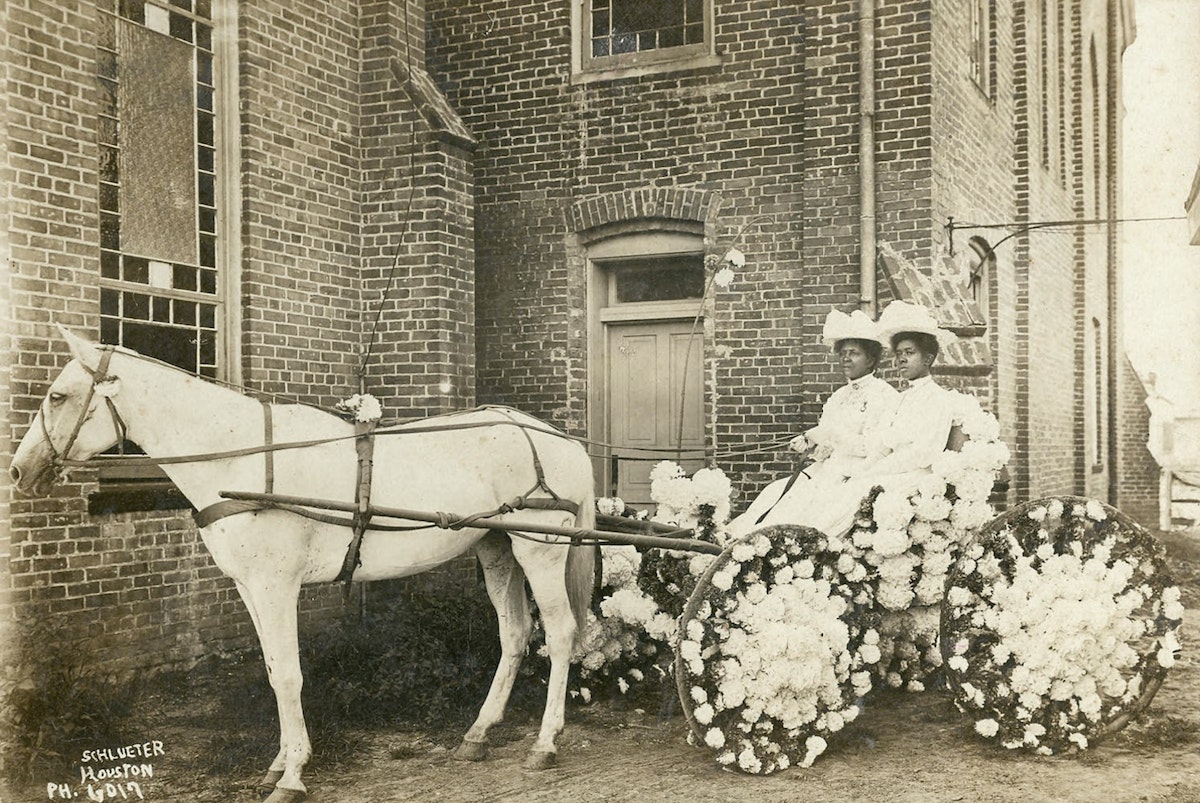 Although Abraham Lincoln issued the Emancipation Proclamation on January 1, 1863, the Civil War then raging prevented it being enacted in much of the American South until months or even years later. Emancipation Day, or Juneteenth, is a celebration to mark the eventual country-wide realization of the decree — on June 19, 1865, when around 250,000 enslaved people were finally declared free in Texas — the last state in the US to be reached by the Union Army, commanded by General Gordon Granger, meaningfully accompanied, as historian Elizabeth Hayes Turner notes, by “two transports of colored troops”. Although Granger did not read out the Emancipation Proclamation itself on that day in Galveston, he did read out “General Order No. 3”, which began:

The people of Texas are informed that in accordance with a Proclamation from the Executive of the United States, all slaves are free. This involves an absolute equality of rights and rights of property between former masters and slaves, and the connection therefore existing between them becomes that between employer and free laborer.

One year later, the first anniversary of Juneteenth — or “Jubilee Day” as it was then called — was celebrated in several places in Texas. The tradition soon took hold throughout the state. Communal barbecues, concerts, prayer services, parades, as well as baseball games, fishing, and rodeos, all featured in the festivities. Some former enslaved people and their descendants living in far-flung parts of Texas made a pilgrimage to Galveston, and many dressed in their finest clothes — partly in response to the pre–1865 statewide laws that had prevented enslaved people from dressing in any clothing not given to them by those who held them in slavery.

Many of the photographs that survive from these early decades of the celebration — including sets from Houston and Corpus Christi — depict elegantly dressed groups in horse-drawn carriages elaborately decorated with flowers down to the wheels. Another set from Austin — taken in 1900 by Grace Murray Stephenson — shows a group of older people, many or all of whom would have been born into slavery, dressed up for the day, as well as a very well-posed six-piece band, and a group of men decked out in Civil War uniforms (perhaps reenacting the Union’s entry into Galveston).

Of course, violence toward Black Americans did not magically evaporate with emancipation, and racial segregation and prejudice in some places made Juneteenth celebrations very difficult. Often forbidden from celebrating on public land, many gatherings had to be disparately held in remote rural areas or small church grounds, leading some Black Texan communities to band together and buy land specifically for celebrating Juneteenth (and other community occasions). The first such communally-bought land was Houston's Emancipation Park, a ten-acre lot purchased in 1872 by the Colored People’s Festival and Emancipation Park Association led by the Baptist minister and formerly enslaved Jack Yates. You can see Reverend Yates pictured (far left) in the Juneteenth group shot below (and in the featured image above, two of his daughters in a decorated carriage). 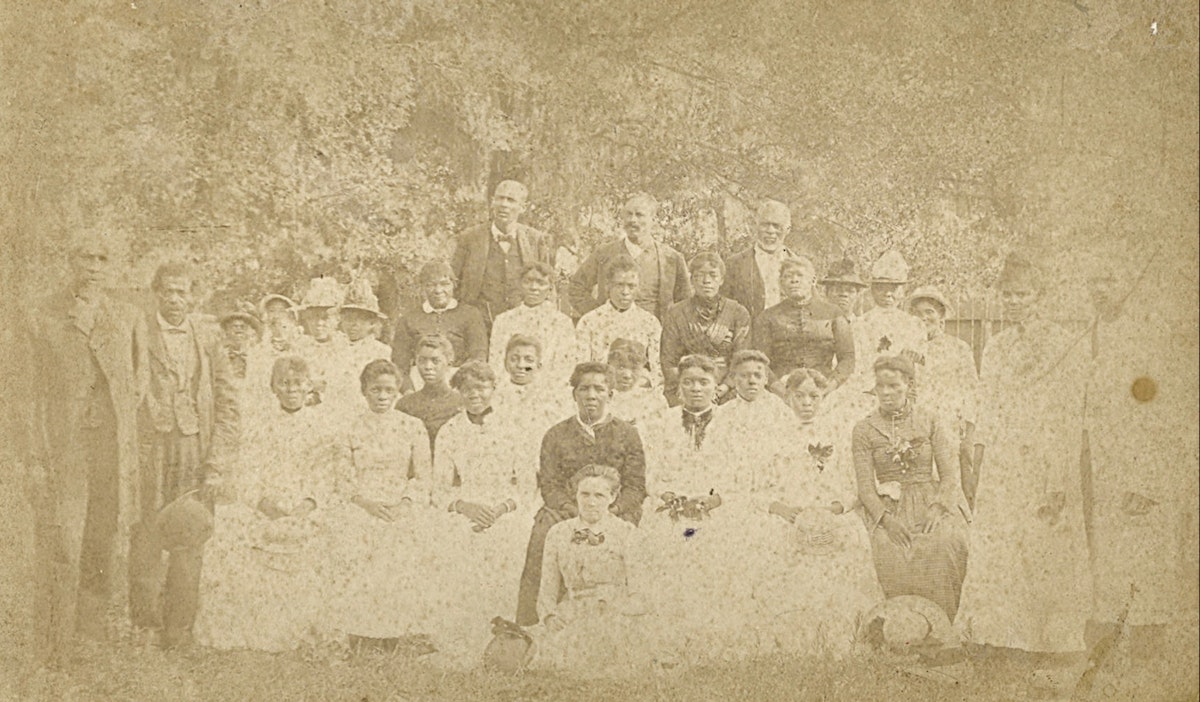 Group on Emancipation Day, circa 1880s, in Houston's Emancipation Park. Reverend Jack Yates, who led the community purchase of the Park in 1872, is pictured on the far left, and his daughter Sallie Yates dressed in black in the centre — Source

Following Houston's example, in 1898, Mexia's Nineteenth of June Organization bought an area of land on the banks of the Navasota River, now known as Booker T. Washington Park, which was said to draw up to 30,000 for the celebration. Another dedicated community-bought land was in Austin. The photographs we've featured of the city's Juneteenth celebrations of 1900 took place in what was then called Wheeler's Grove (now Eastwoods Park) but a few years later an association, led by the formerly enslaved Thomas J. White, purchased a plot for the purpose, also named Emancipation Park (although 30 years later the city of Austin seized it to build housing).

Over the course of the late nineteenth and early twentieth centuries, Juneteenth festivities became increasingly common outside of Texas — often brought to new places throughout the country by Black Americans who’d moved away from the state. In the 1950s, the holiday temporarily faded in popularity. This was to some extent due to the Great Migration, when many Black Americans found themselves in northern cities, working for bosses who did not recognize Juneteenth. (The US Congress has still not recognized it as a national holiday, although forty-seven states do at least acknowledge its existence.) It was also to some extent due to the changing political attitudes of the mid–twentieth century, when celebration of difference was sometimes seen as antithetical to integration.

During the last half century, however, Juneteenth has grown more and more popular again. In addition to the old traditions of parades, cookouts, and music, new traditions have sprung up — including readings of work by Black American writers such as Maya Angelou and Ralph Ellison (whose second, long, and long-unfinished novel was titled Juneteenth). The celebration of difference and the commemoration of the ongoing struggle for freedom, equality, and respect have become central to this second American independence day.

You can read more about Juneteenth —past, present, and future — here and browse our selection of historical photographs of Juneteenth celebrations from across the US below.

Group of men in Civil War uniforms, likely for a re-enactment of the Union’s entry into Galveston. Photograph by Grace Murray Stephenson of Juneteenth celebrations in Eastwoods Park, Austin, 1900. — Source

Group posing in front of a shop at E. Main Street near 21st Street in Richmond, Virginia on Juneteenth, ca. 1900 — Source

Detail from a photograph of celebrations in Richmond, Virginia, ca. 1905 — Source

Woman in a decorated carriage on Juneteenth, in front of Antioch Baptist Church in Houston's Fourth Ward, ca. 1900 — Source

Martha Yates Jones (left) and Pinkie Yates (right), daughters of Rev. Jack Yates, in a decorated carriage in front of a house, 1908 — Source

People gathered before a stage. Photograph by George McCuistion of Juneteenth celebrations in in Corpus Christi, Texas, 1913. — Source

Mr. Daniel. N. Leathers Sr., sat in a decorated carriage. Leathers, born in North Carolina in 1855, moved to Corpus Christi and became a successful merchant and was involved in state politics. A public housing development in Corpus Christi named in his honor was destroyed in 2017 to make way for the Harbor Bridge. Photograph by George McCuistion of Juneteenth celebrations in in Corpus Christi, Texas, 1913. — Source

Two women and a man in a decorated carriage. Photograph by George McCuistion of Juneteenth celebrations in in Corpus Christi, Texas, 1913. — Source

A woman stands before a decorated carriage. Photograph by George McCuistion of Juneteenth celebrations in in Corpus Christi, Texas, 1913. — Source

Group of women in decorated carriage. Photograph by George McCuistion of Juneteenth celebrations in in Corpus Christi, Texas, 1913. — Source

Group of women and men in a decorated carriage. Photograph by George McCuistion of Juneteenth celebrations in in Corpus Christi, Texas, 1913. — Source

Photograph by George McCuistion of Juneteenth celebrations in in Corpus Christi, Texas, 1913. — Source