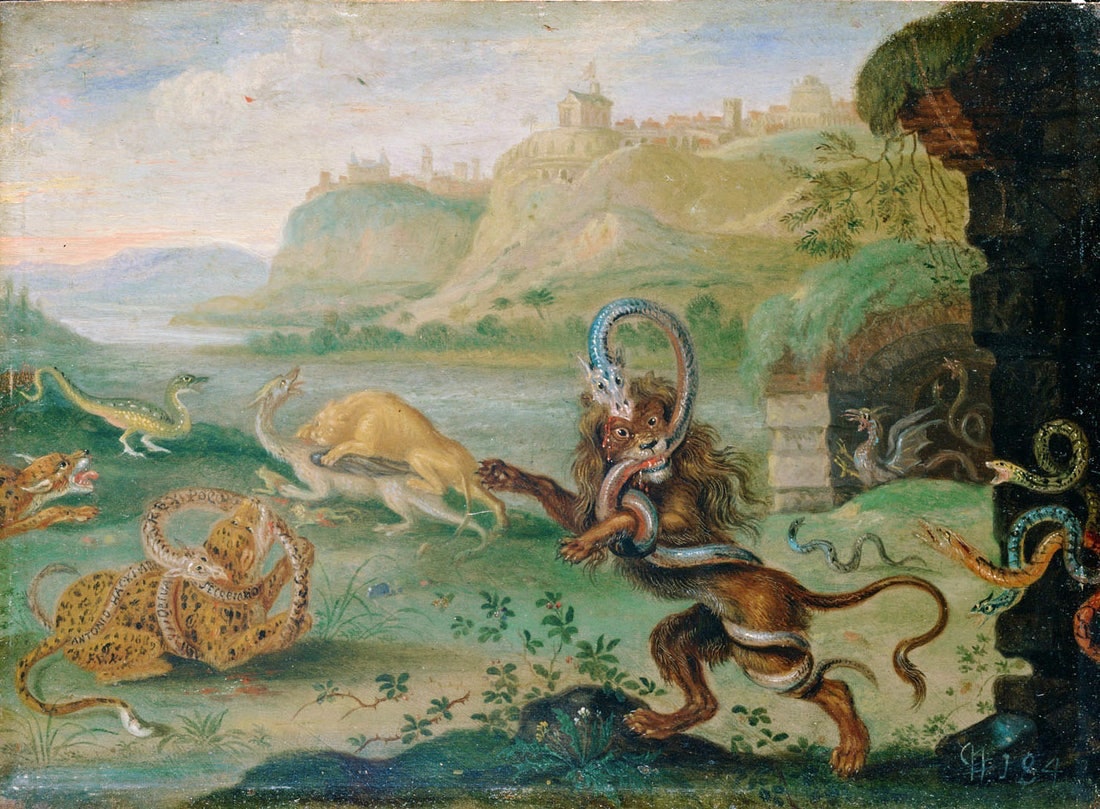 In these bewildering landscapes by Flemish artist Ferdinand van Kessel (1648–1696), the built environment of the human world feels almost superfluous. The guard towers of Puerto Rico, plazas of Damascus, and church steeples of Stockholm are all sequestered behind a series of vibrant animal tableaus. Commissioned circa 1689 for King John III Sobieski of Poland, Ansichten aus den vier Weltteilen mit Szenen von Tieren (Views from the four parts of the world with scenes of animals) consists of sixty-eight oil paintings atop copper plates. For each continental region — Europe, Asia, Africa, and the Americas — sixteen nine-inch-wide landscape scenes from the outskirts of notable cities are organized around a large, central panel, forming four complete works of more than five feet in length.

Born into a lineage of renowned artists including Jan and Pieter Bruegel (the Elders), Ferdinand’s father, Jan van Kessel, was an accomplished painter in his own right, whose unique style distinguished him from other well-known naturalist illustrators. Rather than reproducing rows upon rows of carefully organized organisms, Jan van Kessel brought his creatures to life through dynamic compositions. Nearly three decades prior to his son’s commission, it was Jan who produced the original Four Parts of the World series (ca. 1660). Here, his technical skill and aesthetic bravado are on full display. Lions stand dramatically on muscular hind legs. Predatory birds dig their talons into snakes. Alligators are shown hatching from metallic blue eggs as rhinos puncture seemingly indifferent elephants.

Garnering illustrative skill from his father’s works, Ferdinand inherited Jan’s meticulously crafted models of myriad flora and fauna. While Ferdinand’s “views” differ formally from those of his father, some include strikingly similar elements. Place their scenes for “Amsterdam” side by side and you will see the same pair of hares, a brown one leaping forth from its burrow, as its pale companion stalls. Elsewhere, as if recognizing his debts, Ferdinand forms an autograph out of insects, the way his father had in the central panel for Europe. When their landscapes approach remote climes, however, the Van Kessels’ painted creatures become increasingly strange, as observational accuracy decays into the exotic imaginary. “These fascinating pieces”, writes the art critic Saim Demircan, “reveal an undulating representation of angst. . . namely that of the unknown”. In a landscape from Jan van Kessel’s America, for example, muscular mermen with azul and yellow hair sit in conversation by the beach, alongside a fish that resembles a rotorcraft, thanks to a headdress of squid limbs. These same characters can be seen in Ferdinand van Kessel’s depiction of Luanda, Angola. Not only had neither artist actually observed these animals, but — at a distance from Europe — Africa and America blend together into a shared terrain of fantasy. 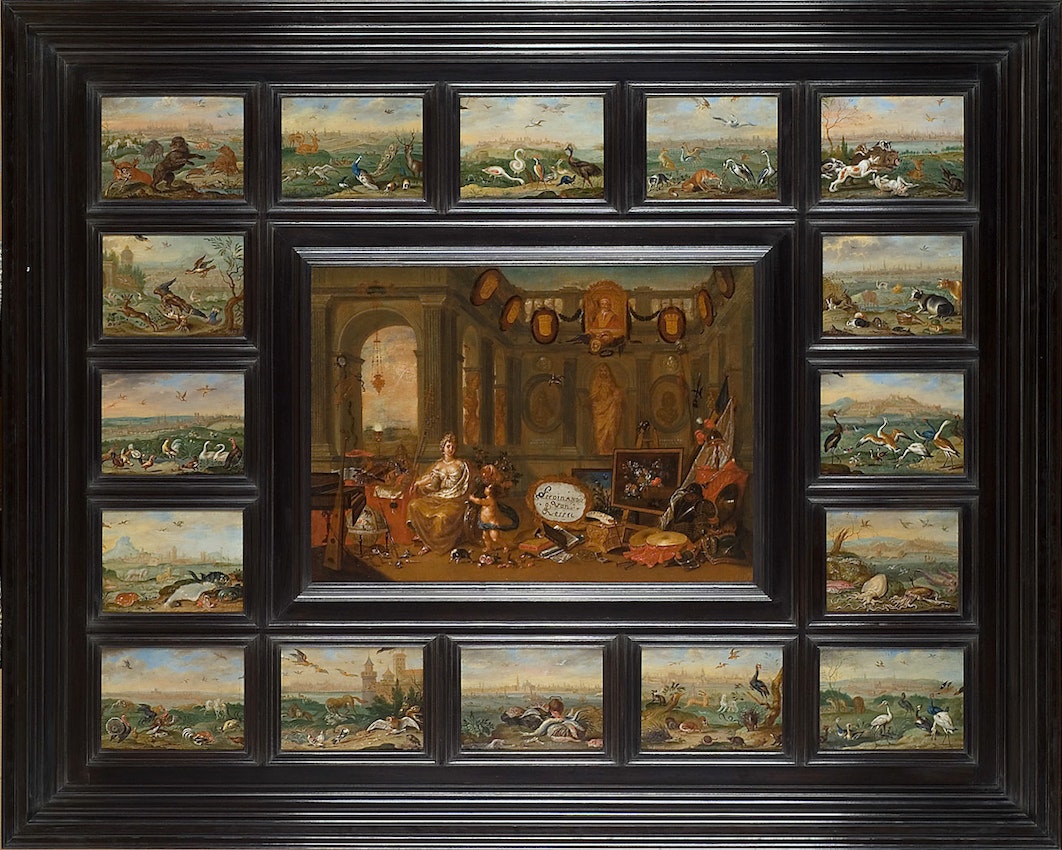 The collection-like quality of the Van Kessels’ paintings recall the Kunstkammer tradition — rooms of curiosity replete with odd or foreign rarities, from antique art to ivory tusks — but their paneled arrangements also evoke kunstkasten: a class of seventeenth-century decorative cabinets, which often featured painted miniatures on copper sheets. By displaying their works in compartmentalized frames, Ferdinand and Jan van Kessel recast “the materials and luxury status of the kunstkast in order to create a fundamentally different, inverted object that privileges small-scale paintings over the furniture in which they were traditionally embedded and subordinated”, argues the curator Nadia Baadj. Freed from these enclosures, the paintings become like the landscapes they depict: the built environment of the human world recedes into a backdrop against which to experience miraculous, dynamic, and colorful, if sometimes impossible, animal forms.