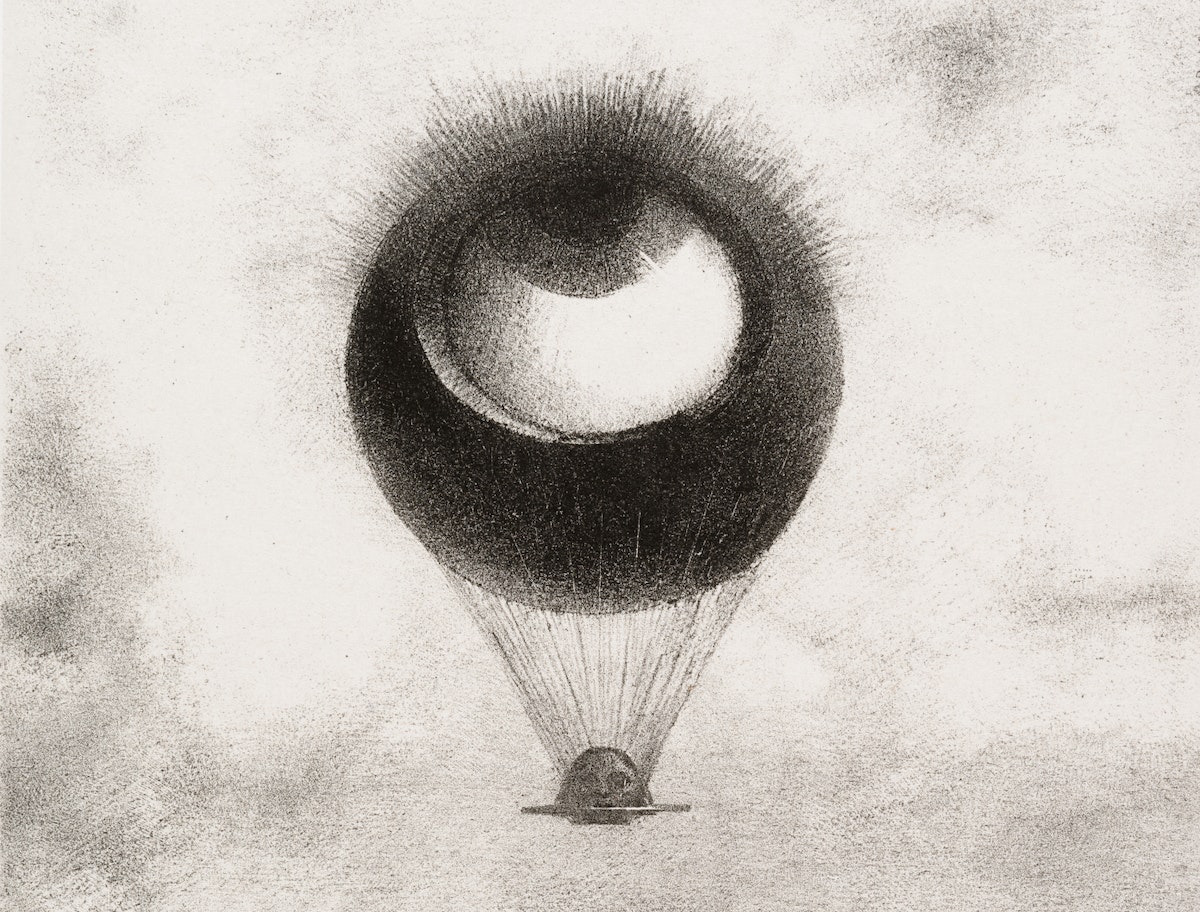 Odilon Redon (1840-1916) was many things: a painter, printmaker, draughtsman, and pastellist, who, over the course of his career, developed a singular style that fed both the decadent symbolism of the late nineteenth century and the modernism of the early twentieth. One of France’s most influential, yet (still) relatively unknown visionaries, he etched disembodied eyeballs and smudged ballooning minds in charcoal chiaroscuro, floating through a bardo between death and hell. His atmospheric melancholia bridged the Gothic with Surrealism, focusing on three types of landscape: nocturnal, autumnal, lunar. He had a naturalist’s talent for biological insight, but refracted through the medieval bestiary, and summoned figures mired so deeply in ugliness that they emerge both uncannily cute and unsuspectedly evocative. Like Francisco de Goya, writes the curator Jodi Hauptman, Redon “traffics in the monstrous and the diabolic, in distortion and degeneration, and deploys line, shadow, and hue to induce sensations of unease and dread”. But, alongside these idiomatic images of anguish, Redon is perhaps best remembered as an artist who influenced (and was influenced by) some of the most electric currents of nineteenth-century literature, both in English and in French.

Gustave Flaubert, author of Madame Bovary, spent thirty years trying to write about the temptation of Saint Anthony, which, as Colin Dickey argues, found its ultimate realization in Redon’s adaptation of the novel to a series of prints. The French writer Joris-Karl Huysmans, who shared Redon’s taste for deformity, described the painter’s typical subject matter in his novel À rebours (1884), helping draw attention to an artist still struggling for recognition:

. . . figures whose simian shapes, heavy jaws, beetling eyebrows, retreating foreheads and flat skulls, recalled the ancestral heads of the first quaternary periods, when inarticulate man still devoured fruits and seeds, and was still contemporaneous with the mammoth, the rhinoceros and the big bear. These designs were beyond anything imaginable; they leaped, for the most part, beyond the limits of painting and introduced a fantasy that was unique, the fantasy of a diseased and delirious mind.

Later, this same character describes how Redon seems to have transposed Edgar Allan Poe’s tales, their “mirages of hallucination and effects”, into a different medium. Indeed, it is in a series of six lithographic dreamworlds titled À Edgar Poe, where we find some of Redon’s most evocative works. “What is astonishing in the Poe-Redon fusion”, writes Marina van Zuylen, is that “both artists yearned for rules of composition while portraying creatures that were unruly and decomposing”.

In Un masque sonne le glas funèbre (A mask sounds the death knell), for instance, a face detached from any skull chimes a church bell with its skeletal hand. Here the end of life becomes literal disintegration, recalling Poe’s poem “The Bells”, which begins with festal jingling (birth, marriage) and then decays into the jangling repetition of a dissonant virge:

In other images from the À Edgar Poe series, Redon alludes to Poe while also playing out his own poetics of sight. The pièce de résistance, perhaps, in this regard, is captioned L’oeil, comme un ballon bizarre se dirige vers L’INFINI (The eye, like a strange balloon, mounts toward Infinity). To figure out where Redon alights on Poe requires some critical stitching, like Frankenstein assembling the cemetery organs. Van Zuylen connects Redon’s hot-air eyeball to a passage from Poe’s “Berenice”, a late story that picks up one of the author’s favorite themes: the parallel between intellectual realization and erotic longing.

There is, however, a remembrance of aerial forms—of spiritual and meaning eyes—of sounds, musical yet sad—a remembrance which will not be excluded; a memory like a shadow—vague, variable, indefinite, unsteady; and like a shadow, too, in the impossibility of my getting rid of it while the sunlight of my reason shall exist.

While Redon later downplayed his interest in the American author, claiming that he made the lithographs as a gambit for fame, his deep immersion in Poe’s oeuvre becomes all the more visible the longer we look. You can browse the complete À Edgar Poe series below (and three of them for sale as prints in our shop here).

“The eye, like a strange balloon, mounts toward Infinity.”

“Before the black sun of Melancholy, Lenore appears.”

“On the horizon, the Angel of Certitude, and in the somber heaven a questioning eye.”

“The living breath is also in the Spheres.”

“A mask sounds the death knell.”