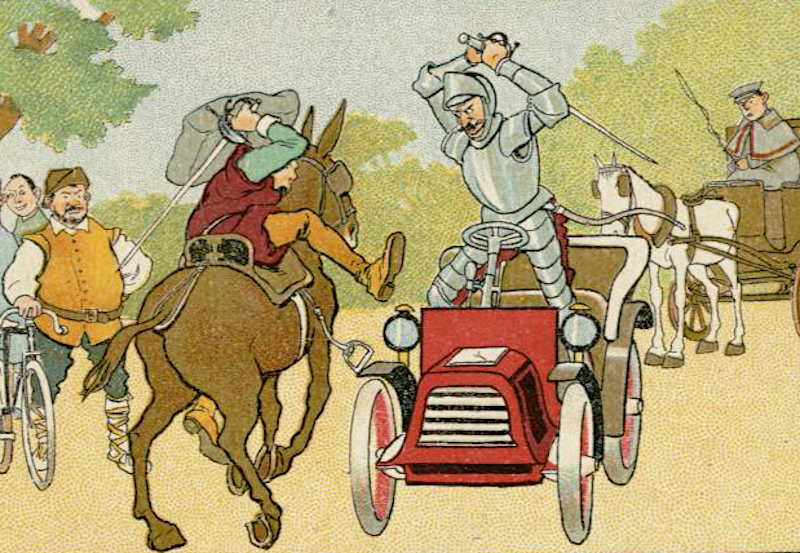 These colorful chromolithograph postcards by the Spanish cartoonist Pedro de Rojas reimagine the adventures of Don Quixote and Sancho Panza for the twentieth century. We see the Knight of the Melancholy Countenance ballooning into windmills, fighting with what appears to be a park ranger (the caption identifies him as the Knight of the Forest), entering a grand hotel with an umbrella under his arm, and jousting while riding in a motorcar.

The series of postcards closely follows the adventures of Cervantes’ Quixote, beginning with the gentleman reading too many books of chivalry in his study and proceeding through his many adventures to his death. In fact, the series takes part in a long tradition of illustrating the exploits of the hapless knight — see our essay “Picturing Don Quixote” by Rachel Schmidt for more on the book's iconography through the centuries.

We don’t know much about Rojas (and would be curious to learn more if anyone out there does). Born in Seville in 1873, he began working for several Madrid newspapers in his twenties before moving to Cuba in 1903 and, later, to Buenos Aires, where he died on September 4, 1947.

The first departure that Don Quixote made from his land.

The amusing manner that Don Quixote had of equipping himself as a knight.

The marvellous battle that Don Quixote waged against the Biscayan squire.

The adventure of the windmills.

The funeral of Grisóstomo, dead for love of the shepherdess Marcella.

The blanketing of Sancho Panza.

The adventure with a flock of sheep.

The capture of Mambrino's helmet.

The elegant deeds of the lover as performed by Don Quixote in the Sierra Morena.

The arrival of Don Quixote at the sale.

The uncommon battle of Don Quixote against some wine-skins.

The strange adventure of Don Quixote with the wagon of death.

The adventure of Don Quixote with the Knight of the Forest.

The unheard-of courage of Don Quixote in the happy adventure of the lions.

Don Quixote in the duke and duchess's house, replying to his rebuker.

The adventure of the famous horse, Clavileño.

Sancho Panza is taken to his governorship.

The adventure of Don Quixote with Doña Rodríguez, duenna to the duchess.

Don Quixote and Sancho trampled by the bulls.

Don Quixote is driven to his village.

The death of Don Quixote.