The Tanzmasken of Lavinia Schulz and Walter Holdt (ca. 1924) 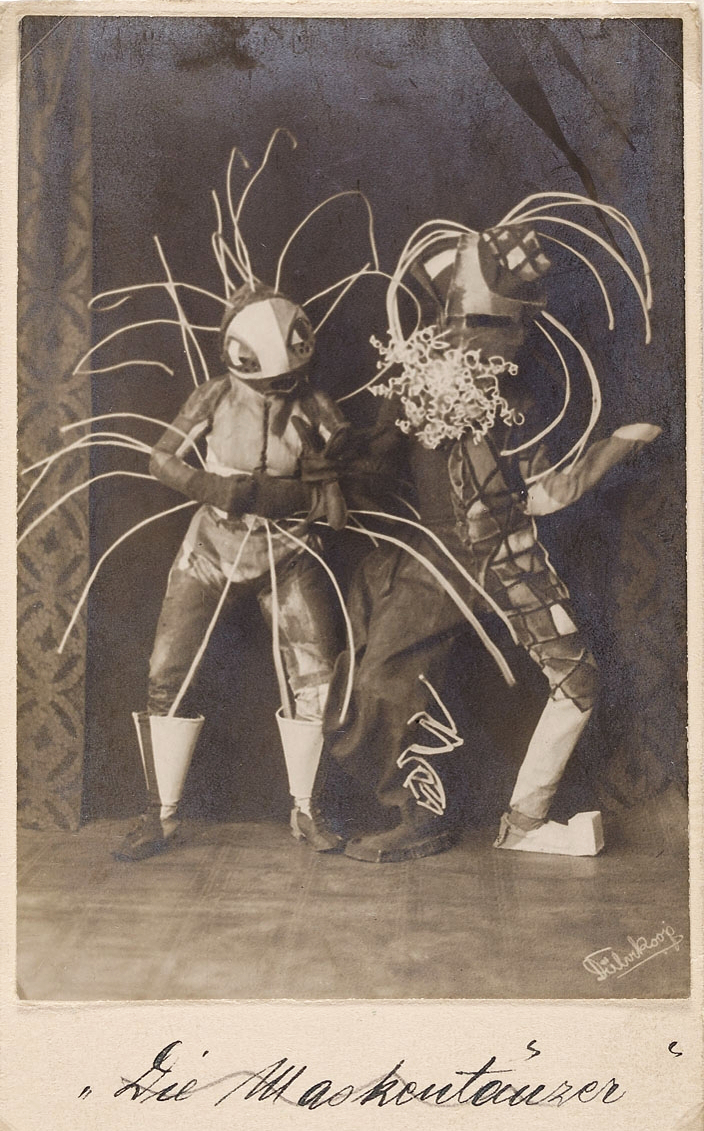 Photograph by Minya Diez-Dührkoop of the characters “Toboggan Frau” and “Toboggan Mann” created by Schulz and Holdt, 1924 — Source.

In January 1924, a German studio photographer of some status, Minya Diéz-Dührkoop, took portraits of a young avant-garde artist couple, Lavinia Schulz (1896–1924) and her husband Walter Holdt (1899–1924). The photos are unusual, partly because the couple’s faces are never visible, and partly because the costumes they’re wearing are so bizarre: Grandiose, but also earthy and oddball — a brigade of science fiction bogeymen, homespun.

Schulz and Holdt made these costumes for dancing; they performed under the name Die Maskentänzer (The Mask Dancers). The outfits are more sculpture than clothing, and they entirely swallow up the wearer. Some suggest a mongrel collision of characters — a buggy-eyed insect meets a jester meets a bearded tomato — and others allude to zippy motion, with eyeballs cartoonishly pulling off the face. Wires poke out and wooden blocks dangle, a bridge seesaws from shoulder to shoulder. Many of the geometric silhouettes defy anatomy; hands, feet, and heads are all boxed in, with no apparent exit. The bright, discordant colors were apparently chosen based on esoteric rules. Remarkably, Schulz and Holdt’s craftsmanship, especially the sewing, keeps pace with their imaginative reach.

The costumes for the characters “Bertchen”, in dark and light form, and “Toboggan Frau”, created by Schulz and Holdt, ca. 1924 — Source. 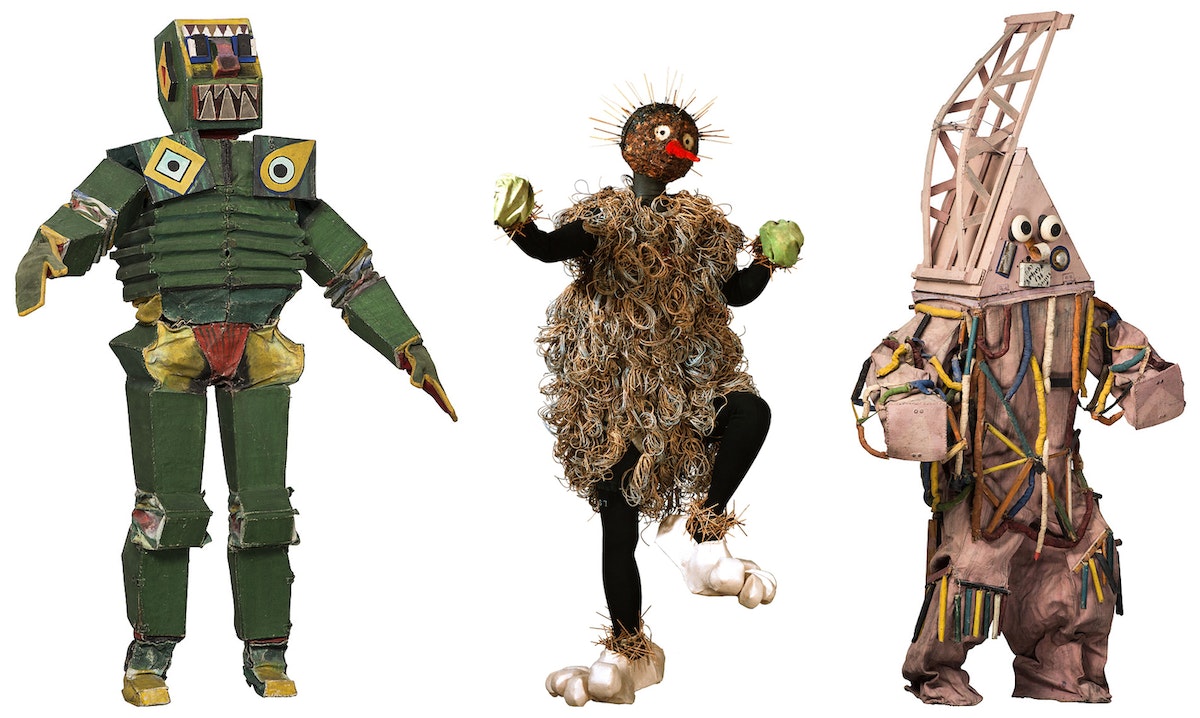 Six months after the portrait sitting, Schulz shot Holdt in the head, and then turned the gun on herself. Both died. Their one-year-old infant son, who was there beside them, was unharmed. Following the murder-suicide, the couple’s apartment was cleaned out, and their things taken to the Hamburg Museum of Arts and Crafts, where they were stashed in the attic. The boxes were forgotten for six decades, and luckily so; had the collection been properly catalogued, it would have likely been seized by the Nazis.

At the time of their death, Schulz and Holdt were somewhat notorious in the local art community. They’d performed recently at the Hamburg Museum, and also at a large arts festival. One historian describes their short-lived practice as “among the strangest produced by the whole Weimar dance culture”. Schulz was indisputably the duo’s leader. She directed the costume-making, and choreographed the dances. She was also the enforcer of the artists’ distinct philosophy, which correlated aesthetic value with suffering. The raison d'être of live performance, Schulz believed, was intensity, and the performer could channel intensity only if she was herself in an intense frame of mind. Privation made this state more accessible. “Art has to be exhausting”, Schulz wrote, “otherwise it is worthless”. Austerity, deprivation, and extreme self-discipline were essential — not so as to survive the travails of a creative life, but as a pre-condition for creating anything of value. 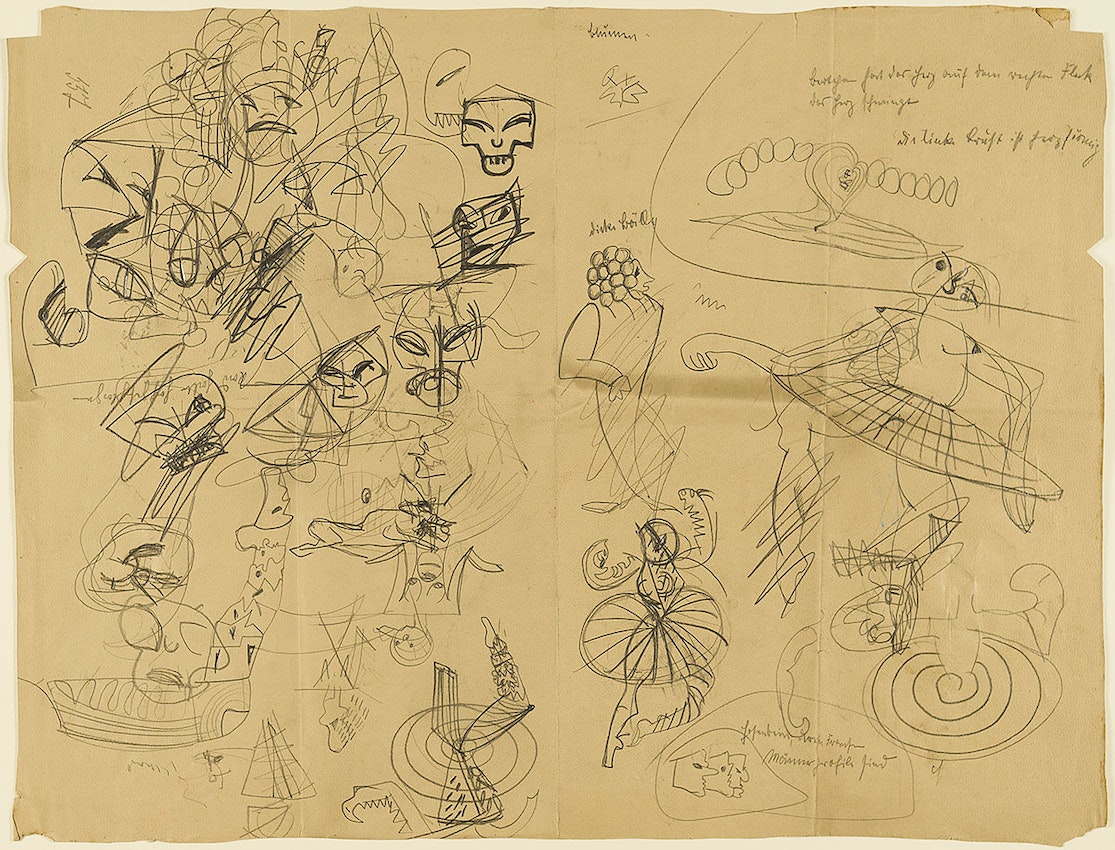 Sketches by Schulz of Tanzmasken, including the character “Bertchen”, ca. 1913 — Source.

Schulz practiced what she preached. The couple’s basement apartment had a dirt floor, outdoor toilet, and no electricity or running water. They slept in hammocks, or on straw. Gray tights and unitards were worn as everyday apparel, so that they could rehearse at any moment. Their materials were scavenged, and they avoided machines. Believing that art and commerce shouldn’t mix, they refused money for their work, which led to bouts of starvation, even after their child was born. To the interior of the costumes they added elements that were invisible to the audience but heightened their personal discomfort: weights, for instance, and nails pointing inward. Some of the outfits weigh more than forty kilograms. Schulz and Holdt also hurt each other. Their storied fights involved kicking and punching, terrible obscenities, and wrestling on the ground. During one rehearsal, with a large group watching, Holdt dragged Schulz around the room by her hair. Schulz apparently relished this; as a friend recalled, “catastrophe” was her métier.

Schulz seems to have imbibed some of her notions about art directly from her mentor, the German Expressionist theater producer and theorist Lothar Schreyer. A former copyright lawyer and future Nazi, Schreyer cultivated a tiny, cliquish circle of artsy young people, which he helmed as creative priest and chief. He had an outsized effect on Schulz’s life. He recruited her when she was just sixteen and had left her family in Lusatia to study in Berlin. Schulz stayed at Schreyer’s side for the next eight years. His description of her in his memoirs has the whiff of erotic intimacy: “wild and passionate, restrained only by the strict discipline of art”. 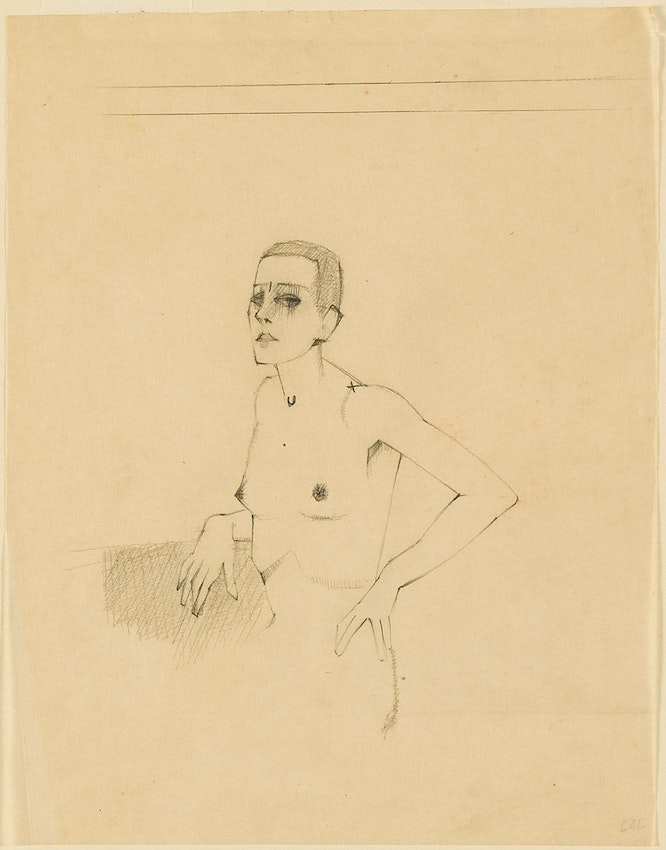 Schreyer flattered himself an art prophet, and Schulz proved an ideal disciple. She amplified his directives, and literalized his abstractions. For instance, when Schreyer cast Schulz in the lead role of his 1918 production of August Stramm’s Sancta Susanna, and explained the production concept as “a play of naked man”, Schulz decided to play her part naked, or nearly so. Her mentor was pleased, and much of the audience horrified. One critic called it “a murderous attack on the theatre”. Schreyer’s funding vanished after this production, so he moved the increasingly cultish company away from Berlin to the quiet town of Hamburg. (Subsequent performances were invitation-only, no critics allowed.) In Hamburg, Schreyer recruited some new acolytes from the local high school, among them Holdt. Holdt and Schulz fell into a relationship that was preternaturally intense. After one epic scene of violence, Schreyer kicked them both out. Without Schulz’s talent, however, the group folded. Schreyer moved on, taking a position at the Bauhaus teaching stagecraft, while his former students struck out on their own.

Schulz was then twenty-four-years old and Holdt twenty. Their marriage and collaboration would last three years. Abstract, handmade costumes remained central to their practice, and Schulz used her teacher’s system of notation to choreograph dances that were low to the ground, with lots of lunging, squatting, and creeping. (Schreyer had said that one should not dance like a marionette, as in ballet, but like someone holding a marionette.) They scored their work with Schönberg’s cacophonous twelve-tone system, formulated just a few months previous. 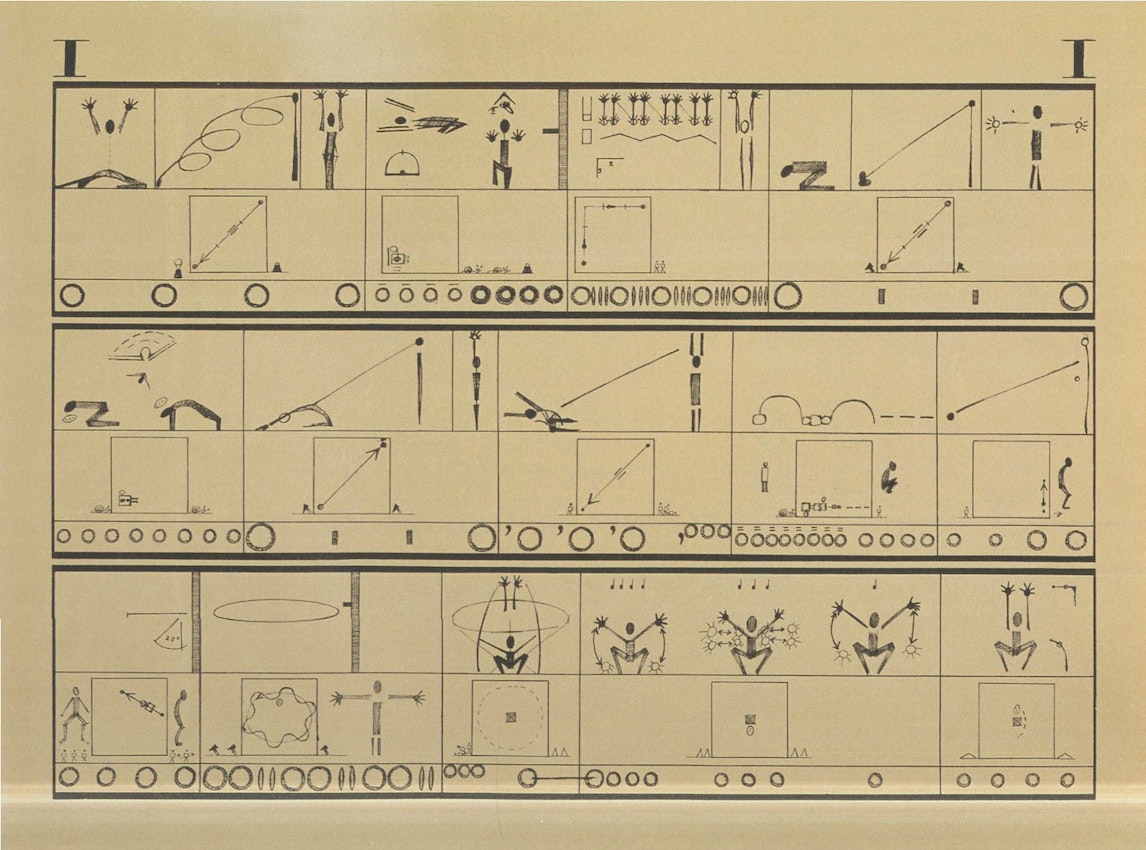 Some say that Holdt was cheating on Schulz and she shot him in revenge. Others that Holdt had retreated to bed, from illness or depression, and Schulz was furious that he’d abdicated their collaborative practice. It was widely reported that the two were emaciated; indeed, many Germans were starving in 1924. What’s certain is that their costumes, rediscovered in 1988, remain singularly remarkable. It’s always a gamble when an artist bets on suffering, and who’s to say that Schulz and Holdt lost?

Special thanks to Joachim Baur.