Through the First Antarctic Night (1900)

Memoirs of early Antarctic expeditions are, by necessity, meditations on disaster. Sea ice, frostbite, freezing winds, the compass-upsetting effects of the magnetic poles — everything in these frigid zones poses a threat to human life, and the threat is often carried out. The Worst Journey in the World (1922) by Apsley Cherry-Garrard — a surviving member of Scott’s ill-fated Terra Nova expedition of 1910–1913 — is probably the most famous of these memoirs. The first, at least of the modern era of exploration, was Frederick A. Cook’s Through the First Antarctic Night, 1898–1899, a remarkable journal in which he recounts the highs and (many) lows of his experience as part of the Belgica expedition.

Often considered the first proper expedition of the so-called "Heroic Age of Antarctic Exploration", it would set a precedent for hardship, endurance, and disaster in the exploration of such climes. Cook and his fellow explorers — including Roald Amundsen, who'd years later go on to beat Scott to first reach the South Pole — became the first to spend winter on Antarctica, when their ship became trapped in the ice for more than a year, from February 1898 to March 1899. For two months — from 17th May 1898 until 23rd July — they were plunged into a sunless world, an ordeal of great physical and mental toil wonderfully captured in the journal of Cook — the American-born anthropologist, surgeon, and leader of the expedition. 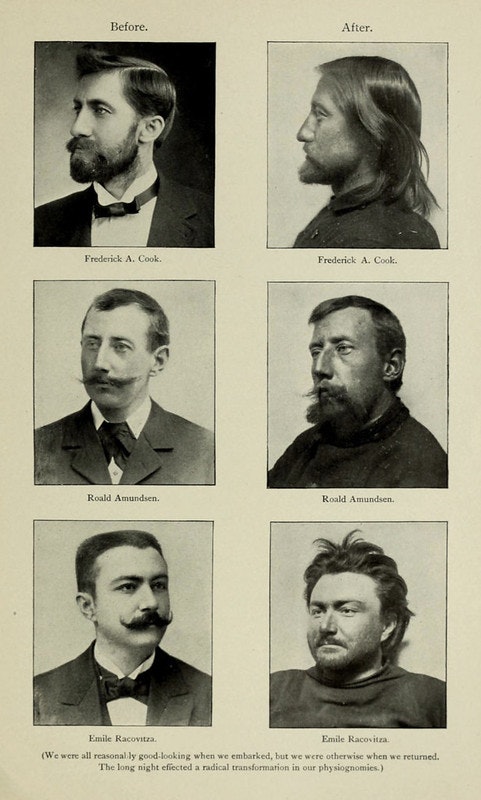 Although he was later the subject of controversy — accused of bogusly claiming, in 1906, to have scaled Mount McKinley, and, in 1908, to have been the first to reach the North Pole — in Through the First Antarctic Night Cook shows himself to be reasonably modest and a charming writer of prose. He is especially good at evoking the “soul-despairing” darkness of the polar night, which had never previously been experienced at that latitude. All around the ship, the freezing wind howls, the pack ice groans, and the snow blows wildly, pricking the skin like needles. Occasionally, when the weather is right, strange lights appear low in the sky:

Precisely at twelve o’clock a strange rectangular block of fire appeared in the east-south-east. Its size was that of a small tabular iceberg, but it had a dull crimson glow which made the scene at once weird and fascinating. Its base rested on the horizon and it seemed to rise, brighten, and move northerly. […] We watched this with considerable awe and amazement for ten minutes before we could determine its meaning. It passed through several stages of forms, finally it separated, and we discovered that it was the moon. It was in fact a sort of mirage of the moon, but the strange rectangular distortion, the fiery aspect, and its huge size, made a sight long to be remembered.

Darkness descends on the men in more ways than one. In June, the death of Emile Danco, the much-loved Belgian magnetician, whose heart troubles were exacerbated by exertion in the cold, casts the crew into a spell of despondency. Then, less than three weeks later, Cook writes: “We are playing cards and grinding the music-boxes, and trying in various ways to throw off the increasing gloom of the night; but something has happened which has added another cloud to the hell of blackness which enshrouds us.” The cat named Nansen, which one of the sailors brought with him from Europe, has died in agony, and for many days Cook can find nothing to note in his journal — there being “nothing to mark time or disturb the gloom of the long black monotony”.

Hope returns with the return of the sun. “In these dreadful wastes of perennial ice and snow, man feels the force of the superstitions of past ages,” says Cook, “and becomes willingly a worshipper of the eternal luminary." Every man aboard the Belgica chooses a spot from which to watch the colourful lights that brighten the greyish darkness surrounding them, rendering “the death-dealing depression of the night a thing of the past”. When at last the sea ice thaws, Cook’s party is able to sail north to Patagonia, where they frighten the natives with their drunken, sea-legged walks and their battered faces and clothes. 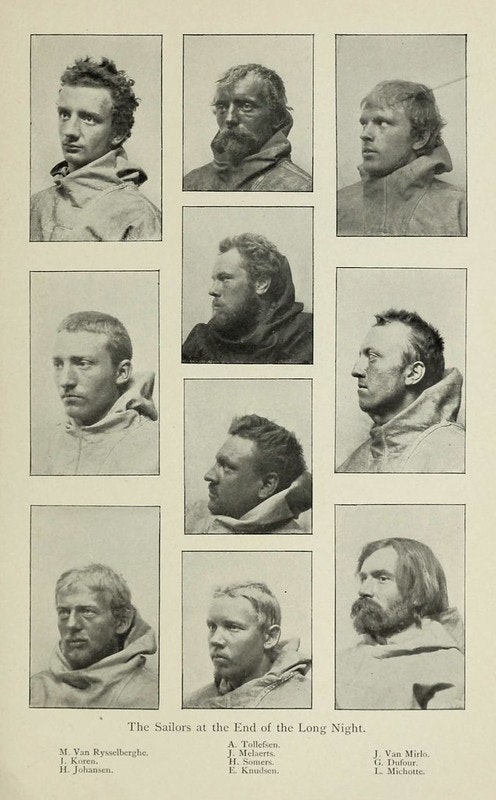 There is no shortage of gloom in Cook’s account, but there is also no shortage of excitement. The auroras and magic lights, the desolate sea and icescape, the occasional “visit of a penguin or seal” all punctuate the somnolent tedium “induced by the long night of months”. The penguins especially — the much-admired birds the men both hunt and play with — provide very welcome entertainment. Cook’s photographs of them, and above all the photographs titled “Penguin Interviews”, are among the many palpable pleasures of the book. 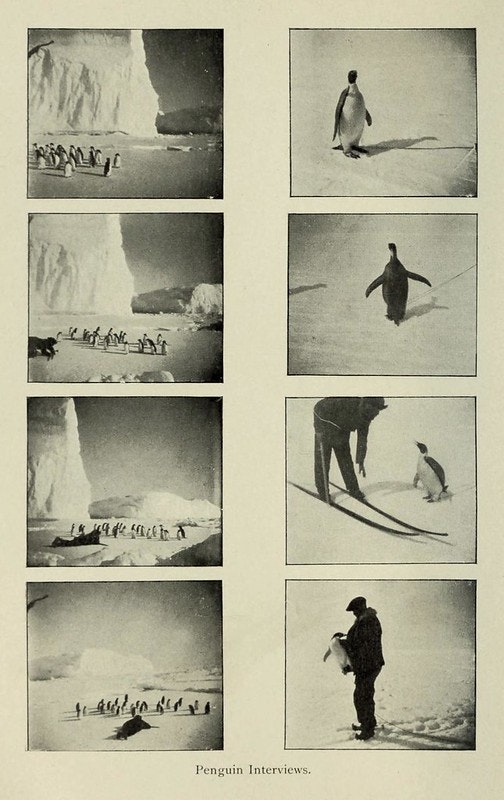 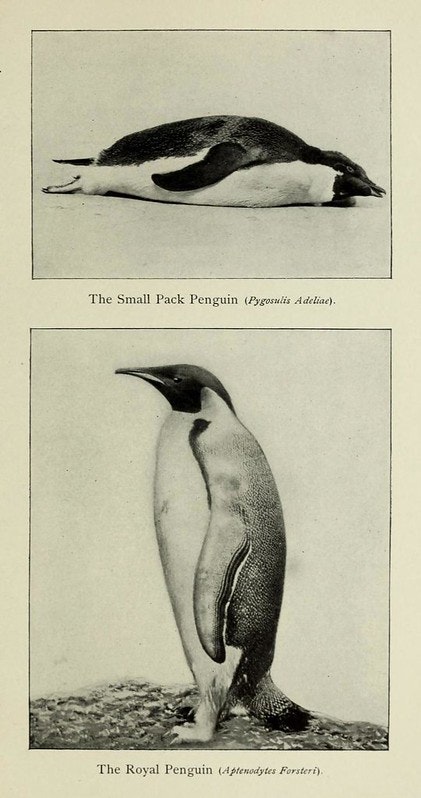 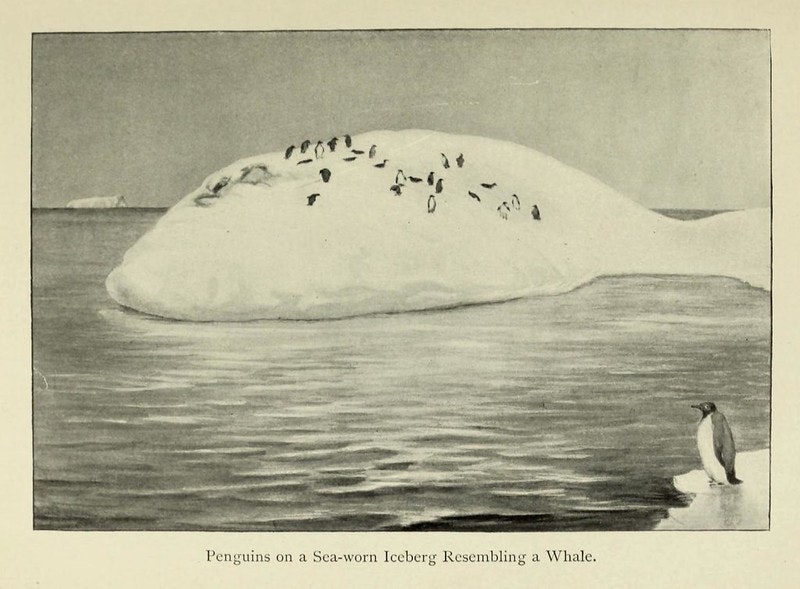