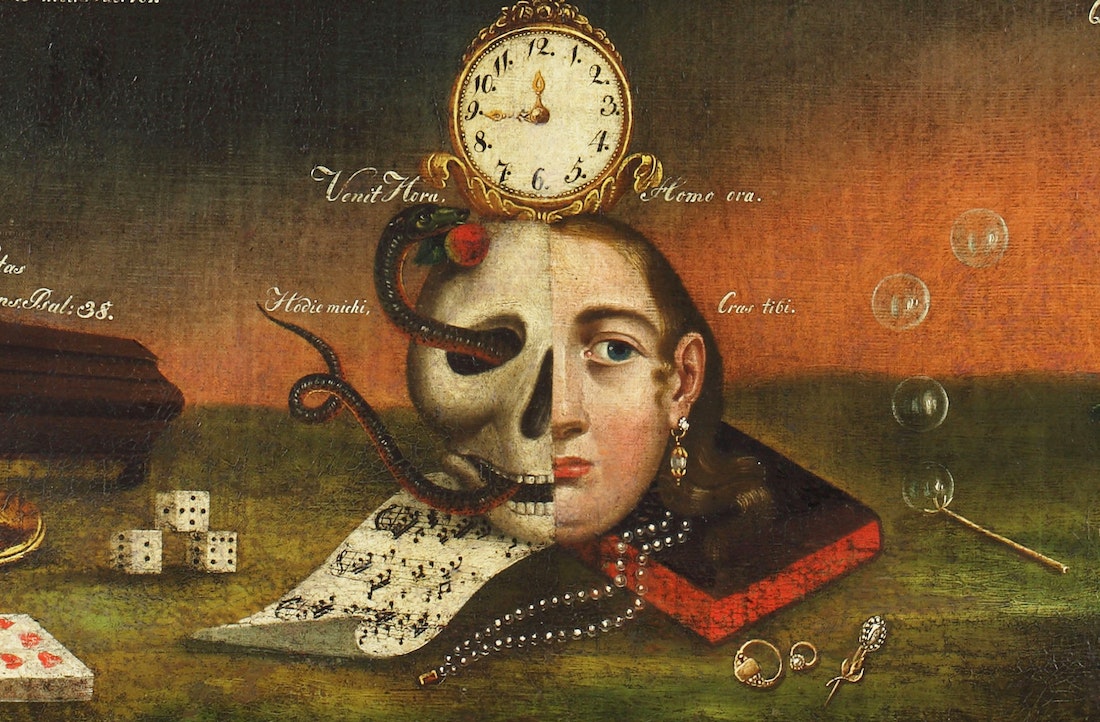 Detail from an 18th-century Memento mori created by a guild in Stary Sącz, Poland – Source.

We have entered the dog days of July in the Northern Hemisphere, with a heat wave bringing Europe to a rolling boil, and thoughts of sea, shade, or cooler climes to many people’s minds. Writing of a shadowed garden, Spanish poet Luis Cernuda (in Stephen Kessler’s translation) captures the lethargy of this weather and the pleasures of relief: how the summer atmosphere can feel “light, afloat; the world turning slowly, like a soap bubble, delicate, iridescent, unreal”. While soap froth has existed since at least the time of Mesopotamia, the fragility, iridescence, and impermanence that Cernuda describes started to bubble into the West’s visual imagination during the sixteenth century. Like the substance itself, which binds to all kinds of grime, soap bubbles make for sticky symbols, assuming disparate associations — from innocence to vanitas, physics to politics — in the artist’s eye.

Despite a monkey who seemed to be huffing bubbles in the 1480s, and the reed-blowing youth of Pieter Bruegel the Elder’s Children’s Games (1560), the earliest explicit soap bubble in painting is often credited to a panel on the back of Cornelis Ketel’s Portrait of Adam Wachendorff (1574). The front shows the secretary Wachendorff performing scribal duties, holding a letter freshly sealed above his inkwell and pen. Yet the painting’s frame reminds him that his writing, like all else, will fade too soon. “Sermo Dei Æternus Caetera Omnia Caduca”, reads the text: the word of the lord is forever and all else transient. Unlike the speaker of Andrew Marvell’s famous seduction, Ketel does not choose “time’s winged chariot” to chafe at Wachendorff’s back. Instead, he paints a bubble boy. Yet like the scribe himself, we are blinkered to this symbol of impermanence: the Rijksmuseum has not shared photographs of the verso, which shows a curly haired putto blowing suds. He is wreathed by Greek that reads: man is a bubble. 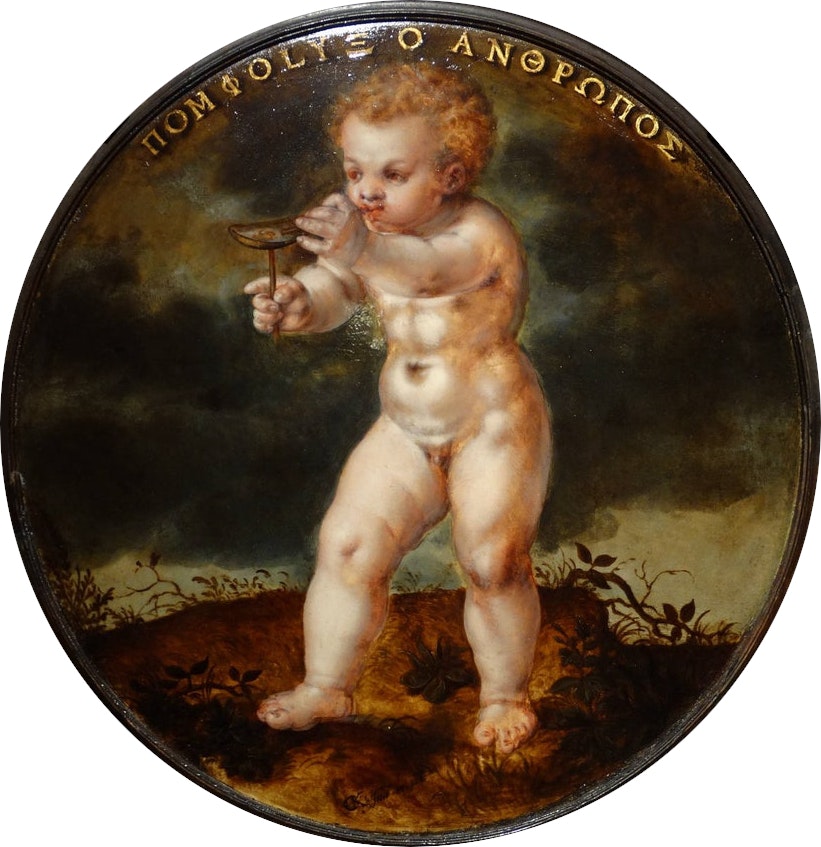 Ketel’s Portrait is an early example of using soap bubbles to represent vanitas — the transience of life and surety of death — while his putto plays the role of an allegorical figure associated with the emblem tradition of homo bulla. We find similar scenes in Netherlandish engravings and paintings, dating through the eighteenth century, by Raphael Sadeler (I), Jacques de Gheyn (II), Hendrick Goltzius, and Johannes de Groot (II). Across these images, lounging children blow bubbles while resting on skulls, as extinguished candle stubs and smoking urns create a cloudscape overhead. There is a kind of primordial equation here between life and enclosure. Like soap and water, the spirit cannot be separated from its etymological link to expiration. “Who first had the thought that the world is nothing but the soap bubble of an all-encompassing breath?”, asks the philosopher Peter Sloterdijk in Bubbles, while, during his Essay on Man, Alexander Pope imagines individuals as “bubbles on the sea of matter borne, / They rise, they break, and to that sea return”. Karel Dujardin’s 1663 Boy Blowing Smoke Bubbles seems to speak to the delicate membrane between our lives as distinct beings and what Freud — building on his correspondence with Romain Rolland — described as an oceanic pull: “a sensation of ‘eternity’, a feeling of something limitless, unbounded”. In the painting, a sashed youth blows bubbles while balancing on a clamshell amid dark and choppy waters. In place of a pearl, a giant surfactant orb rests beneath his left foot, the last piece of a necklace originating from the deeps. Spending time with this painting, we get the sense that it is “bubbles all the way down”, as it were — that the borders between soul, body, and world could, in an instant, pop.

From the mid-eighteenth century, artists turned their back on vanitas toward a focus on technique, melancholy, physics, and politics. Greater attention to the material details of bubbles may have come from longer-lasting soap, marketed explicitly for blowing by merchants such as Andrew Pears in Soho. A painting by Jean-Baptiste-Siméon Chardin dampens allegory to highlight the luster of its bubble’s edgeless body: a curved plane that throws sparkling light. Chardin’s painting, claims the soap-bubble scholar Sabine Mödersheim, marks a shift in cultural narratives of childhood, when bubbles became “much more about personal melancholy, mourning one’s own childhood being gone rather than the general idea of vanitas and fleeting time.” 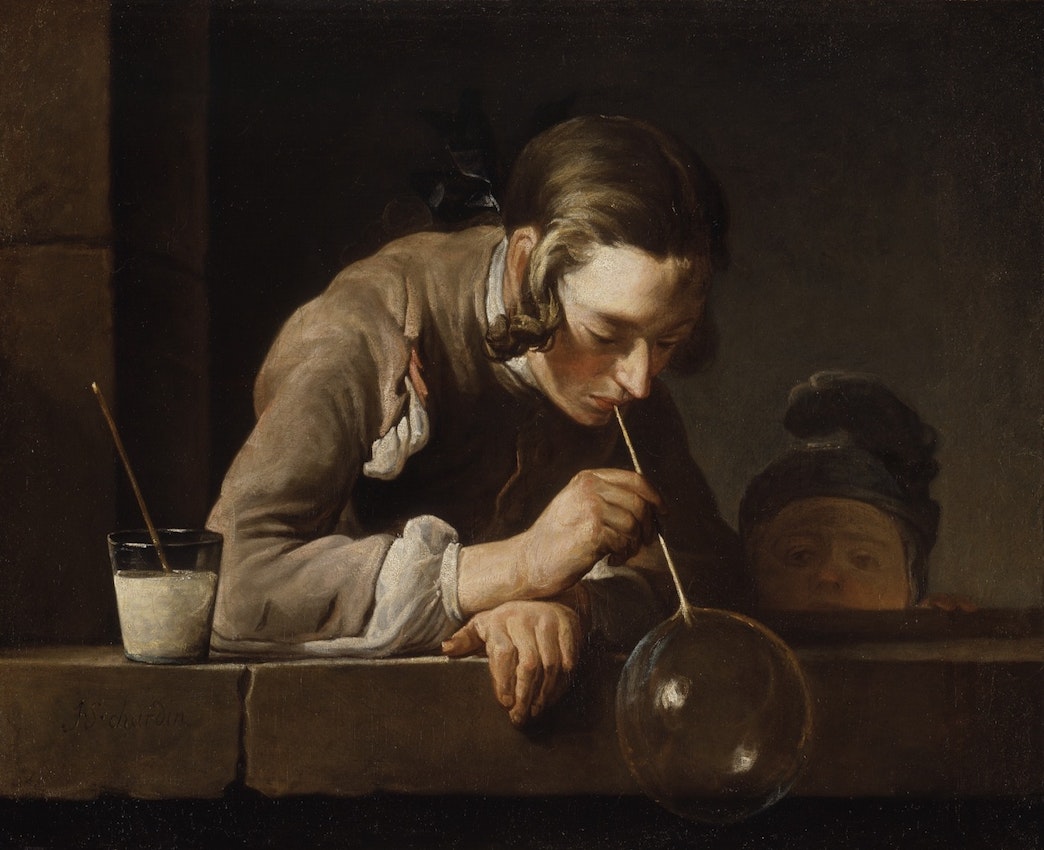 If the bubble’s brief lifespan prompted considerations of vanitas and melancholy, its shape offered a vantage onto the laws of color, light, and space. Pelagio Palagi’s 1827 Newton’s Discovery of the Refraction of Light envisions the scientist finding revelation in the stuff of child’s play. As Isaac Disraeli recorded with pith in Curiosities of Literature: “Newton is indebted for many of his great discoveries… he observes boys blowing soap bubbles, and the properties of light display themselves!” In addition to the body-as-bubble, there seems to be a parallel between this soapy form and the stuff of thought — the bubble catching Newton’s eye in Palagi’s work is at once a demonstration of optical interference and a painterly technique for visualizing units of undiscovered knowledge, retrievable from the external world. An astounding 1883 mezzotint by Alexandre-Blaise Desgoffe demonstrates the principles of interference up close, displaying a kaleidoscopic window mirrored in the soap bubble, which, in turn, becomes a window onto understanding the physical properties of light. 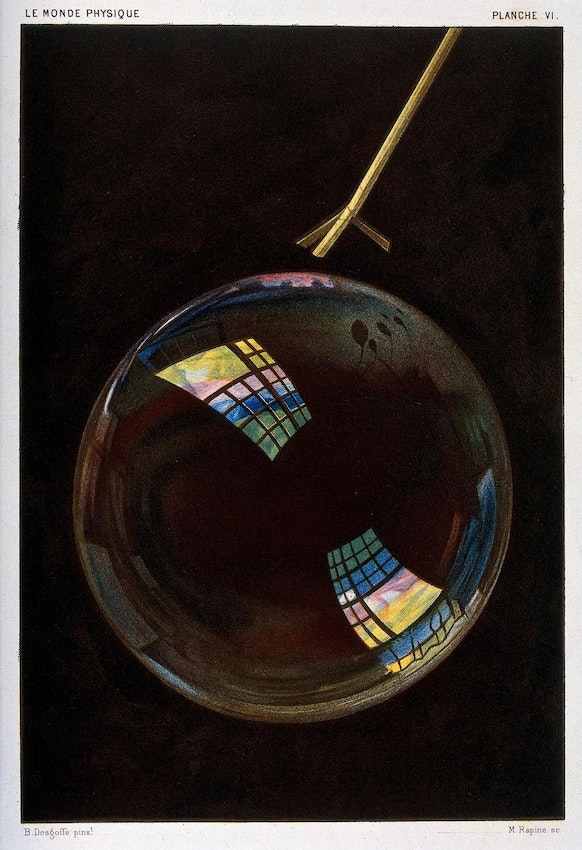 The nineteenth century is notable for its use of soap bubble pipes in a micro-genre of caricature, where the same joke gets made about varying political concerns. An 1803 hand-colored etching shows George III puffing bubbles, filled with a tiny Napoleon and the words “flat bottom boats”, “invasion”, and “little ships”. In short, the king is not concerned. Boney blows back in an anonymous 1813 print, where he sits surrounded by bubbles labeled with capitals and countries of conquest — the most recent being Rome, which his son, king of the city from birth, reaches toward. In the midst of making “Europe”, Napoleon’s basin spills to the floor, but he is not yet aware of its fall: a premonition of what the future holds. The trope merges with our modern sense of “economic bubble” in an illustration for Puck by Udo J. Keppler titled “Wall Street Bubbles:—Always the Same”, showing J. P. Morgan as a bull in both senses, blowing “inflated values” toward a desirous crowd: a commentary on the Panic of 1901.

And then, of course, there are countless images primarily about the simple magic of soap bubbles — and they are indeed wondrous. A gang of enraptured boys tussle and bubble in an engraving from Claudine Bouzonnet-Stella’s 1657 series about The Games and Pleasures of Childhood; a joyous mother produces perfectly rounded specimens for her son beneath a plum tree in a mid-eighteenth century woodblock print by Suzuki Harunobu; and various turn-of-the-twentieth-century photographs capture children completely absorbed in their task. As they fix upon the tiny fleeting world they have exhaled inside of soap film, we do something different: glance over a scene preserved by the capsule that is film stock. And this gets us to the hollow core of soap bubbles in visual art, no matter the medium. In depicting their fragility, representation robs bubbles of something essential to their form — the ability not to be.

Toyomasa Ishikawa, A youth is shown in a house making offerings before a figure of Ebisu, and outside seven boys are blowing soap bubbles. Ebisu-ko — The Festival of Ebisu (Provider of Daily Food), 1770 – Source

Pelagio Palagi, Newton's Discovery of the Refraction of Light, 1827 – Source

Untitled Japanese drawing of maple leaves in a bubble, 1878 – Source

Illustration from Roma White, Brownies and Roseleaves, 1892, reproduced in An Illustrated List of Christmas Books Published by A. D. Innes & Company, 1893 – Source