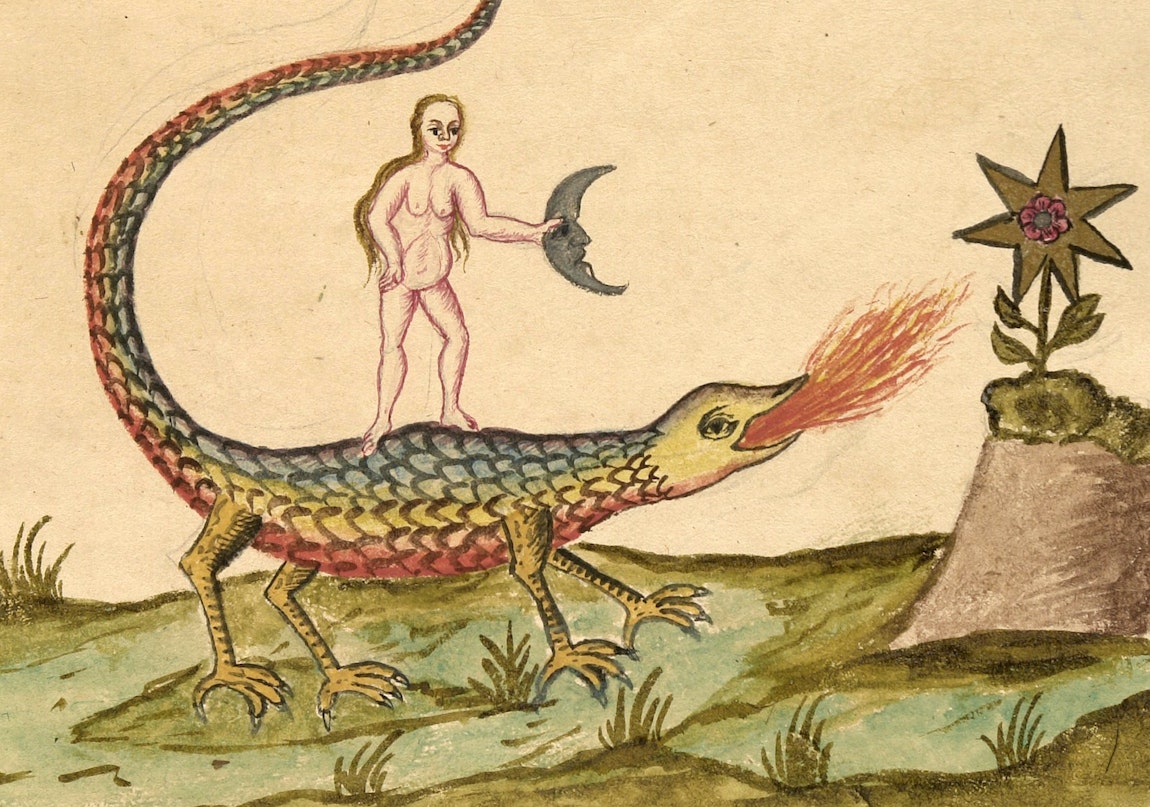 Much like the images it contains, the three-volume Clavis Artis remains a mystery of nearly unchartable depths. We know this much: the alchemical manuscript was published in Germany, sometime between the late seventeenth and early eighteenth centuries, although its title page claims it is thirteenth century (and written on dragon skin). Few copies exist and even fewer are illustrated — and one was incinerated, as if by dragon’s breath, during the 2004 fire at Weimar’s Herzogin Anna Amalia Bibliothek. The authorship is unknown, but the manuscript declares itself to be a translation of Zoroaster (or Zarathustra): the ancient Persian prophet and founder of the Zoroastrian religion. The images focused on in this post come from a copy of the manuscript held at Trieste’s Biblioteca Civica Attilio Hortis, while another version — with illustrations of almost identical content but in a less “naïve” style — can be found at Rome’s Lincean Academy (or, reading its Italian name literally: the Academy of the Lynx-Eyed).

Even the most keen-eyed and erudite occultist may find themselves adrift in these dense, hermetic images. Part of the reason for this, aside from thematic content (infanticide, a nude woman using a crescent moon like a proto-hovercraft, and scenes that look — to a contemporary viewer — like interspecies French kissing) stems from the illustrations’ nearly unparsable tone. In perhaps the most disturbing image, two mustached soldiers hold children upside down over a well, using long daggers to filet their legs. The men seem posed for our gaze. A kneeling woman observes, hands clasped, perhaps in prayer, but her face may easily be read as rapturous. Dragons, lions, and serpents appear frequently across the manuscript and the alchemical symbols for elements and planetary metals often graffiti the landscape, with mercury (☿) coming to the fore. In a somewhat comical scene, a man (possibly Zoroaster himself) looks to the sky, concerned, as a shooting star approaches a brick tower with flames blazing from its chimney. Distracted by the heavens, it appears that the man has momentarily forgotten that he is feeding some kind of giant lizard, perched on a pedestal, greedily guzzling carmine liquid from a rounded decanter. 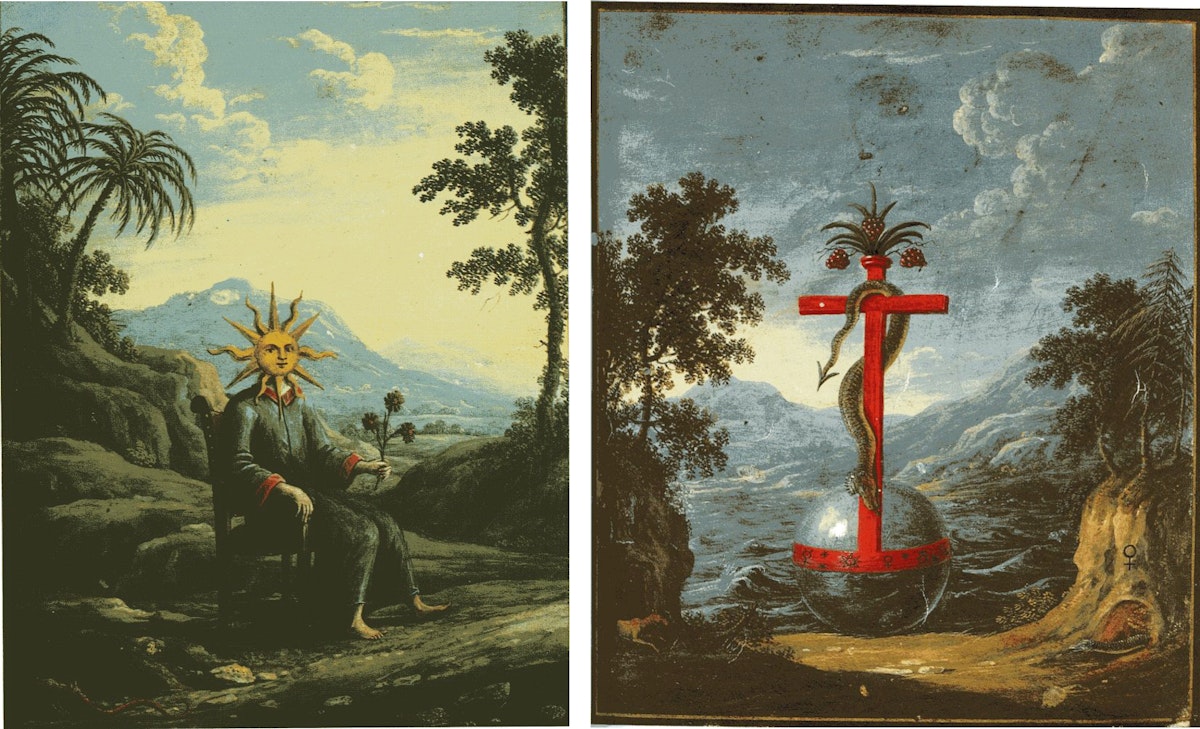 Two images from the version held in Rome, displaying a less "naïve" style than that found in the Trieste manuscript.

Guity Novin, in her History of Graphic Design, quotes the eighteenth-century English occultist Francis Barrett, who links Zoroastrianism and alchemy — present most palpably in the Clavis Artis through everpresent primordial dyads: light and dark, fire and water, sun and moon (often personified): “Zoroaster was the father of alchymy, illumined divinely from above; he knew every thing, yet seemed to know nothing; his precepts of art were left in hieroglyphics, yet in such sort that none but the favorites of Heaven ever reaped ben­e­fit thereby”. Like the second half of Barrett’s description of Zoroaster, we seem to know almost nothing about this manuscript, but the scholarly history is young. The edition held in Rome was rediscovered by the composer Nino Rota (who scored Francis Ford Coppola’s The Godfather) in an antiquarian bookshop in the 1970s. The mysteries seem only to proliferate when it comes to the Clavis Artis.

You can browse images from the Trieste copy below and see those from the Roman copy here (the latter set).