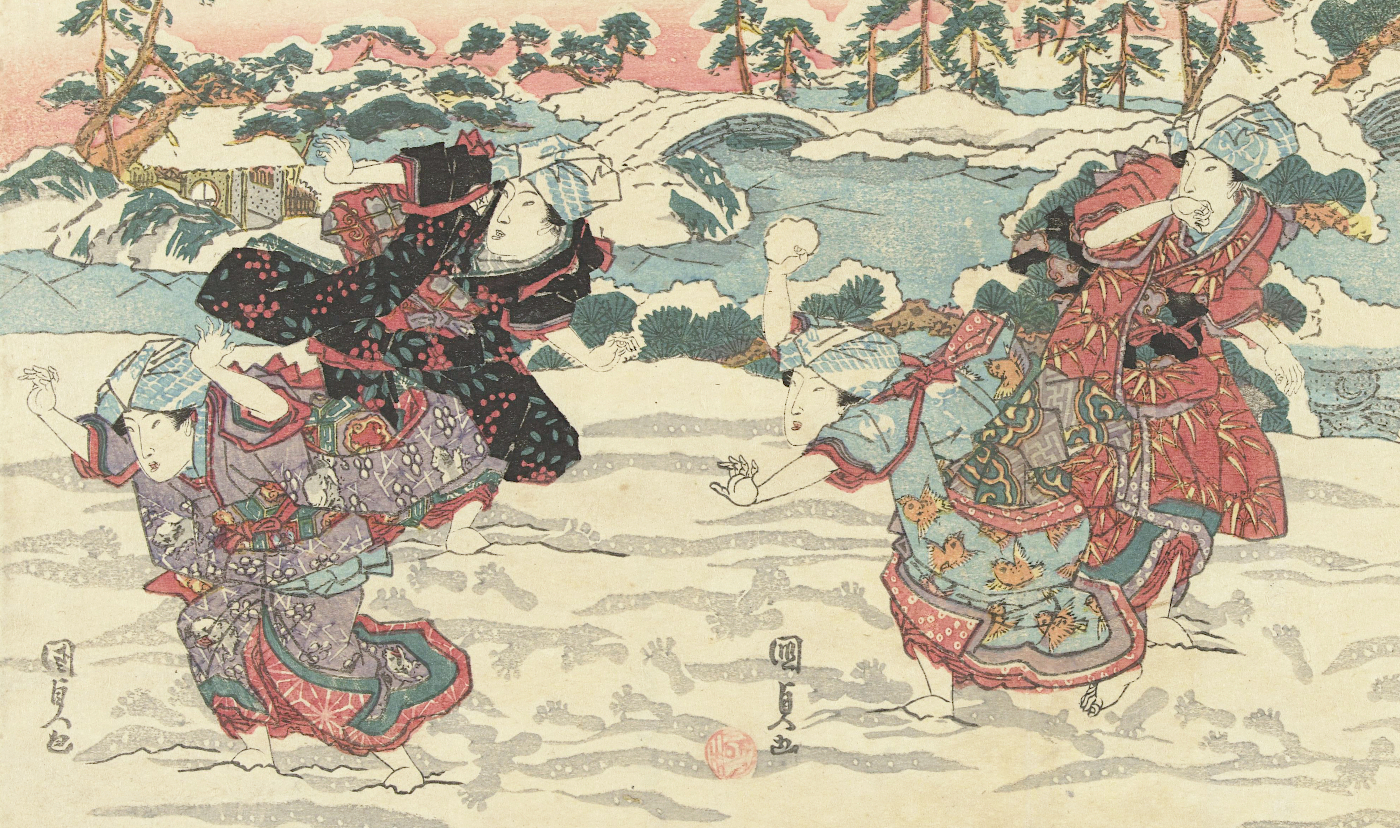 Detail from a color woodblock print by Utagawa Kunisada (I), ca. 1825. — Source.

Few seasonal activities are as universal — across time, place, or culture — as the snowball fight. As many of us head into the cold, winter months, hoping for a holiday season with frosted trees or icicles dripping like stalactites from the eaves of homes, we might also long for that slightly slushy grade of powder that makes for perfect packing. Snowmen and angels can be created later. And perhaps there will be sledding: on toboggans (for connoisseurs) or cafeteria trays (for the crafty). Yet nothing signals the year’s first snowfall quite like an apple-sized projectile cutting a parabolic path — through crisp evening air, the haloed light of streetlamps, and exhalations of foggy, illuminated breath — to make direct contact with an unsuspecting hat or coat.

And yet, like snowballs themselves, which vanish upon impact into a mist of flakes, or melt on a hesitant mitten, which has missed its opportunity for ambush, snowball fights rarely last more than a few volleys (before dispersing toward cocoa) and are rarely preserved beyond the fleeting memories of individuals, friends, or families. But certain significant battles make it into the annals of history. If the Battle of Waterloo was won on the playing fields of Eton, as the saying goes, the Battle of Austerlitz may have been planned on the snow banks of La Brienne. According to what might be more fable than history, the teenage Napoleon Bonaparte famously organized a ten day snowball fight at this military school, complete with trenches, regimens, and rules of engagement (although, according to his classmate Bourrienne’s memoirs, the combatants eventually worked their way down to gravel and stones beneath the snow, until “besiegers as well as besieged, were seriously wounded”) . 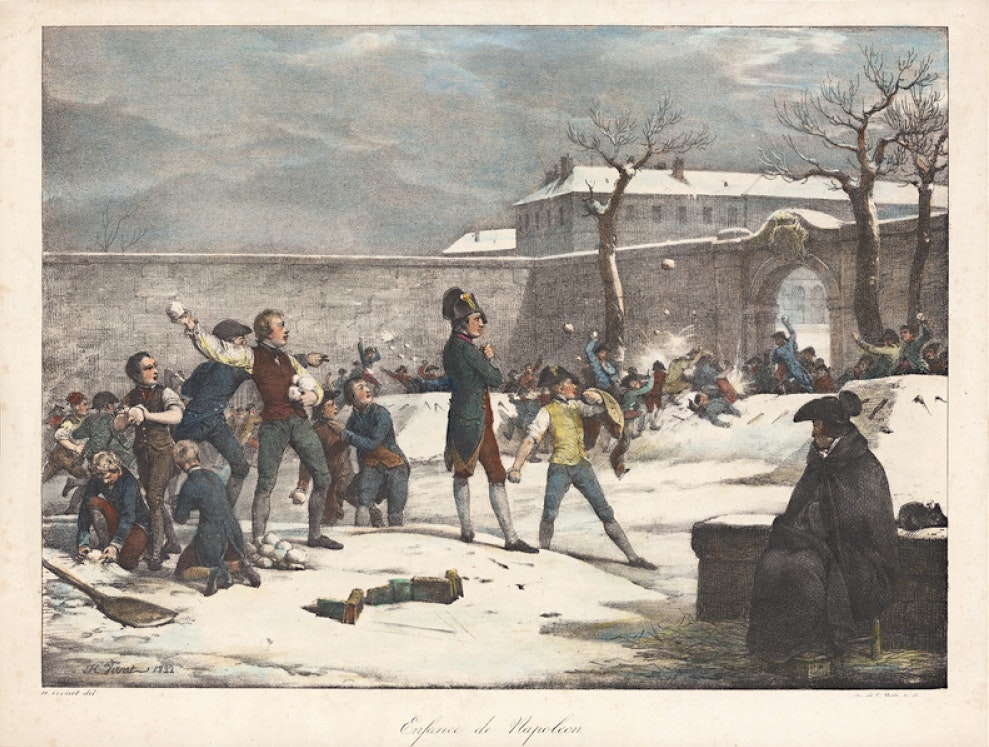 University magazines tend to preserve storied skirmishes on quadrangles. A particularly pyrrhic 1891 battle at Smith College in Massachusetts was still being debated in the women’s college’s monthly magazine half a decade later. When University of Edinburgh students engaged local residents in a salvo of hard-packed lobs, a battle broke out that lasted two days, now known as the 1838 snowball riots, which led to violent suppression by armed police (brandishing weapons heavier than frozen water) and dozens of arrests. In protest, students quickly published an extensive (and, in parts, extremely insensitive) piece of campus humor titled The University Snowdrop. “The noblest theme of the noblest poets, in all ages, has been WAR”, begins the preface, before advancing the thesis that Homer’s Iliad and Odyssey were “the evident result of a snow-ball fight at the village of Troy in Asia Minor”. 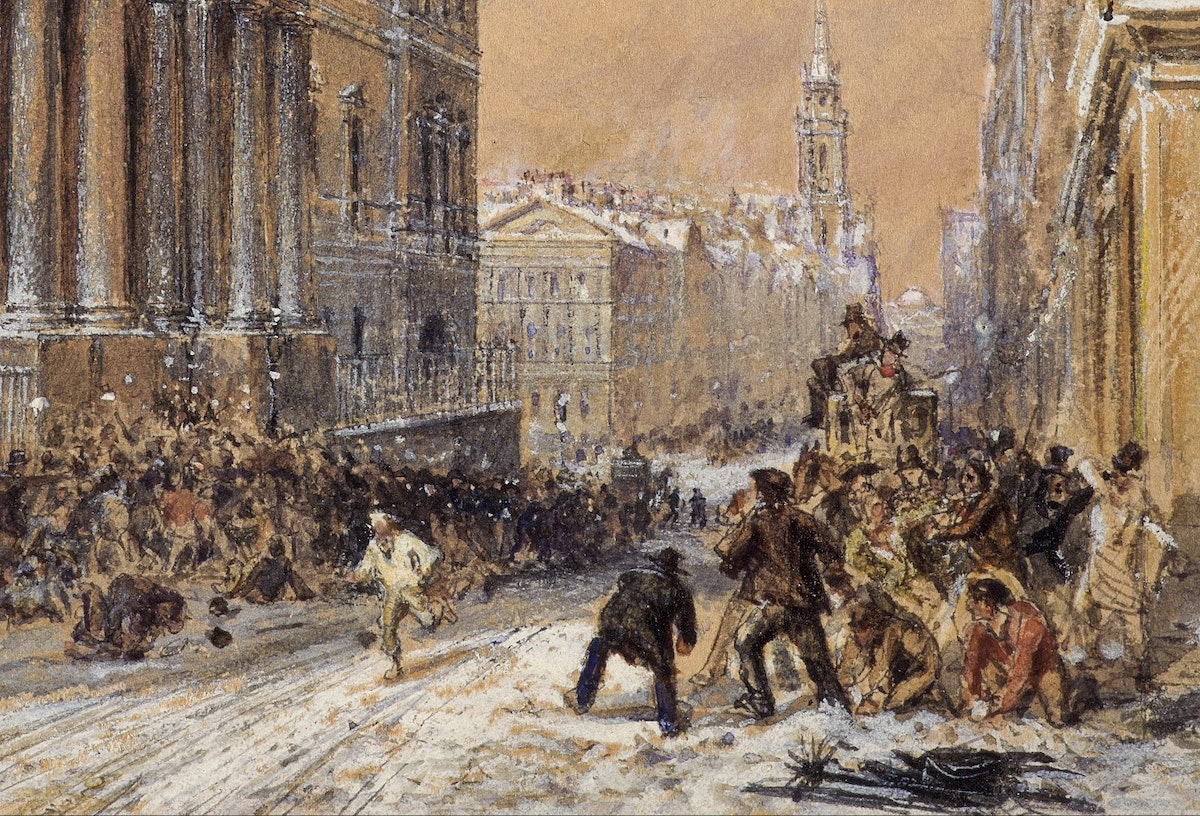 While narratives and poetry might recreate the arc of engagement, the visual arts can freeze the scene of a snowball fight for all time. Some of the earliest, preserved images of snowball fights come from medieval books of hours — illuminated, devotional manuscripts with calendrical elements — and almost always feature on pages dedicated to the month of December. Later, we find snowballs as details in larger landscapes. In Lucas van Valckenborch’s majestic Winterlandschaft (1586), airborne orbs mix with heavy snowfall represented by palette-knife impasto across a village scene. What’s wondrous about browsing the images gathered below is how little changes across centuries and continents — like landscapes blanketed with powder, difference fades in the snow fight. A fifteenth-century fresco from Trento, Italy, reveals combatants with arms cocked back (and one unfortunate recipient of a headshot), wearing expressions of minorly-sadistic pleasure or intentions for revenge — postures nearly identical to Utagawa Kunisada (I)’s woodcut snowball scenes (ca. 1825) or to those of the schoolchildren in mass combat depicted by Fritz Freund’s nineteenth-century The Snowball Fight.

Subthemes emerge in the snow-fight genre: the ball about to be launched at an unaware target, such as in Anthonij van der Haer’s mid-eighteenth century engraving, and the angry aftermath of ambush, as seen in a 1904 print from Springfield, Massachusetts captioned “Whose afraid”. There are often invocations of the viewer, either as teammate — such as the jolly, beckoning baller in Cornelis Dusart’s Maart (ca. 1690) — or as opponent, as in a heavily-colored photograph from 1920s Norway of a girl in Sámi dress playfully threatening whomever meets her gaze. And, like in all sport, there are politics and wargames. A photograph from 1923 captures a snow battle between Democrat and Republican page boys in front of the US Capitol building, while a 1946 photograph, shot from an overhead angle, records members of the Women’s Army Corps entrenched against some unseen rivals.

If there is a chance of snowfall in your part of the world, we wish you good aim and fast reflexes this holiday season.

Detail from a fresco depicting the month of January at Buonconsiglio Castle in Trento, Italy, ca. 1400 — Source

“December” from the Book of Hours of Adélaïde de Savoie, the Duchess of Bourgogne, ca. 1460 — Source

Detail from “December” in the Book of Hours of Bénigne Serre, ca. 1524. The manuscript is also known as Utopia, armarium codicum bibliophilorum — Source

Woodcut from Historia de Gentibus Septentrionalibus (A Description of the Northern Peoples) by Olaus Magnus (1490–1557), 1555. It depicts “snow castles” of the young — Source

Photograph of Princeton students after a snowball fight between freshman and sophomores, 1893 — Source

Illustration from Matilda Chaplin Ayrton, Child-life in Japan and Japanese Child Stories (1901). Illustrations by “Japanese artists” that are not named — Source

“Whose afraid”, a print from Springfield, Massachusetts, 1904 — Source

A stereograph of “Travellers lingering for a frolic with July snowballs, on road over the Haukeli mountains, Norway” by Elmer Underwood (1859–1947), ca. 1905 — Source

“A Republican--Democratic snow battle at the Capitol. Page Boys”, 1923 — Source