The Egg Dance: From Peasant Village to Political Caricature 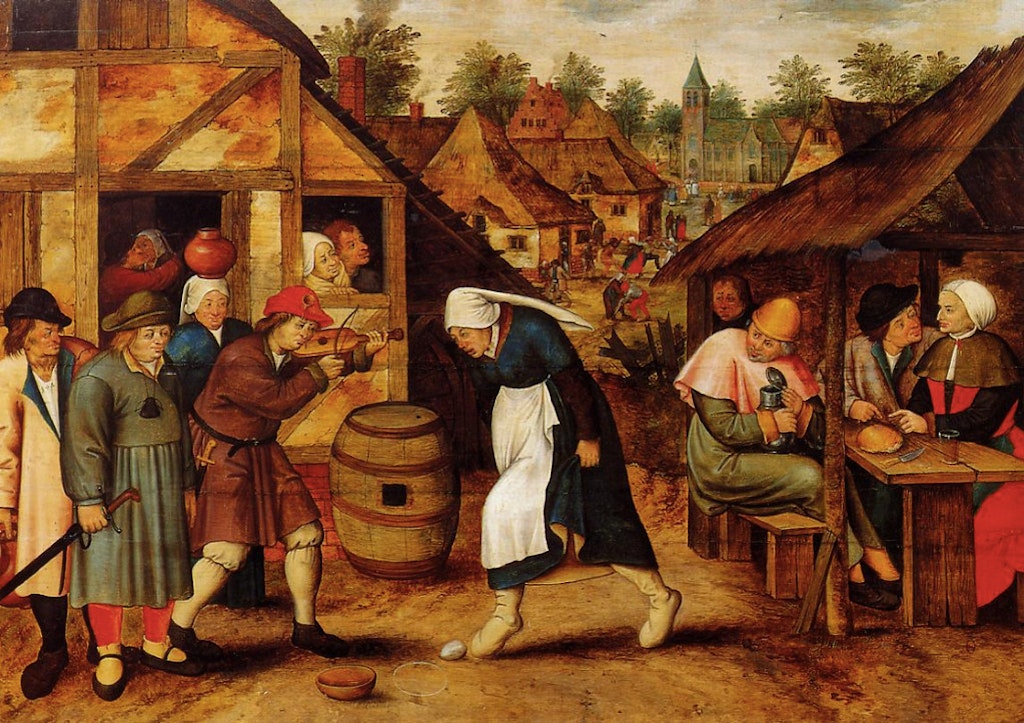 The egg dance was a traditional Easter game involving the laying down of eggs on the ground and dancing among them whilst trying to break as few as possible. Another variation (depicted in many of the images featured here) involved tipping an egg from a bowl, and then trying to flip the bowl over on top of it, all with only using one's feet and staying within a chalk circle drawn on the ground. Although, as shown in many of its depictions in art, the pastime is associated with peasant villages of the 16th and 17th century, one of the earliest references to egg-dancing relates to the marriage of Margaret of Austria and Philibert of Savoy on Easter Monday in 1498. The event was described in an 1895 issue of American Magazine:

Then the great egg dance, the special dance of the season, began. A hundred eggs were scattered over a level space covered with sand, and a young couple, taking hands, began the dance. If they finished without breaking an egg they were betrothed, and not even an obdurate parent could oppose the marriage.

After three couples had failed, midst the laughter and shouts of derision of the on-lookers, Philibert of Savoy, bending on his knee before Marguerite, begged her consent to try the dance with him. The admiring crowd of retainers shouted in approval, "Savoy and Austria!" When the dance was ended and no eggs were broken the enthusiasm was unbounded.

In his The Sports and Pastimes of the People of England (1801), Joseph Strutt describes how an "indication of such a performance occurs in an old comedy, entitled The longer thou livest, the more Foole thou art, by William Wager in the reign of Queen Elizabeth, where we meet with these lines: Upon my one foote pretely I can hoppe./ And daunce it trimley about an egge." He then goes onto describe a more elaborate performance he saw in Sadler's Wells in the 1770s.

This performance was common enough about thirty years back and was well received at Sadler's Wells; where I saw it exhibited, not by simply hopping round a single egg, but in a manner that much increased the difficulty. A number of eggs, I do not precisely recollect how many, but I believe about twelve or fourteen, were placed at certain distances marked upon the stage; the dancer, taking his stand, was blind-folded, and a hornpipe being played in the orchestra, he went through all the paces and figures of the dance, passing backwards and forwards between the eggs without touching them.

This blindfolded version of the egg dance features in Goethe's novel Wilhelm Meister's Apprenticeship (1795). Wilhelm buys Mignon from a band of travelling performers after he sees her being beaten for refusing to do the egg dance, and to thank him for saving her from captivity she performs her egg dance for him (a scene depicted in John Collier's painting shown below). According to some scholars Goethe's mention gave birth to the phrase "einen wahren Eiertanz aufführen" (to perform a true egg dance) which refers to moving carefully in a difficult situation. This particularly association of the egg dance with navigating danger was expressed time and time again in political cartoons of the 19th-century: various political figures, from Bismarck to Disraeli, precariously trying to make there way about a floor strewn with potential upsets.

Detail from above, showing one of the eggs cracked.

The Journalistic Egg Dance (ca. 1840), Andreas Geiger. A caricature of press censorship before the 1848 revolution in Austria. During the Restoration after the defeat of Napoleon in 1815, the European powers, led by Austrian Chancellor Clemens von Metternich (1773-1859), restricted the freedom of speech and expression to contain any kind of critical, nationalist or anti-authoritarian movement — Source.